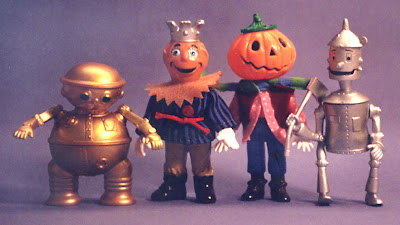 These cute little guys from Walt Disney Studio's Return to Oz were produced by Hart á Hart as part of the Japanese merchandising for the 1985 film. They each stand about four inches high, except for Tik-Tok who clocks in at about three inches. These little guys are not quite as hard to find as the big Return to Oz  "plushies," like the Tik-Tok and Scarecrow I have previously blogged about. But these little guys are still quite uncommon.

They are really well molded and the attention to the costumes for figures so small is striking.  The figures are minimally articulated, too. Their heads rotate and their arms can be posed. The Tin Woodman's legs are articulated as well. Back in the old MySpace days I made an animated GIF of Tik-Tok waving his arms and blinking. You can see it here if you like.

I got my first Tik-Tok and Scarecrow at the Winkie Con in 1987, not too long after the toys were released. I finally found the other two at a Disney Collectibles Convention in one of the Disneyland Hotels in 1989. I had to buy a set of the four to get them. So I had two duplicates. Don't ask! The two extras have been long sold off.

I've always wanted to make a Gump for them to hang out in - perhaps one day I shall! 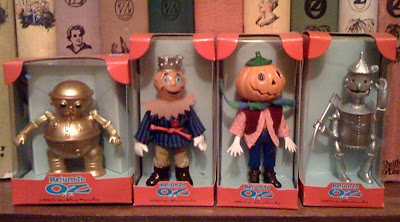 If you ever want to sell please hit me up