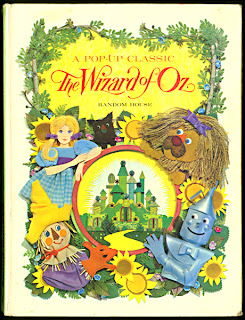 I had somehow always assumed the film was about the infamous massacre in Ireland in 1972 which later inspired the U2 song of the same name. Yet the film predates that tragedy and is instead a domestic drama in which Jackson and Finch are each having a relationship with Murray Head.

The film was enjoyable enough, Murray Head was kinda cute, and the film is set circa 1970, which is one of my favorite modern periods. Anyway, a bit into the film is a scene where Jackson and Head are baby-sitting a bunch of rowdy hippie children. The two are having a conversation when Murray Head picks up one of the kids' books and starts playing with it while he talks to Jackson.

As you may have surmised by now, it is a copy of the 1969 Random House Pop-Up Wizard of Oz! Head primarily looks at the elaborate Emerald City pop-up which came with green glasses. 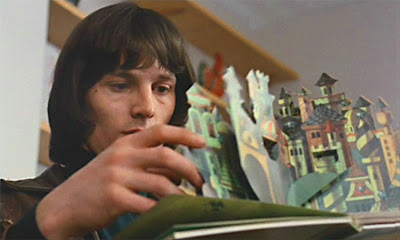 I've been toying with the idea of starting a series of blog posts on the various Oz pop-up books - perhaps this will push me into it. Oz really is everywhere!
Posted by David Maxine at 2:26 PM

I have several Oz pop-ups. Let me know if you'd like any images.

Yoo-hoo, a COLOUR Photograph! Now I can know what the actual cover looks like from the b&w scan in "the Oz Scrapbook"!