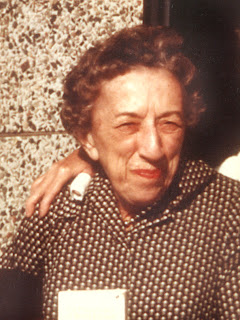 When I was in my mid-teens and just starting to seriously build my Oz collection, I went on a jag trying to get as many of my books autographed as possible. A few of the folks I contacted became good friends: Dick Martin, Elosie Jarvis McGraw, Rachel Cosgrove;  and a few politely agreed to autograph books by mail, they signed the books, and that was that: Russell MacFall, Edward Wagenknecht, Donald Wollheim, etc.

I had met Aljean Harmetz the year before her landmark Making of the Wizard of Oz was published, and I got a signed copy from her the next year. But that book also had a foreword by Margaret Hamilton and I really wanted to get the foreword signed, too. So I wrote Hamilton a letter asking if I might send my copy of the book to her for an autograph (with return postage of course) and I didn't hear back . . . and didn't hear back . . . and then finally a letter from Margaret Hamilton! It was postmarked July 28, 1980, seven months after I had first written her. 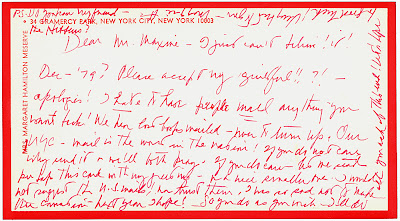 She wrote in quite a scrawl, up the side of the page and then back across the top where she signed it, "Maggie H." (upside-down above the words New York in her printed address). Here's what she wrote:


Dear Mr. Maxine - I just can't believe it! Dec. '79? Please accept my guiltful!!?! apologies! I hate to have people mail anything you want back! We have lost books mailed - never to turn up. Our NYC mail is the worst in the nation!If you do not care why send it and we'll both pray. If you do care - let me suggest you tape this card with my greetings or a nice smaller one. I would not suggest the U.S. mails, nor trust them. I was so sad not to make the convention - next year I hope! So you do as you wish and I'll do all you ask at this end. Let's hope for good luck!

Very best to you - Maggie H.
PS - Do you know my friends the Hibbens?

Well, as it turned out I received her letter about a week before the 1980 Munchkin Convention for which she was to be a special guest. I took my book with me, and she signed it there, in person. The first thing that struck me was how very tiny she was. True, I was six feet tall, but my mom was 5'- 3" and even she was surprised by how tiny Margaret Hamilton was!  At lunch I was able to sit at her table and I remember looking at her hands, wondering if I could see any scars from her accident while filming in Munchkinland. I couldn't - they just looked like spotty old lady hands.

Somehow no one much discussed The Wizard of Oz. The main story I recall Hamilton telling at the lunch table involved a film called These Three (1936), the first film version of Lillian Hellman's The Children's Hour, in which they turned the child's lie about lesbianism into a lie about heterosexual adultery. It's actually a good film, despite the meddling.

There is a scene where the child, played by Bonita Granville, admits the lie after it has destroyed three lives, and Margaret Hamilton (playing a maid) has to slap Granville very hard. They shot the scene several times, Hamilton kept pulling back on the slap, and Granville wasn't making the slap believable with her acting. Finally, director William Wyler had had enough, and he got rather angry. They were wasting time, money, and film. He told Hamilton to really slap her, slap her good, so they could get the shot in the can and move on. As I recall the story, Wyler told Hamilton in private so Granville would react properly. Action! Hamilton hauled back and slapped Bonita Granville hard across the cheek. In the film Granville looks stunned, pauses for a moment, begins to shake slightly, and the tears pour out and she runs up the stairs. It's great! Hamilton was very upset over it. She said after Wyler called cut, she could still see her hand-print on Bonita Granville's face. She went out and bought Bonita a gift. Some Wicked Witch!

I was very glad I got to meet Margaret Hamilton. 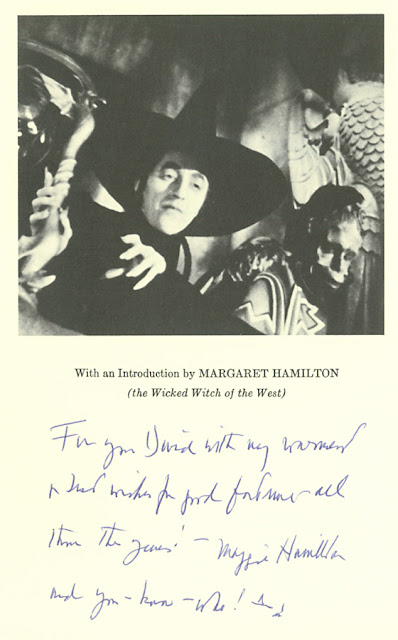 She means Frank C. Hibben who was a famous (some would say infamous) archeologist, anthropologist, and professor at the University of New Mexico in Albuquerque. I lived in Albuquerque at the time I wrote Hamilton.

While I did not know Hibben personally - I knew who she meant. Hibben was the subject of an urban-legend (going around when I was in sixth grade) that he had found a frozen mammoth and had served mammoth-meat appetizers at a UNM function.

Another great story, and I love the allusion in the title.

Terrific story, David. And I like the lagniappe about Hibben, too. Have you ever thought about writing a biography about your life in Oz fandom? I think it would make a fascinating read.