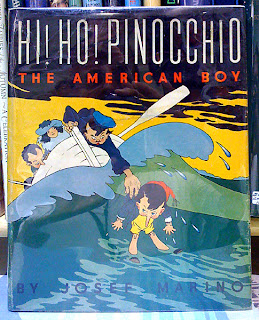 At a recent book show I came across a group of very pretty picture books in dust jackets. What initially caught my eye as I scanned the shelves were the Reilly & Lee imprints on the spines. Reilly & Lee, of course, was the original publisher of the Oz books.

All of the books in question were illustrated by William Donahey, and all but one were his Teenie Weenie books. The non-Teenie Weenie title was Hi! Ho! Pinocchio - The American Boy by Josef Marino (in actuality a pseudonym of Roy Judson Snell who wrote almost two dozen boy's series books for Reilly and Lee under his real name.)

Hi! Ho! Pinocchio, published in 1940, tells of the famed puppet's immigration to America, painting a portrait of the Italian immigrant experience just before World War II. The book actually seemed kind of interesting, but my interest was dampened by the price tag. Before I put the book back on the shelf I flipped thru, looking at all Donahey's illustrations and color plates and finally at the jacket flaps. The back flap was an advertisement for John R. Neill's first Oz book, The Wonder City of Oz, also published in 1940. I didn't particularly recognize the text so I took a photo - but it turns out that it's the same text that's on the front flap of the Wonder City dust jacket. Assuming most of my readers may not have Wonder City in jacket, and they probably don't have plans to rush out and buy a copy of Hi! Ho! Pinocchio's dust jacket either, here is the Wonder City ad for your enjoyment.

The Wonder City of Oz
Life in the Wonder City is as pleasantly Ozish as everything else in Oz. In the first place, the houses are alive and the animals - tiger-lilies, bull-rushes, and horse-chestnuts - grow like plants in gardens, and they talk. And then there's the Turnstyle, where all the royalty - or anyone else in Oz can get clothes. They go through the turnstyle and come out clothed just as they wish by pressing buttons on the arms of the turnstyle. Jenny Jump - she of the two fairy ears, one fairy eye, one fairy foot, and eight fairy fingers - runs the turnstyle.

All sorts of things go on in the Wonder City. The town crier blubbers and weeps because Whistlebreeches, Jenny's errand boy, won't stop whistling so people can hear him cry. And the Wizard makes some very strange changes in Jenny. She and Jack Pumpkinhead are made prisoners behind chocolate bars by chocolate soldiers. Jack Pumpkinhead has a glee club composed of old shoes. All unnecessary squeaks are removed from the shoes and kept in a sound-proof bag. They sing Shoebert, Shoeman, and Golden Slippers.

With such people living there and such things going on all the time you can see that almost anything might happen in the Wonder City. And does. Adventures and magic and lovely, funny people doing funny things - every single page of THE WONDER CITY OF OZ is chock full of them. It's the most exciting, the merriest, the most deliciously astonishing Oz book of them all.
Posted by David Maxine at 7:00 AM