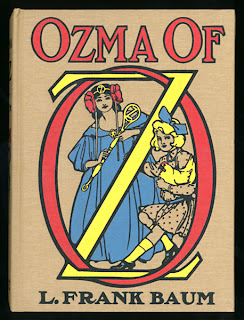 I must admit I kind of hate writing these critical reviews of the new Bradford Exchange facsimile Oz books. I so want to be supportive, but each book makes that harder to do.

Some slack could be given to their Wonderful Wizard of Oz. The original is an extremely complex book, and the 1900 method of printing the color plates in Wizard was nearly unique (not that Bradford couldn't have gone to some extra expense and duplicated the original printing technique). My review of The Marvelous Land of Oz can be read here.

Now on to the latest release, Ozma of Oz. When I first opened the book I looked at the endpapers. They seemed decent and indeed they are. They are a little bit grainy - but the color is pretty good. If the entire book were at the level of the endpapers, I doubt I'd be complaining over some visual noise in the scan and printing.

The next picture I closely examined was the frontispiece - one of my favorite images of Ozma ever. I thought it looked really good, the color is smooth! They solved the graininess problem! Then I compared it to my first state copy of Ozma of Oz and I'm pretty sure I know how they did it: Bradford recolored the frontispiece image from scratch. It's the only image in the book where the color is completely smooth, and the "shapes" of the blue in Ozma's gown do not match the shapes in the original color design. It looks good (although Bradford's blue is a little too green) - but it's a fake. If only they'd faked their way through the rest of the book.

The volume is beset with grainy, blobby images. The colors are rather off, too - especially the orangey red. There may be some florescent color in the original 1907 red ink and they simply couldn't capture it with a CMYK scan - but they could have had the printer swap out the magenta for a custom ink if they'd wanted to. Let's start looking at examples. In all the following scans my first state Reilly and Britton Ozma is on the left, the Bradford Exchange version (BE) is on the right.


This is a typical example of one of the better pages, but there are still problems. The clouds should be white with blue shadows. In BE the clouds are yellowish with blue shadows. Now, sharp eyes might say the original on the right has even yellower clouds. That's true, but that's the color of the paper after 104 years of aging. There is NO color in the "white" areas of the clouds in the original. The problem is that BE is not color-correcting to remove the paper color from the image; they are only cropping out the original paper color in the margins. This leaves "white" areas in the artwork looking kinda yellow, especially in comparison with the garish snow white paper they are using. A clear example of this is the right half of the list of chapters where the "white" box behind Nick Chopper's legs is obviously printed in yellow when compared to the adjacent paper. In the original, the box behind Nick Chopper is not printed in any color, allowing the paper to show. In proper color-correction you need to pick a white area in the artwork and color correct THAT until it's white. This lack of proper color-correction has made virtually all the colors too yellow when compared to the originals. That said, I also think the BE paper is far too white. The original doesn't show any signs of heavy acid content, doesn't appear to have foxed, quite simply I think the original is printed on a buff paper. Many publishers like printing on buff-colored stock; crisp white can hurt one's eyes.

One interesting anomaly appears in the example above. Dorothy's dress is light blue in BE, but it's white in my first state copy. Is this an unreported variant or did BE "correct" it to be blue? Dorothy's dress is blue in most other pictures in the book. I'd be curious to hear if anyone actually has a first state Ozma with Dorothy in blue on page 125.

I wish the problems were only in the color reproduction, but the grainy blobbiness has spread to the black and white reproduction as well, as a look at the above example shows. There is no excuse for that. A 1200 dpi bitmap tiff scan will print any Oz book line art you like. The original is quite smooth and even. BE is just ugly!


The chapter title illustrations are the worst defect in the book. All of them are bad. It's by no means perfect in the 1907 printing, but why isn't BE the same? BE is globby and has no subtlety. Consider the example above. In the original, the stripe at the foot of the bed, the breakfast tray, and Dorothy's face are all a lighter pink. BE has given Dorothy a hideous skin disease.


Here again the grain and visual noise has overwhelmed the reflection of Langwidere. But BE has done some Photoshop tinkering and recolored the cabinet into a solid blue color. It's inauthentic, but it's prettier than what follows.


In the 1907 edition this picture of Dorothy is soft and lovely; it almost looks like a pale blue watercolor wash. The BE version looks like an extremely poor color photocopy from about 1975.

And there's lots more of that throughout the rest of the book as shown above. Why? Isn't anyone looking at the source material and the proofs side by side?

At first glance the BE cover seems lovely. But compared to the original stamping, the design has lost a great deal of crispness. The elements of BE's spine - title, author, and picture of Ozma - have been shrunk. Also, the debossing pattern is much more elaborate in the original, where all of the black lines are sunk in to the cloth. In BE, the red, yellow, and blue areas are debossed along with the black. Lastly, in the original, the cover inks are glossy. But they aren't in BE.

I would offer one small bit of advice to BE - they need to be using more than one copy to reproduce from. No individual Oz book is without defects and no two copies are truly identical. An illustration that's a bit blurry in one copy may be perfect in another. A plate that's a bit off-register in one may be perfect in the next copy you examine. This lesson really sunk in when I talked with Peter Glassman of Books of Wonder while he was preparing his reprint of Little Wizard Stories of Oz. The original Reilly and Britton printings of that book and the six individual story volumes are all rather clumsily printed. But what's off in one copy is great in another. Peter Glassman borrowed perhaps twenty different copies from collectors in the hopes that he could find at least one good clear image of each page from the two dozen copies he shot negatives from. I loaned him three books from my collection alone. So is the Books of Wonder Little Wizard Stories of Oz a facsimile? It's authentically photographed from original printings - but no single original printing ever had the plates reproduced as "in register" as the Books of Wonder edition did.

Maybe the next book coming from the Bradford Exchange, Dorothy and the Wizard in Oz, will be fine. The color plates aren't as problematic as Wizard's or Land's, and there aren't as many color illustrations as in Ozma.  But I must admit I have grave worries over the line quality we'll see in The Road to Oz. It's a really hard book to scan on that 1909 pulpy, colored stock.
Posted by David Maxine at 7:02 PM

I hope you're sending your reviews to the Bradford Exchange. There is no excuse for the sloppy job that they are doing. It's really a shame.

I only have a couple of the Books of Wonder editions, but I've always been more than satisfied with them. You'd think a uniform edition of works as significant as these would be a no-brainer.
Keep the informative reviews coming, David!

These are not just poor, they are terrible.
Thank you so much for showing these to us.
There is no way I'd buy them now.
BE should be ashamed to release such terrible copies.
The chapter opener for Tik-Tok the machine man looks like someone went over it crudely with a cheap crayon.

I'm not as optimistic as you about D&theWofOz, I bet they ruin the excellent colors used in the plates.
I kind of shudder when I think of what they'll do toRoad, Ec and the beautiful Patchwork Girl of Oz!!!