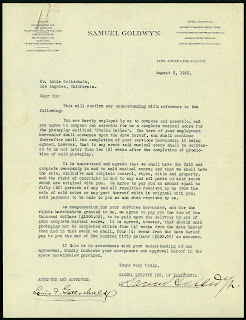 While my interest in Baum and Oz has always been book-focused, I do have a certain fondness for Oz memorabilia from the many stage and screen adaptations. I also like the weird, unusual, and unique sort of Ozzy collectible. The document shown at left is such a thing.

It is a contract between Louis F. Gottschalk and Sam Goldwyn, enlisting the services of Gottschalk to write the score for the 1926 film version of Stella Dallas.

Gottschalk is best known to Oz folk for writing the music for L. Frank Baum's musical comedy The Tik-Tok Man of Oz (1913), the scores to accompany the various Oz Film Manufacturing Company movies, and the music for the abandoned Patchwork Girl of Oz "Children's Theatre" musical. Gottschalk was also a close friend of Baum's during the Hollywood years - both men were instrumental in forming "The Uplifters," a social and theatrical enterprise associated with the Los Angeles Athletic Club.

Sam Goldwyn is the man who bought the film rights to The Wizard of Oz from the Baum family, beginning the process of developing a certain film starring Judy Garland. Goldwyn is also the "G" of MGM.

I really like that this piece of paper connects to otherwise disparate Oz-related names. It's just kind of neat. While the 1926 Stella Dallas film survives, Gottschalk's score seems to have been lost. This film just barely predates sound on film and the score would have been played live in the theatre by either orchestra or organ, depending on the venue. 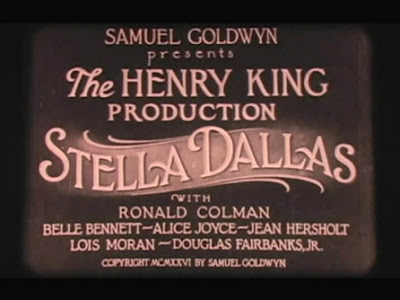 On a side note, Gottschalk's daughter, Gloria Gottschalk, had a small part in the film. She played one of the Bridesmaids.

If you'd like to hear some of Gottschalk's music you might consider our CD Before the Rainbow - The Original Music of Oz. You can listen to two different suites from The Tik-Tok Man of Oz, as well as all of the themes from the silent film version of The Patchwork Girl of Oz.

Below is a video clip of the marriage scene from the film. I can not tell which Bride's maid Gloria might have been and I do not think the humdrum organ accompaniment is Gottschalk's original score. Still, give it a watch.

I'm actually surprised that the silent Stella Dallas survives. Goldwyn junked most of his silents when sound came in.

The film is available via this link:

There are quite a few other clips on YOUTUBE as well. Possibly the entire film in chunks.