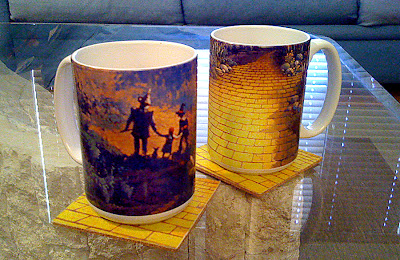 One of the perks of writing this blog is that on occasion folks send me nice things. These two mugs arrived in the mail recently. They're very handsome. The artwork wraps nearly the entire mug, and each mug comes with a cork-bottomed yellow brick road coaster.

The artwork is by Don Peters who has exhibited in the Metropolitan Museum, the Whitney Museum, and the National Pastel Society of New York. He began his career in Hollywood in 1953, where he worked with Walt Disney, MGM, Paramount, Twentieth Century Fox, Warner Bros., Columbia, and Filmation. In 1964 Don won the Venice Film Festival award for his screenplay, The Soldier. Also, in 1966 Don received the Academy Award Nomination for the original screenplay and story Naked Prey. But of special interest to Oz fans is that Don was a Background Artist for Journey Back to Oz.  Don Peters passed away in Hollywood Beach, California, on October 4, 2002, at the age of eighty-one.

These two mugs (and another still), as well as a limited-edition lithograph, are available on-line from Diane Steele.com. Click here to check them out!  Diane will also be attending the Winkie Convention next month and, of course, she will have these great mugs available at the convention, too.