A number of years ago I was designing a play on the east coast and was out prop-hunting in local junk shops. In one I spotted a most frustrating treasure - a large stack of bound volumes of the Philadelphia Public Ledger from the era when Ruth Plumly Thompson was writing her weekly "Children's Page." These volumes measured about 18" by 24" and were about five inches thick. 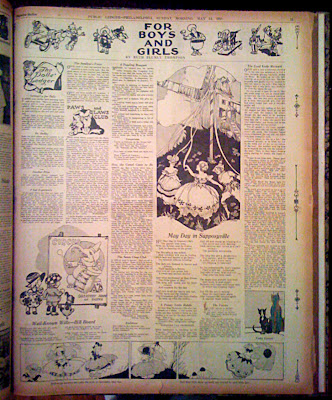 Several years earlier, before Eric and I moved to San Diego, we spent a weekend in the Philadelphia Free Library printing out a complete set of Thompson's "Children's Page" from microfilm, so we had all the RPT material contained in these gigantic books. But still, looking at the crisp clear pages, after so often consulting the splotchy photocopies, made it painful to leave them behind. How could I do otherwise? These monster volumes each weighed 40 pounds and were the size of a coffee table!

In the end I had to have at least one. I bought the volume covering April 1 through May 15, 1919. Each Sunday featured RPT's "Children's Page" and I hoped that just maybe there would be an L. Frank Baum obituary, too. He had died on May 6, 1919. Alas, there was none to be found.


This blog-post came about because Eric pulled the volume out of the closet (where it lives with several equally large volumes of newspapers from New York City circa 1903) because he remembered there was an RPT mermaid story in one of the "Children's Pages," and he thought it would make a good TIGER TALE for this month on the Hungry Tiger Press website.

Ruth Plumly Thompson's short tale "The Good Little Mermaid" was originally published May 11, 1919, in the Public Ledger. Click here to read it! And if you like Mermaids and Oz, come join us at the Winkie Con 2011. It's less than two weeks away! Our theme is "Oz Under the Sea" and we're celebrating the centennial of Baum's mermaid fantasy The Sea Fairies and the eightieth birthday of Thompson's rollicking Pirates in Oz.

Lugging a suitcase with Large 1919 newspapers from the shop to your motel, then NYC, then Kennedy airport AND to your house in San Diego . . . that's good exercise! Upper body and Arm Strength!

I must tell you how disappointed I am that your cat is not made of glass!