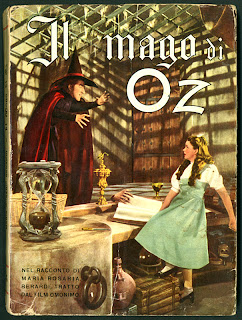 I recently acquired an Ozzy foreign edition I had wanted for a long time. It is the 1948 Italian "movie" edition published in Rome by Societa Apostolato Stampa. This publisher had first released a translation of Baum's Wizard of Oz in 1944, under the title Nel Regno di Oz.

But in 1948 the publisher released the volume seen at left - Il Mago di Oz - profusely illustrated with stills from the MGM Wizard of Oz film. I had come close to getting the book when I was a late teenager, but the dealer wouldn't part with it for some unexplained reason. Back then I had flipped through the book, so I knew it was handsome and that I wanted it. So when the chance arose to finally get one recently, I was most pleased. 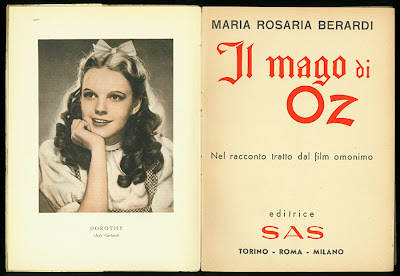 When the book arrived in the mail last week, I was surprised by two things. First, the book was even more heavily illustrated with photos form the MGM film than I had remembered. It has thirty tipped in black and white images, as well as a color frontispiece showing Judy Garland as Dorothy. Some of the images are from well-known stills, some are from publicity shots, but a few are seemingly taken directly from the film. They are very handsome and clearly reproduced, such as the one below showing Dorothy in the Wash and Brush Up Co. 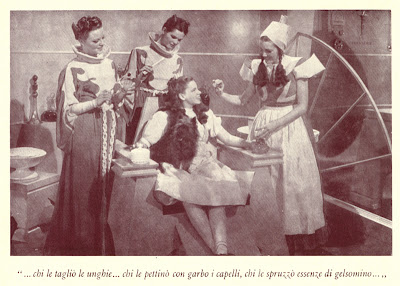 The other big surprise was that the book is not a translation of Baum's story but a "novelization" of the film by Maria Rosaria Berardi. Thus, Miss Gulch and Professor Marvel and the Horse of a Different Color are all featured in the text. I think this is probably the first-ever "novelization" of the MGM film.

The book must have done well, as later in 1948 they issued lovely oversize translations of the first five Baum Oz books. I'll tell you a bit more about them in a future blog. Ciao!
Posted by David Maxine at 6:00 AM