Just a Touch of Humbug

On Saturday July 9, 2011 the Winkie Convention will be honored with a two-man concert from Joe Cascone and his partner, David Haines. Joe Cascone has been Artistic Director of the Toronto Civic Light Opera for thirty-three years (a company he founded at the age of fourteen). A life-long Oz and Baum enthusiast, he wrote the most faithful stage adaptation yet of The Wonderful Wizard of Oz, which premiered in Toronto in 2000. Featuring Joe in the dual roles of Baum and the Wizard, and David as the Cowardly Lion, it has been revived twice so far, in 2002 and 2010, to rave reviews and audience reception, opening the original Oz concept up to new audiences. Joe and David recently co-starred in the Canadian premiere of the off-Broadway hit musical The Big Bang which is now planned for a return engagement next season.

Below is an excerpt from a more lengthy interview with Joe Cascone to be published in the Winkie Convention Program Book.

So how did you get into Oz? Was it from the movie, the books?
My earliest recollection of anything Oz was the Saturday morning Videocraft cartoons, Tales of the Wizard of Oz, which (as a five year old) I found rather entertaining. By the time I had reached the advanced age of six, my parents invited me to watch the annual telecast of the MGM movie, which fascinated (and terrified) me. I most remember being enchanted (and terrified) by it. This first viewing of the classic film (in March of 1970) got me onto a major obsession with all things Oz that lasted throughout my childhood.

Some people who love Oz as a child drift away from it as they enter their teen years and then find it again as an adult. Others stay with it for good.
Nowadays, I think that extreme childhood obsessions are understood better than they were  But once I got to my teens and puberty, etc., I managed to put it into perspective and left it for a while, yet always respecting the profound significance that Oz had on me. As a young adult, I started to reclaim much of my lost childhood collection of Oz memorabilia and regained a strong interest and fascination in it all once again. The Oz stories still affect me deeply to this day.  As an adult, I was amazed to find out how many others shared my experience as children and to hear how Oz has informed their lives and life choices. 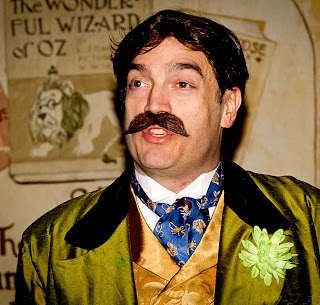 Had you long wanted to write a new WIZARD OF OZ musical? How did your collaboration with James Doyle come about?
I had actually written a number of stage adaptations of The Wizard of Oz in the 1980s, one of which we produced in 1986. The only thing it was missing was an original score. I was revising the adaptation in 1999 with the intention of presenting it with a collection of Oz songs from the past century (in anticipation of the Oz centennial) to give it a real “journey” feel. In the course of this, I connected with [David Maxine] who put me onto James Doyle as a resource for uncovering more of the original 1902/03 arrangements. Through our tremendous amount of correspondence, I discovered that James had an on-again-off-again Wizard of Oz project he was working on, an original score for a stage adaptation.  We thus rolled up our proverbial sleeves and decided that this “centennial” production would be our own work, based tightly on Baum’s novel and using only theatrical conceits of the Gilded Age to move it along. It proved to be extremely successful in its premiere production in December of 2000.  James and I were working on revisions to the show for a revival when he died very suddenly and tragically in 2002. I did a number of alterations to the script and score on my own and the show was a hit all over again in December of that year.  More revisions were done for its most recent staging in December of 2010, which proved to be even more successful than the first two times.

What was the biggest challenge in bringing Baum’s WIZARD to the stage? What scene or scenes proved the hardest to pull off or were surprisingly easy?
Theoretically, the hardest part of bringing Wizard of Oz to the stage was to convince everyone involved (and to no small extent the audiences) that this was NOT to be a rip-off of the famous MGM film. This was to be 100% authentic to Baum’s book.  You’d be amazed at how many responses we got to the effect of “There was a book, too?” Onstage, the biggest challenges were the different adventures that Dorothy, the Scarecrow, Tin Woodman, and Cowardly Lion encountered on their journey. While staging a cyclone offers a multitude of exciting artistic opportunities, how does one effectively stage Kalidahs falling into a bottomless pit? Even bigger was the timing standpoint.


If we had let it, the show could have run four hours as we tried to depict every event in the twenty-four chapter novel. The first production was nearly three hours long. In 2002, we had it trimmed to two and a half, and by 2010, it was much tighter at two hours and ten minutes, still telling all the great story. Along the way, we made some compromises and streamlined several adventures into a medley type number called “Further Along the Way,” and we made some omissions as well (the Witch’s wolves, crows, and bees, as well as the whole Quelala and Gayelette backstory). Otherwise, the story is pretty much all there! And in the end, of the thousands of people who saw it, and the many, many people who took the time to write, e-mail, or call in afterwards, there was literally only one dissenting response from an audience member who felt shortchanged at not seeing a retread of the movie.  Not a bad record!

So what’s your favorite Oz book?
How do you choose your favorite child?  Of course, The Wonderful Wizard of Oz is far and away my favorite for its subliminal messages throughout, even though I do believe that Baum didn’t necessarily recognize that they were there as he wrote “solely to pleasure children of today.”  I have much admiration for the excitement he concocts in The Scarecrow of Oz, and I really enjoy the entertaining (if slightly gruesome) prequel aspects of The Tin Woodman of Oz.  For a favorite non-Wizard Oz book, though, I’d have to say Ozma of Oz because of the fun that the story has with revisiting all our friends together again for the first time and in a believable and new scenario.  It also shows us the first time that Baum really took us in the direction of a “series,” even though the book stands alone well, too.

So how do you feel about coming to your first Oz convention?
I’m actually amazed that it’s taken me this long to get to one.  As a member of IWOC for nearly thirty years, the stars have never quite aligned until now.  I’m very excited at the prospect of connecting with other Ozophiles and experiencing an Oz Con first hand.  And of course performing some wonderful music in our retrospective of the past hundred and ten years of Oz is an exciting and humbling challenge that David and I both hope will be as enjoyable for the audience as it has been for us.
Posted by David Maxine at 6:00 AM

I hope I get to actually meet and talk to these guys at the Convention, after e-mailing Joe a few times.