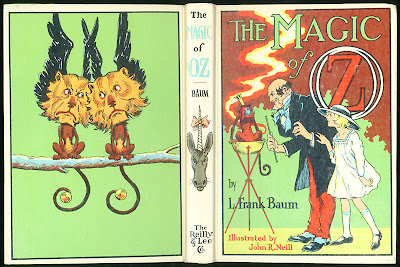 Now that The Tin Woodman of Oz is known to be in good working order I think today we shall try to learn a bit about the "white edition" of The Magic of Oz. 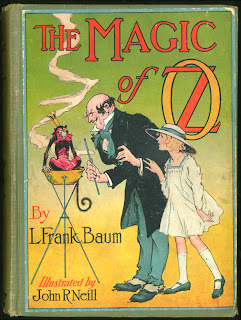 The front cover art is quite similar to John R. Neill's original (at right). Dick Martin has modified the "Oz" and other lettering, and added some plant growth behind Dorothy and the Wizard, as well as making more of the magical smoke emanating from the golden bowl on the tripod.

The spine illustration of Loo the Unicorn is loosely based on the drawing of Loo from the chapter heading on page 87, but for the most part this is a wholly new Dick Martin drawing. The back cover, showing the two Li-Mon-Eags, is based on one of Neill's color-plates from the 1919 first edition of Magic. This drawing has been completely redrawn by Martin, which is especially evident in the wings. In many ways I prefer Martin's more vibrant color scheme. 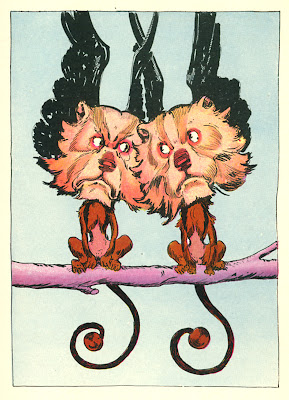 Now, let's open the covers and take a look at the interior of the book. 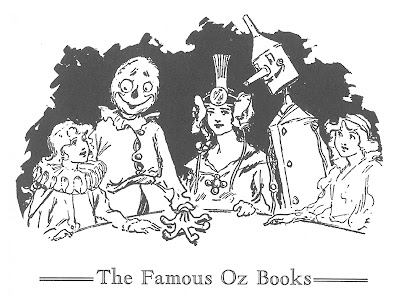 The "Famous Oz Books" ad (above) is sort of interesting. Dick has cobbled it together using two different portions of the original Tin Woodman of Oz endpapers (seen below). 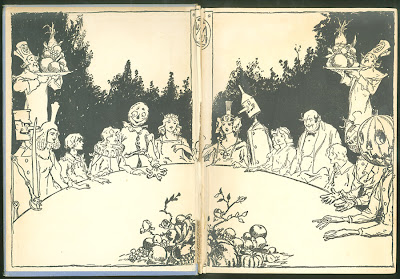 For a change Dick Martin has retained the original ownership leaf (showing Jack Pumpkinhead), and this is followed by a double page spread showing the original Magic of Oz endpapers from the first edition.

Dick has swapped out the usual Reilly and Lee "lamp" device on the title page with a small lion head borrowed from W. W. Denslow's Cowardly Lion entwined Oz logo from The Wonderful Wizard of Oz. After the List of Chapters, Dick has added a nice drawing of the Scarecrow and Tin Woodman from the first edition of Glinda of Oz. 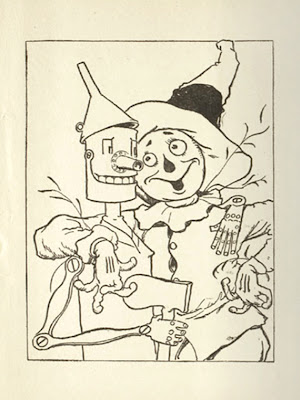 One final added detail is the little vignette of the Woozy rolling a hoop after the synopses of the Oz books at the end of the book. 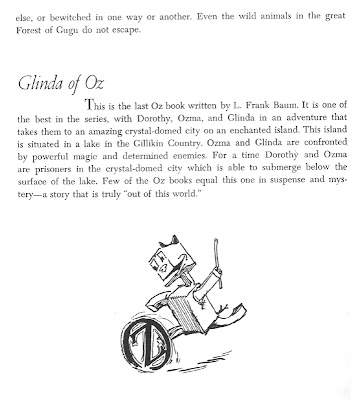 This is taken from the original endpapers of the first edition of Ruth Plumly Thompson's The Giant Horse of Oz (1928).


In addition to his fondness for Oz and Baum, Dick Martin also had a fondness for playing cards and magic tricks. So what better way to end this Magic of Oz blog than with a trick photo (from the early 1960s) showing three Dick Martins playing a magical game of cards with each other.


Also, at Oz scholar Michael Riley's suggestion, I have added another paragraph to last week's blog on The Tin Woodman of Oz to talk about the Dale Ulrey version. You can revisit that blog by clicking here.

Next week we will journey to the magical Island on Skeezer Lake with Glinda of Oz.
Posted by David Maxine at 3:00 PM

I think it's appropriate Dick added a bush to the front cover background, showing a bit more of their location.

I can tell that's Ojo next to Scarecrow and Ozma is (needless to say) sitting next to him and Tin Woodman, but that doesn't lookmlike Dorothy next to him . . . no crown. Maybe Trot or Betsy? Too . . . girly to be Button-Bright.

Ozma in the "Giant Horse" endpaper looks like she has only one leg and is leaning a bit too much on her toe, unless she's taken ballet lessons, in which she'd be a surprising fairy ballerina.

VERY INTERESTING and Fun photo of Dick Martin and his cards. I think I can see the trick . . . but I won't say (for consideration to everybody else and to avoid the chance of being wrong).

@Sam - not sure what seems to have changed re: comments. It all looks the same from my POV.

Quite dishy in his day was Dick Martin :)

These endpapers always confused me! As far as I can tell they are in order from left to right:
Fyter, Glinda, (I think I heard this is Neill's wife, I'm not sure on that), Probably Ojo (I don't think Woot wore the neck frill), Scarecrow, Dorothy, Ozma, Nick, Betsy Bobbin (I think by this time Neill had decided Betsy was blonde and Trot was brunette since that's how they were shown in Lost Princess, Rinkitink, Magic and Glinda)Wizard, Button Bright (Or Woot?, Scraps and Jack.

Anyone else have any guesses?

I like the bush and the coloring, but something seems off on how Dorothy and the Wizard look...maybe it's that Martin changed very little compared to the improvements he made with Ojo on Patchwork Girl.

It's hard to believe time hsa went by this fast! Is there really only one book left?!

You are right - the third person from the right is Neill's wife (or soon to be wife anyway) She even has an M. C. on the front of her dress which of course stands for Margaret Carroll.