The Wonderful Ouija of Oz 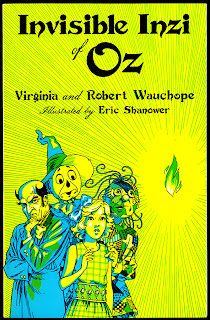 Many Oz fans are familiar with the story behind Invisible Inzi of Oz. But just in case you aren't, I'll give you a bit of background.

In 1919, sometime between May and December, a sister and brother, Virginia (age fourteen) and Robert Wauchope (age nine), began playing with their Ouija board. They were also big Oz fans. Well, the Ouija board started dictating an Oz story which Virginia dutifully wrote down  sentence by sentence. There has always been an implication that the story was "dictated" by L. Frank Baum to the children shortly after his death.

In 1923 the children's mother typed up the story from Virginia's penciled manuscript and the kids sent a copy to Baum's widow. Maud Baum responded kindly and suggested the children submit the story to the children's magazine A Child's Garden, which they did. It was accepted for publication and serialized in the magazine from February 1925 through March 1926.

In 1993 the story was reprinted as a stand-alone Oz volume, published by Buckethead Enterprises of Oz, with illustrations by Eric Shanower.

Now, I could go on and give you more about Invisible Inzi and the two Wauchope children, but perhaps you'd prefer to hear from Virginia Wauchope in her own words! Well, you can! We have just added a ten minute interview with Virginia Bass to our Emerald City Radio playlist. It will play twice a day, so in the coming week you should have no problem finding a chance to listen in.

I will fill in a couple bits of background information. Robert Wauchope, who became an archeologist, died January 20, 1979. He wrote many books. Invisible Inzi is not usually listed among them - but I guess we don't know for certain exactly who wrote Invisible Inzi.

Virginia Wauchope-Bass died on May 5, 1998. The Robert and Virginia Bass Library and Research Center at the Marion Museum in Marion, South Carolina, was named in honor of Virginia and her husband, Robert Bass.

But now, go tune in to Emerald City Radio and hear a wonderful interview with Virginia that was produced in 1994 by Brazos Arts for WAMU at Texas A & M University. The interviewer is David Frisenhahn.

It's easy to listen to Emerald City Radio on Live365. Just click here to go to Live365 and click "Sign Up" in the upper right hand corner and join for free for access to thousands of internet radio stations. Then "Log In" and make a search for Emerald City Radio. When the Emerald City Radio logo shows up in your search results, just click on the logo to start listening right away! Listening is free.
If you don't want to hear any ads, you can become a Live365 VIP listener. Just click on a VIP link on the Live365 homepage. It costs a few bucks a month to be a Live365 VIP, but as a VIP you can listen to a wider range of internet radio stations and you'll skip the advertisements.
Emerald City Radio allows a limited number of free non-VIP listeners. So in the slim chance you're kicked off the station or can't connect as a free listener, try again later when there may be fewer listeners. Or convert your account to VIP and you'll never have to leave Live365 unless you want to.
So come on and give Emerald City Radio a try. Our current playlist is over 10 1/2 hours long with such a wide variety of Oz songs and music that you're sure to hear some old friends and some new delights.

Emerald City Radio - all great, all Oz - all the time!
Posted by David Maxine at 8:37 PM

Ever since I heard that Eric Shanower illustrated this book I've been wanting it! Too bad it's so hard to find. Think Hungry Tiger Press could release a deluxe edition eventually?
If not I'll keep scouring Ebay and Amazon for a cheap copy.

I've never heard of this! Is the story any good? Although I may now have to get just for Eric's illustrations.

I'm a bit more of the opinion that the Ouija board helped the kids focus and get their story ideas out rather than supernatural intervention. And I really couldn't believe it was Baum dictating an Oz story from the beyond.

I can't really believe it was Baum dictating an Oz story from the beyond either.

But from what I know about Maud Baum, It wouldn't surprise me if she believed it.

I have considered a second printing, but I would want it to be re-set in a nicer typeface, and I would want Eric's illustrations more accurately placed. Of course, I would also need permission from Eric to use them again.