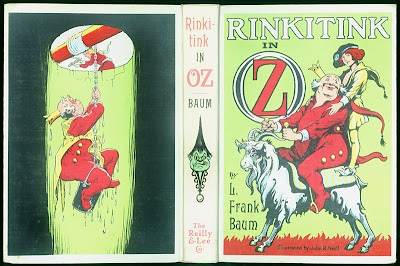 Last week we examined The Scarecrow of Oz, so this week we must set sail with Rinkitink in Oz. This was the second to the last Baum Oz book I ever read as it was one of the two "white editions" that were not published in paperback by Rand McNally. I really liked Rinkitink - even if most of the story takes place outside Oz and Dorothy has to come to the rescue. 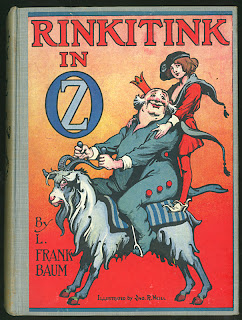 Dick Martin has produced another very engaging cover. It is based on John R. Neill's original cover label from 1916. I always found this to be an unusual Neill drawing. Somehow the inking seems much more stylized than the usual Neill work - especially the curlicues in Bilbil's coat.

The back cover is based on the first color plate from the first edition, showing Rinkitink down the well. The Mifket on the spine is taken from the evolutionary transformations scene on page 295.

Dick also greatly enlarged the "Oz" on the front cover. Perhaps he thought a bigger Oz would make the book Ozzier. 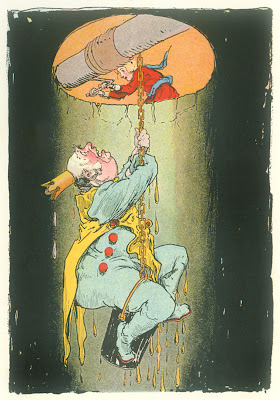 I'm finding more and more how much I think Dick improved on Neill's faces on the covers - made them friendlier and more engaged with both the reader and with each other. It's very subtle, but look how Rinkitink seems to be connecting with Inga.


While Rinkitink has the usual Road to Oz endpapers like the other "white editions," Dick was able to use fragments from the original 1916 endpapers to create two new drawings, which you'll see further down the page.


Dick has omitted the original Rinkitink ownership leaf. It's not very Ozzy. This drawing was also used in Dorothy and the Wizard in Oz from 1916 until 1964 and you may remember that Dick also used parts of this image for the new ownership leaf for the "white edition" of The Land of Oz where he deleted the children and replaced them with a picture of Glinda. 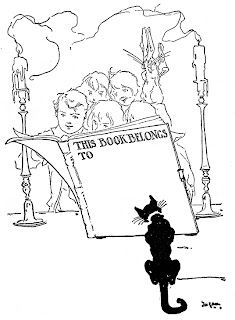 Dick made a new ownership leaf for the "white edition" by using part of the original pictorial end paper design. And he combined two of the mermaid-like creatures in the waves into a new drawing for page four (see below).

Dick Martin omitted the final drawing used in the 1916 edition - a handsome tailpiece saying THE END. But Dick was able to salvage part of it and place the main image of the ship at the end of the synopses of the Oz books at the end of the book.


One other little oddity is the dragon Dick placed on the title page. It doesn't look like Neill's work and I don't recognize it from anywhere. Perhaps Dick meant it to be Choggenmugger? Dick used a similarly peculiar little monogram for the title page of Dorothy and the Wizard - a little Brownie-like creature.

One of the most exciting things Dick added to the "white edition" of Rinktink was the Map of the Lands Surrounding Oz which had first appeared in the original edition of Tik-Tok of Oz in 1914. The map had been reprinted as giveaways a few times over the years - but this was the first time it was back in an Oz book in almost fifty years. 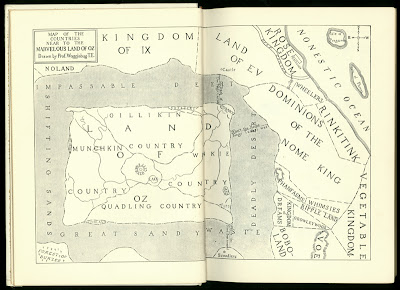 And that brings up the curious matter of the little-known "white edition" Maps of Oz. In 1968, Reilly & Lee had Dick Martin create new Oz maps as a give-away item. They are surprisingly rare considering they came out in 1968. There is a "Map of the Land of Oz," too.


It's an interesting map - quite different from the Oz Club's maps that Dick and James E. Haff had first created in 1962 -  but I'm gonna save my in-depth discussion of these until this "white edition" series is over - at which point we'll begin a new series called Map of Oz Monday where we'll cover all of the various maps of the Land of Oz.

Next week we'll go on a journey to find The Lost Princess of Oz!
Posted by David Maxine at 12:20 PM

Thanks so much for the White Edition Wednesday. "Rinkitink" is one of my favorite Oz books and you gave it a wonderful tribute.

Oh good grief, how did my name get and extra "t" in it. /facepalm.

Rinkitink was one of my least favorite Oz books as a kid, but it's among the ones I return to most as an adult. For many years I rated Oz books by how much of a role Dorothy played, and in Rinkitink, Dorothy only appeared at the end (and was rather bossily unpleasant at that). What I enjoy about it now, is that the book offers some of Baum's best characterizations, I think. Inga, Rinkitink and Bilbil each has strengths and weaknesses, but it's the combination of these talents and foibles that makes an effective group. Too bad Dorothy's late intrusion kept them from achieving their own victory.

Looking forward to your "Maps of Oz" series. Are you only examining the Reilly & Lee published maps and those 'descended' from them, (like the Oz Club ones) or are you traveling further afield with those in Greg Maguire's books, Volkov's stories etc.?

This is probably the most I've looked at "Rinkitink" since I first read the story online YEARS ago.

I never liked the cover, either.

A lot of the humans look badly sunburnt on the new "white" Map of Oz + Surrounding Countries Dick did.

@Anon - I plan for "Map of Oz" Monday to cover all of the various maps of the Land of Oz.

@Sam - Those humans on the book covers on that map are pretty freakin' tiny for you to be so concerned about their tanning ;)

You are a very wicked man. :(
I was trying to save money and I saw this and knew I had to buy a copy of Salt Sorcerer!!
I've been planning to do so for sometime, but now that you offered free shipping you left me no choice!

Thank you for that, by the way. I also would be very much obliged if you and Mr. Shanower could sign it for me. If not, I am okay with it.

As for Rinkitink, I always loved this book because even though it was obviously not written as an Oz book it showed Baum at his best when it came to the pearls and the adventure.
Cor and Gos were frightening but funny villains and I really wish there was more about Zella and Inga, they were both good characters.

It helps that it was one of my first Oz books, at least one of the first ten I read.

I agree that Martin's faces are more appealing on the cover, but I think I prefer Neill's colors (if those were indeed his color choices)

By the way, I am very excited for Map Mondays. Oz maps have always been a huge interest to me.

Thanks again for free shipping!!

@SFA - You're most welcome.

I like Rinkitink in Oz. It reads like a fine adventure story until Oz comes in. Best way to approach it is on its own terms. Full thoughts: http://newwwoz.blogspot.com/2010/06/rinkitink-in-oz.html

Plus, it gave us Prince Bobo of Boboland, who proved to be a fun character to work with when I wrote my first Oziana story. So much fun, Marcus ran away with it.

Hmmm... Maybe I should revisit Regos and Coregos sometime.

Well I do have a big computer screen and the image of the Map does enlarge when I click on it, as supposed to.

Besides, my eyes aren't too bad.