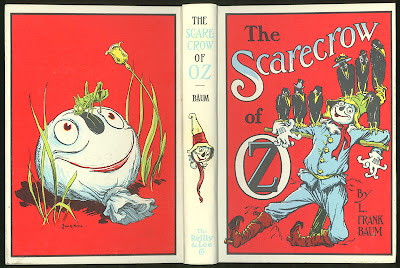 Last Wednesday we discussed Tik-Tok of Oz so today we find ourselves paying a visit to The Scarecrow of Oz. 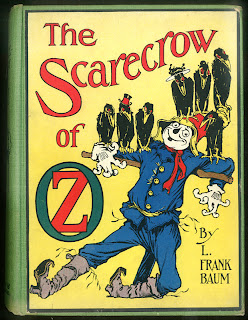 Dick Martin's cover (above) is quite handsome. The bold, solid reds are especially striking. The cover is of course based on John R. Neill's original cover design from 1915 (at left).
The front cover artwork seems to be almost exactly as Neill drew it back in 1915 - but Dick has modified the lettering somewhat - especially the funny little fillips on the two "r"s in Scarecrow.
Dick based the spine illustration on the drawing from page 212, which in turn Neill had borrowed from the cover of The Oz Toy Book (1915). The original edition of Scarecrow featured a picture of Ozma on the spine.

The back cover is based on one of the original color plates. Dick has simplified the image - and I think made an improvement by getting rid of the red outlines around Cap'n Bill's grasshopper eyes. In the original he's just kinda creepy! 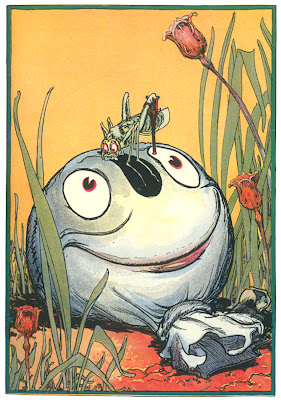 The first change to the interior was the removal of the ownership page, though Dick has reused a portion of that image for the "Famous Oz Books" ad as he has on a few other titles. Dick seems to have drawn new hands and the fence, which is inspired by the drawing for the original end-paper frieze (see below). 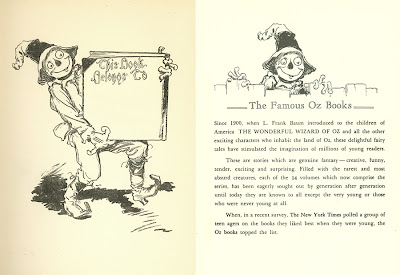 Dick has radically rearranged the fore-matter. In the original edition we get the ownership page seen above (which has a blank verso). The next page is a half-title page featuring a cute drawing of the Woozy riding the Sawhorse which is completely omitted in the "white edition." 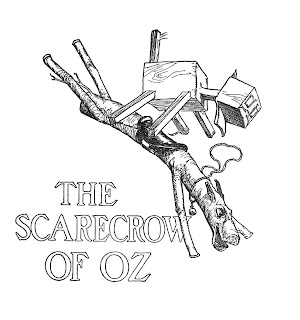 The next spread in the original edition is the frontispiece and the title-page, followed by the copyright page and dedication page. Then comes a picture of the Wizard being all windblown and the first page of Baum's "Author's Note," followed on the verso with the rest of Baum's note facing the List of Chapters.

In the "white editon" Dick has rearranged all that as follows: The "Famous Oz Books" ad listing either forty or fourteen on the verso. Page three is the dedication page. The next spread has moved the windblown Wizard to serve as a frontispiece facing the title page. Next we have the copyright page, but facing that we have the "Author's Note." The next spread features the conclusion of the "note" and the List of Chapters. Then we get a little treat! Dick has created a double page spread based on the original edition's endpapers.


Dick has modified it some. He has shrunk the image so that it isn't a bleed, he's trimmed off some of the fence at either end,  and he has cut the flower motif found at the bottom of the original.


The next spread is the same in both editions - a lovely drawing of a mermaid-like creature - possibly an unused drawing from Baum's The Sea Fairies (1911) - and then first page of text.

We end today's blog with a picture of Dick Martin around the time he was designing the "white editions."


New week we'll journey to the island of Pingaree with Rinkitink in Oz!
Posted by David Maxine at 8:00 PM

This was one of my least favorite Baum Oz books as a kid (and in many ways, still is)
Something bout it just seemed off to me.
The blonde Trot didn't help and she seemed a different character than the one in the two Trot books.
This was also the first Oz book of mine to get ruined. :(
I had just gotten the Del Rey edition and was reading it on a bank beside a stream when one of my cousins knocked it off the bank (not on purpose) and it fell into the water. :(
As a child, this was devastating since the book cost almost six dollars! And not to mention I had to have it ordered since local bookstores didn't have the Oz books in stock and my library was missing this one, Glinda, Magic and Tin Woodman.
Years later, my library did get it in and I later purchased the BoW version.
Maybe it being one of the last Baum Oz books I read had something to do with me disliking it?

Anyways, sorry for trailing off. I'm very much enjoying these W.e.dnesdays, especially the never before seen (to me at least) photos and art from the Oz club!

@SFA - I had much the same reaction to the book when I first read it. I had no idea to Trot and Cap'n Bill were at that point (having not read SEA FAIRIES or SKY ISLAND yet) so that it didn't seem all that Ozzy - and then when they got to Oz it seemed off because Jinxland was so atypical of an Oz country - the names King Krewel, etc. and the whole tone of Jinxland. And then the love interest, ugh. Freezing someone's heart seemed far too fairytale cliché to me. I've learned to like the book - generally thinking of it as the third Trot and Cap'n Bill volume.

I didn't know Del Reys ever got to be that expensive - the first years they were out they were $1.95 The over size Thompson ones were issues at $5.95 I think.

Yes, by the nineties they were between 4.95 and 6.95 (best I remember) I donated by Del Rey Baum books to some kids....who ended up never reading them sadly.

The Thompson ones were so scarce in the nineties sadly, except a hand full offered through the club.
The print on demand ones are even more exorbitant. I think I paid $19 apiece for those.

And yes, the whole Gloria/Pon thing was a big factor in my boredom with the book. I've since come to appreciate that part a bit more.
And I do love Trot and Cap'n Bill. :)

I've always had the feeling this WAS the third "Trot" book, and when Baum decided to resume the Oz series he simply changed the MS.

I think it's a near certainty ;)