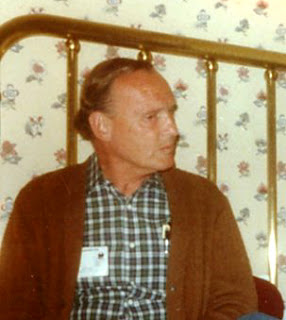 Many long-time attendees of the Winkie Convention will recall Fred Otto's Oziad. Over three decades Fred (seen at left) would transform each of the forty Oz books into rollicking verse - in rhyme! Sometimes incredibly clever, sometimes cringingly atrocious. The Oziad was a tradition at the Winkie Convention.

In 1991 Eric Shanower and I chaired our first Winkie Convention. The theme was "Oz on Stage," and Eric and I produced a very elaborate convention. The displays, the program book, and pretty much everything else was organized around the "Oz on Stage" theme and Eric and I wrote Fred Otto to ask if he'd consider doing the 1991 Oziad on one of Baum's stage shows or on Baum's stage works in general.

Alas, Fred said no. But he said no in the nicest possible way.

I don't have the books for the tales of Baum's stage works,
Those plays are to me esoteric.
Each new plan proposed an old man of my age irks.
Though it be for David and Eric.

The challenge of rhyming the name Tryxie Tryfle
Or that of the cow, Imogene,
Will please me as anything else in my life'll
But I'm not a rhyming machine!

So, with your approval, I'll do Hidden Valley.
I've read it before, so don't fret.
I did it last year at the Munchkins' gay rally,
In front of the authoress yet!

See you at Asilomar,
Fred

Fred is gone now. But he and The Oziad are still fondly remembered at the Winkie Convention.

If you'd like to join us at this year's Winkie Convention check out the WINKIE CON tab at the top of this page or click here. We'd be delighted to have you join us.

Fred Otto is one of those fabled names from my childhood, someone I read about in The Baum Bugle but never met since the only Oz convention I attended then was the Munchkins. Good to see him at last.

Any idea where I might find a copy of The Oziads?

Good question! I'm really not sure where copies reside at the moment but will check into it. There was a fairly limited edition printing of all of the OZIADS with some illustrations by Rob Roy MacVeigh published shortly after they both died.

Incidentally, both Rob Roy and Fred died of AIDS about two years apart.

I hardly ever read Facebook stuff, but I'm very glad I did today cuz of this link. It brings back some very fond memories of our dear Fred, and I was tickled by his poem. Thanks for making it available, David.