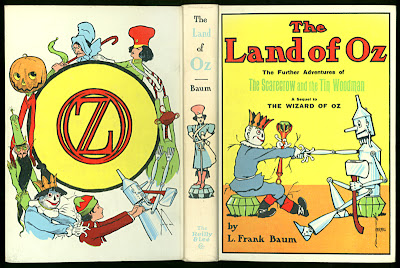 Last week we discussed the "white edition" of Wizard. Today we discuss The Land of Oz. Reilly & Lee's edition of Land from the early 1940s until the 1964 "white edition" was quite unattractive. It had a dreary cover label by a staff artist, and the book had been re-typeset. The illustrations were getting blobby and were showing a lot of plate wear. Dick Martin took the opportunity to give Land a complete overhaul in the "white edition."

For the front cover Dick Martin adapted the pictorial cover label design that had been used by Reilly & Lee from the early 1920s through the early 1940s. He used the original spine illustration of General Jinjur and rendered it in color. The back cover is extremely interesting. It is based on a very rare advertising poster for the original publication of The Marvelous Land of Oz in 1904. The only known copy was preserved in one of L. Frank Baum's personal scrapbooks which Dick Martin happened to own. 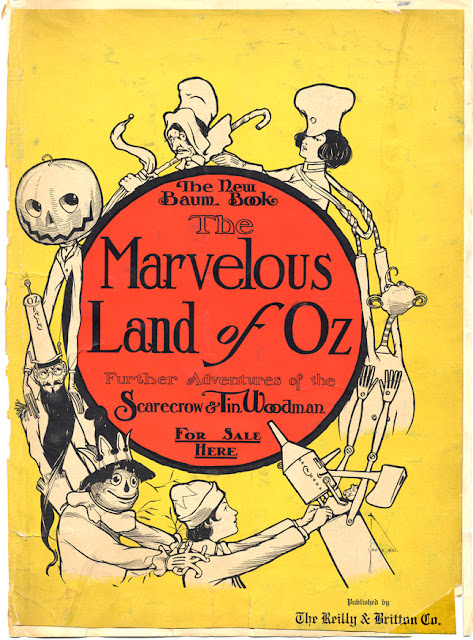 There is one major - but not very apparent - improvement for the "white edition" Land of Oz over the mediocre '40s and '50s edition that Reilly & Lee had been peddling. Dick had them reshoot the interior from a good Reilly & Britton copy, thus restoring the original typesetting and greatly improving the reproduction of the line-art illustrations.

A typical copy of The Land of Oz from the period between1935 and 1964 had the following fore-matter: blank endpapers, a generic title page, copyright page, author's note, dedication, list of chapters, small image of Scarecrow and Tin Woodman, first page of chapter one. Dick's design for the "white edition" was somewhat more generous: he gave Land (and all the subsequent "white editions") lovely pictorial black and red endpapers from the first edition of The Road to Oz.


The new fore-matter begins with a mini-essay called "The Famous Oz books," featuring the illustration also seen on page 57 of the "white edition." The next spread features a list of the Oz books and a new ownership leaf..

Dick created the new ownership leaf (above center) by borrowing the rather generic one from Rinkitink in Oz (above left). He eliminated the kids and the rabbit and traced in Glinda from the Land of Oz color plate seen above right. The next spread features the drawing of General Jinjur from the spine and a new half-title page that Dick created by using a portion of the original 1904 endpapers (below).

Dick greatly improved the title-page spread, as you can see in the comparison below. He traced one of the original color plates to create a new frontispiece and he slightly modified the original 1904 title page, removing the word "Marvelous" and the reference to Montgomery and Stone, and changing the publisher's name from Reilly & Britton to Reilly & Lee.


The next spread is the copyright page and Author's Note. Dick has restored the original 1904 typography for both.

The verso of the "white edition's" Author's Note features a line art version of the Scarecrow and Tin Woodman as pictured on the front cover. At this point Dick Martin adds one more page, a second half-title featuring the illustration from page 127 of the "white edition." On the verso of that is a picture of Tip that Dick has traced from the color plate where the main characters meet the Wogglebug. 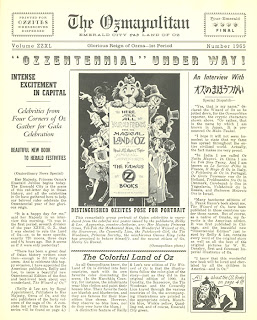 The Land of Oz  was one of the original eight "white editions" released in 1964. To publicize them, as well as the publication of the "poster edition" of Wizard, Dick Martin prepared a new issue of The Ozmapolitan, the imaginary newspaper of the Emerald City. You can download a PDF of the entire issue by clicking here.

If you look through the paper, it's pretty obvious that at this point Reilly & Lee still had plans to keep all forty Oz books in print. There are news articles in the paper about several later Oz books, including Pirates, Captain Salt, Hidden Valley, and Merry Go Round. By 1965 the decision had been made to let the non-Baum Oz titles go out of print.


BIBLIOGRAPHIC ODDITIES
This section will be modified as more information on variants comes in
I suspect that in the earliest "white edition" copies of Land the mini-essay "The Famous Oz Books" appearing on page one lists the number of Oz books at "40" in paragraph two, line three, and that the list of Oz books on the verso lists all forty titles. Please do let me know if you have a copy that does indeed list all forty books and what the number is on page one. The ads at the back of the book are the usual synopses of the fourteen Baum books. One other oddity - my copy has four blank leaves at the end after the last page of ads. Eric's copy has only one blank leaf after the ads. My copy with the multiple blank leaves also has the endpapers printed on a very heavy paper similar to a stiff card stock. I suspect my copy is a later printing of the "white edition."

Next week we'll explore Ozma of Oz!
Posted by David Maxine at 12:28 AM

It was a lot of fun reading the Ozmapolitan.
These W.E. Wednesdays give me something to look forward to in the middle of the week.

I have two copies of this book.

The copy I acquired in 1967 or so lists the number of Oz books as "40" in the second paragraph.

The second copy has removed the "40" with "each of the volumes in the series..."

But both copies have a list on the verso that has all 40 volumes.

On the last page of The Ozmapolitan you provide a link to the cover of Land is different from the white edition commonly seen. I suspect the copy of Land pictured was never produced?

Hi Scott- Thanks for the info on your copies. I should have mentioned that the covers of LAND and OZMA in The Ozmapolitan both seem to be prototypes. I suspect Dick was still working on those two titles when he was preparing the Ozmapolitan. One could easily infer that LAND and OZMA came out a little later than the others.

My copy has an inscription from Christmas 1970.

It has "40" in paragraph two of the mini-essay, and lists all 40 volumes on the next page. I do find it odd that the "40" appears to be bolded, its font doesn't quite match, and that it's not set evenly with the rest of the text in that line.

It also has only one blank page following the synopses.

The gatherings are 16 pages.

Finding this post almost 5 years later (actually, I read it ages ago with much interest, but I've only now got around to retrieving my "white editions" from my childhood home), I note with interest I have two very different printings.

The first one sounds a lot like the book owned by "Anonymous" above: 40 books in the mini-essay, 40 titles on the next page, one blank page following synopses, 16-page gatherings. The cover is also printed with Martin's preferred lighter blue, so I believe this to be a very early copy. However, I have noted two slight oddities Anonymous hasn't: on the spine, Jinjur's hat and boots are solid red, and her shirt, the emerald, the "Land," "Oz," and "Reilly & Lee" are a curious teal-green color that appears to have been created by printing the blue ink at more "strength" than the yellow.

In my second copy, it's still 16-page gatherings, with one page after the synopses, but there are also several alterations. The "Famous Oz Books" are now unnumbered, with only the Baum titles on verso. The "darker" blue is used for the cover - including, now, the "Land," "Oz," and "Reilly & Lee" on the spine. Jinjur's hat and boots are now a faint orange-red (the only "faint" color on the spine), and her shirt and emerald are a slightly greened blue that just barely registers as teal. This appears identical to the cover you show at the top of your blog post, David.

I know this is all minutiae, but I find it interesting, anyway!