In the last few months a couple friends and I have begun discussing late Reilly & Lee bibliography - mainly that the books have never been properly described or even discussed in detail. A couple weeks ago I blogged about the little-known CBI/Regnery paperbacks (the last editions of the Oz books issued by the original publisher), but today I'm going to begin an in-depth look at the Reilly & Lee "white editions." Indeed, I suspect it will be "White Edition Wednesday" for the next fourteen weeks.

If you grew up in the 1960s or '70s, chances are you discovered and first read the Baum Oz books in the "white editions." Virtually identical paperback versions of the white editions were published by Rand McNally throughout the 1970s, too.

Reilly & Lee was bought by the Henry Regnery Company in 1959, mainly to acquire the Oz books. The top-heavy series had begun falling out of print and Regnery put a lot of effort into revitalizing it. For their first Oz project they accepted a proposal from Dick Martin to repackage Baum's Queer Visitors from the Marvelous Land of Oz comic page into a picture book, The Visitors from Oz (1960). In 1961 they put out picture book abridgements of the first four Baum Oz books, illustrated by Dick Martin; the first Baum biography, To Please a Child (which featured a Martin dust jacket); and in 1963, a new Oz book. 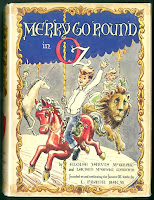 For this fortieth Oz book, Merry Go Round in Oz by Eloise Jarvis McGraw and Lauren McGraw Wagner, Dick tried a fresh new Oz book design. Instead of a plain cloth binding and dust jacket, Dick created a four-color stamping design to be printed directly on white cloth. This gave a very modern feel to the book, and Reilly & Lee decided the format would suit the rest of the Oz books very nicely. They could even eliminate the costly and easily torn dust jackets, saving money and hassle in the warehouse. Dick Martin was asked to begin redesigning the covers.

He designed new covers, often based on original color plates or endpapers which had not been in the books in decades. He searched through his collection and the Reilly & Lee files and found marvelous little bits to add to and enrich each volume. If you've never sat down to compare the white editions to the original editions, you may be in for a surprise exactly how much Dick Martin tweaked and augmented each of the titles. 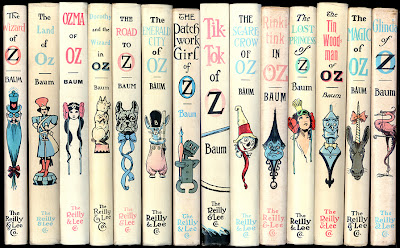 To launch the revamped Oz series Reilly & Lee pulled out all the stops. They prepared bookmarks, a new issue of "The Ozmapolitan" (an imaginary Oz newspaper used periodically as a publicity gimmick), and a marvelous poster advertising the redesign of the series. 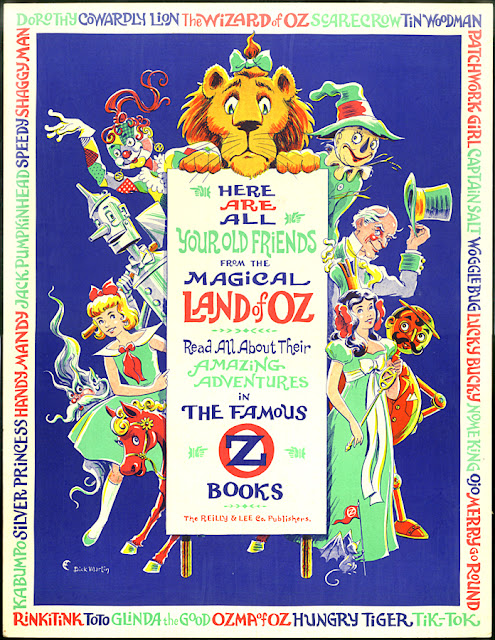 On a side note, this poster was one of the things I most wanted for my collection. I finally got one about five years ago. It is reproduced in black and white on the cover of the 1964 "Ozmapolitan." One thing the poster clearly indicates (based on the Ozzy names in the border) is that Reilly & Lee probably had plans to issue all forty books in the new format. In the end, perhaps because sales of Merry Go Round in Oz were disappointing, they decided to issue only the fourteen Baum books and allow the rest of the series to go out of print.

The new white editions began to be issued in 1964. The first batch included The Land of Oz, Ozma of Oz, Dorothy and the Wizard in Oz, The Emerald City of Oz, The Patchwork Girl of Oz, Tik-Tok of Oz, The Scarecrow of Oz, and The Lost Princess of Oz. The other six Baum titles would not be released until the following year.

We'll go into each title individually in the coming weeks, but before I close for today I thought I'd share another quirky bit of Dick Martin's sense of humor. In the early 1960s while Dick was designing the "white editions," several people were in heated research-mode trying to work out the complex bibliography of the Oz books. One topic receiving much debate concerned which ampersands dated from what years on what books. An ampersand, for those that don't know, is the character or sign standing for the word "and," as in Reilly & Lee. One of the fellows involved in the debate was James E. Haff, Baum researcher and cartographer of the Oz Club's maps. In a sly mood, and as a little joke to make Jim Haff pull his hair out, Dick Martin put a different ampersand on each title of the fourteen "white editions."

On that note, I will see you next Wednesday when we'll tackle the "white edition" of The Wizard of Oz.
Posted by David Maxine at 7:30 AM

I'm part of the "White Edition" generation of Oz fans. In the copies I read (property of a neighbor), the front matter of the books had a list of the series. All the titles had only the Baum books, but ROAD had the post-Baum titles as well. I assume that the earlier printings had the complete list, which was then truncated when the publisher decided to limit the reprintings to Baum only.

Indeed! A lot of things like that will be discussed in upcoming "White Edition Wednesdays."

I'm glad you're tackling this subject because getting a full set of white editions was one of my first goals as an Oz collector. I find them so attractive, and I'd like to know more about their history.

Can I also say that I'm exceedingly jealous of your Martin poster?

Looking forward to learning about the "easter eggs" that Dick put in these!

I am looking forward to the White cover regular slot, as I know very little about this set. As I didn't collect Oz books until the late eighties/early nighties it was Dover editions for me. Then books of wonder.

Oh Goody! I love blogs or articles that talk about/show comparisons between releases!

I didn't read the Oz books until the late eighties and early nineties but my library only had one white edition, the one of Tik Tok.
That was a very strong cover in my opinion, but seeing them all spined outward makes it seem odd that it doesn't have a character portrait like the others.

Thanks for sharing. I look forward to seeing more.

Yes, The TIK-TOK spine is atypical - though I'm really glad Dick salvaged that picture for the cover. More about it when we get to the TIK-TOK blog in about 9 weeks.

@AMWise - Thanks I really love that poster. I really like the combination of characters - it's so rare to see the Nome KIng and Patchwork Girl in advertising art much less Merry Go Round and Flitter. And I really like the names in the border decoration, too.

I bought a new copy of Emerald City from Reilly and Lee in about 1968 or so. I still have it. Its price was $3.95, and I carefully sent them three dollars and ninety five cents--in cash!

Oh that poster just got moved to the top of the "Oz things I want" list It's gorgeous and I'm a sucker for any promitional material that has Ozma on it.

I chime in with my own delight in the white editions - I would have loved to have had the hardcovers. The Rand McNally paperbacks were pretty good, though. Glad I got those rather than the Del Rey mass market size.