No doubt you are all familiar with the work of Oz illustrator Dick Martin. He was the last "official" illustrator for the Reilly and Lee Oz books and created the pictures for The Visitors from Oz (1960) and Merry Go Round in Oz (1963.) He also illustrated picture-book abridgements of the first four Oz books and he designed the ever popular "white editions" of the Oz series that dominated bookshelves in the 1960s and '70s.

Dick also played a huge part in the early days of the International Wizard of Oz Club, doing research, editing and laying out The Baum Bugle, working on bibliography, and much else including illustrating Ruth Plumly Thompson's final two Oz books, illustrating the McGraws' Forbidden Fountain of Oz (1980), and finally writing an Oz book of his own, The Ozmapolitan of Oz (1986). And at the time of his death in 1990 he had the finest Baum and Oz collection in the world.

Dick was a very private man, very reserved and quiet (he was very hard-of-hearing), and he hated fandom of any kind, despite being a fanatical Oz collector, comic collector, and toy collector himself. I am sure, too, that some of Dick Martin's reserve was because he was gay (but pretty firmly in the closet). It wasn't exactly a secret (at least to other gay people). I suspected Dick was gay the first time I got a letter from him. His tone, his quirky sense of humor, his ultra-dapper author's photo in The Oz Scrapbook (1978) all set my Gaydar off, even though I was a sixteen-year-old closeted gay boy myself.

I'll share more Dick Martin stories in the future, but in today's blog I'm gonna discuss Dick's mischievous side. Dick's illustrations were fairly cartoony, always light-hearted and fun. But he also liked to work in quaint references, little in-jokes for his friends. Sometimes these were Baum or Oz collecting references, sometimes bits of sly innuendo like in this charming illustration from Merry Go Round in Oz showing two cute little boys holding hands in the Land of Good Children. In Oz it seems everyone is a Friend of Dorothy.

Or in the illustration of Prince Gules below. Note the placement of the big Easter egg and Gules's excitement at finding that big ring. And if it's not obvious enough what's going on, Gules's right hand signals it quite blatantly. 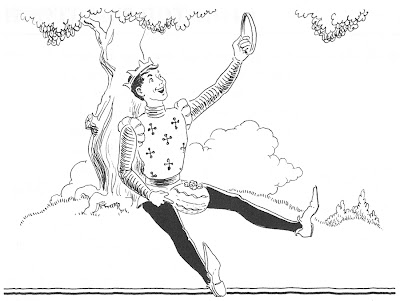 This "after dark" in Oz streak is most evident in a short bit of Oz fiction Dick wrote for friends in the mid-1960s called Oz ad Nauseum. It was later printed in a fanzine called No, no.10 (June 1972), edited by charter Oz Club member Ruth Berman, and it was included as a premium broadsheet in our own Oz-story No. 6 (2000).

But for your reading pleasure it is also available as this month's free on-line Tiger Tale. I'm sure you'll get a kick out of this very irreverent Oz tale, and you'll get to spend a few minutes with a more private Dick Martin than you get to know from only his illustrations. Go read it!
Posted by David Maxine at 2:16 PM

When I saw the title, I thought this had to do with the "Queer Dicks" of "Ojo of Oz."

Fascinating. Thanks for the insights on this amazing creator.
In researching the history of GLBT creators in comics, I immediately came across a major roadblock. Nobody was out prior to 1950. I wrestled with the ethics of reporting the "everyone knows" stuff, and quickly realized that if I couldn't prove a statement of fact, it didn't belong in an academic book.
The book is in limbo now, but I'm always fascinated with the way researchers tackle this thorny issue.

@Diana - Of course we need to remember that a lack of "proof" that a creator is gay does not mean the default is straight.

A number of Oz creators are LGBT. Jack Snow (author of MAGICAL MIMICS, SHAGGY MAN, and WHO'S WHO IN OZ was gay, Dick Martin was and Rob Roy MacVeigh was. Lauren McGraw (co-author of MERRY GO ROUND and FORBIDDEN FOUNTAIN is gay as well (though she has only come out in the last ten years or so. And then there is Eric Shanower, of course...

Many have wondered about Ruth Plumly Thompson - but there is no clear evidence other than the lack of any significant relationship of any kind.

Eric Shanower is gay shock! Right I shall have to go burn all his books now! :)

Heh, I remember when I was practically drooling (okay, so I wasn't REALLY salivating) over my hardcover of "Adventures in Oz," and my sister says to me, "He's gay."

Was it ever proven or claimed by Mr. Martin that he was gay?
I don't think gay has a definitive look or sound.
A lot of people have thought I am due to how I dress sometimes and act, and since I'm single, but I'm not.

Maybe I'm too naive but I also don't get the gayness of the egg, ring and hand gesture...lol. But I understand if you can't explain that here on the blog!! ;)

I don't think gay was as easily defined in Baum and Thompson's days as Oz authors, but I could be wrong.

I haven't read any of Mr. Martin's Oz books, but after that short story, I don't know if I want to.

As for a preference for authors based on their sexuality, I don't have one.
Eric Shanower is one of the best if not the best Oz artist and his stories are awesome too.
It doesn't matter what he does outside of Oz. :)

I considered not approving your comment because some of your queries and statements could easily come across as homophobic; but giving you the benefit of the doubt, I'll address them.

There is no "proof" that Martin was Gay; it was common knowledge. To ask for or need "proof" implies you think there's something wrong with being labeled gay. Does one need to prove they are straight?

There was nothing "gay" about the Easter egg - it was an example of Dick's mischievous streak as I stated in the blog.

I made no claims or references defining "gay" in Baum or Thompson's day. But considering that period covers 120 years (1856-1976) I don't know what you're talking about. Do you suggest homosexuality didn't exist in 1861, 1900, or 1969? Dick Martin was sexually attracted to men,not women - thus he was gay.

You seem to have missed the point that OZ AD NAUSEUM was extremely atypical of Martin's Oz work. Dick's usual version of Oz was generally a 1950s's Donna Reed/Leave it to Beaver sort of fairyland. OZ AD NAUSEUM is showing his darker, sillier, campier side, something many would define as an important part of being Gay, especially in Martin's generation where one often lived in the closet, and had both public and private personas. Dick turned 42 the day after the Stonewall riot took place and he was thus from an older generation. How he displayed his homosexuality to the public, who he shared his private life with were clearly influenced by his times.

I certainly never made a suggestion that I "preferred" authors based on their sexuality so I'm unsure what your last paragraph is referencing. If you're just stating that you're not a bigot, great!. But there is a flip-side which is that of course it matters what artists do outside of their creative lives. Michelangelo makes beautiful paintings and sculptures of naked men BECAUSE he was gay, not in spite of it.

Thanks for the Dick Martin stories - both fic and non. I got my chuckle in the martini bit from Dot's ridiculous contractions. And I wouldn't have minded Dick being more outrageous.

Last night another Oz fan linked me to the Gules and egg image. He didn't understand it.

After looking at it a bit more, I totally did. The position, what the egg is... WOW.

Thank you for answering...though I fail to see what was homophobic in my questions.
I was just curious if Dick Martin was a known homosexual or if that was something people assumed based on his art style etc.
When I said I do not think "gay" a definitive look or sound, I was not being homophobic, merely stating that I've known gays who are very masculine.

My comment about Baum and Thompson was not directed towards anything you said, I was just stating that I'm pretty sure our views of homosexuality today are different than what they were one hundred years ago.

Hmmm, well, if the other works by Martin are nothing like that short story my faith is restored in him as an Oz author for now.
Thanks for explaining.

And my stating that I had no preference for an artist/author's sexuality had nothing to do with what you said.
I'm sorry if I've offended you but there was no offense meant.

However, now I can never look at his art now without remembering that egg. :)

Do you know if the other Oz artists ever added in sly references? (Besides Polychrome's not so secret transparent clothes in Tinwoodman?)

The reason you're initial comment seemed sort of homophobic is that you ask if there is "proof" which implies saying Dick Martin was gay not a great thing or something to be kept secret. If I'd mentioned he lived in Chicago, or was white ( both of which are also true) would you have asked for "proof" that Dick lived in Chicago or for proof that Dick was caucasian? To ask for "proof" is in and of itself homophobic, IMHO.