Adolf Hitler in Oz - A Review

Today we have a guest blogger: Eric Shanower, cartoonist of Oz comics and other stuff. 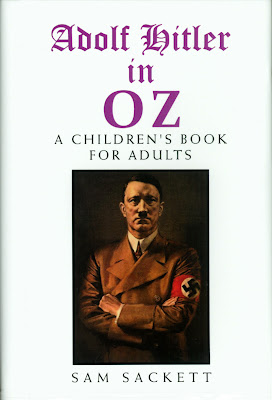 Adolf Hitler in Oz: A Children's Book for Adults
by Sam Sackett
Published by Xlibris Corporation, 2011
To order: www.Xlibris.com
A Review by Eric Shanower

Talk about high concept! You can’t get much higher than a mash up between one of the twentieth century’s most infamous monsters and America’s favorite fairyland.

If you think that the title is a joke or that author Sam Sackett won’t deliver on the premise, you would be wrong. The story - set, of course, during World War II -  begins in the final days of the war in Europe. Hitler, realizing that the end is quickly approaching, tries to hide that fact from Eva Braun while secretly commissioning construction of a time machine he believes will let him escape.

The tense atmosphere is well defined in Sackett’s clear and comfortable prose, but some of the nuts and bolts aren’t so clear. Whether the time machine can do what it’s supposed to is a question never answered. At first it seems to work, but the German Colonel that Hitler uses as a guinea pig is revealed to be lying about his experience using the machine. Later, Hitler successfully uses the machine to reach the Land of Oz, but this result is clearly not what he expected. No matter, the adventure is off to a fine start.

The first people that Hitler meets in Oz are two bumbling oafs named Stanley and Ollie, who quite convincingly reproduce the familiar screen personas of the twentieth century film stars Stan Laurel and Oliver Hardy. But when Stanley and Ollie are revealed as residents of Oogaboo I wondered why their names aren’t Jo. I expected Sackett, author of the seminal Oz essay “The Utopia of Oz” (The Georgia Review, vol. 14, p275-91. [Fall 1960]; reprinted in The Critical Heritage Series edition of The Wizard of Oz, Schocken Books, 1983), to hew closely to the Oz established by L. Frank Baum. But Sackett doesn’t.

The story proceeds to raise more questions for anyone familiar with Baum’s Oz. Why is Oogaboo located in the Gillikin County instead of the Winkie Country where Baum placed it in Tik-tok of Oz? Why has Jo Files married Queen Ann instead of Ozga, who isn’t even mentioned? I kept waiting for a big reveal of why things had changed so much in Oz between 1914 and 1945. More than halfway through the book no reveal had been revealed. The story only raised more questions by introducing more inconsistencies with the Oz books. But I’m in the camp that says that inconsistencies are part of the Oz experience, so I was content to continue reading because by that time I was heavily involved in the story of Hitler’s plan to conquer Oz.

Hitler quickly maneuvers into becoming Reichschancellor of Oogaboo. He gains allies from Runnymead, where the inhabitants run races all day long, and he sets the people of Flame City – led by the Red Hot Mama – to making rifles. Hitler’s interactions with the inhabitants of Oz are all very delightful, especially when Hitler's inhumanity bumps up against the innocent natures of the Oz residents. I don’t quite buy Sackett’s characterizations of familiar Oz characters such as Dorothy and the Wizard (no other author has ever quite matched Baum in this, either), but this is a minor quibble since the story doesn’t spend much time with them, instead focusing on Hitler and Oogaboo. And to a great extent the book strikes the right Ozzy tone of gentle humor.

At the last moment Hitler’s plans go awry. And this is where I have a major problem with the book. Hitler is foiled because he lacks knowledge of a significant detail long ago established in the Oz books. I didn’t lack knowledge of the significant detail, but Sackett fails to introduce it at the logical place in his story. As I read, I wondered why he didn’t mention it. Since so many of the other details in the book don’t match the details of Baum’s Oz books – and because this particular detail would so obviously prevent Hitler’s plan from succeeding – I assumed that Sackett had eliminated that detail from his version of Oz. My assumption was incorrect. In fact, Hitler is stopped because of that very detail and I felt cheated by the author for first playing fast and loose with the Oz “facts,” then solving a major problem with an Oz “fact” he’d left previously unmentioned. Not fair, Mr. Sackett. Was Sackett’s intention to mimic Baum’s frequent use of deus ex machina -  such as introducing previously undiscovered powers of the silver shoes, convenient use of the Magic Belt, water that wipes minds, etc.? If so, Sackett’s attempt doesn’t work. It feels like a cheat, whereas I never felt cheated by Baum.

Fortunately Hitler’s failure isn’t the end of the story. The book goes on to relate Hitler’s “incarceration” in Tollydiggle’s jail. I was quite interested to see how that situation would play out, how the Oz system would deal with such a man as Adolf Hitler. I can’t say that Sackett’s conclusion is altogether convincing, but it’s a good try in the face of formidable odds and it brings the story to a satisfying end.


Overall, I found the book an enjoyable and comfortable read. The only thing that keeps me from recommending it more strongly is that Sackett’s garbling of the established Oz mythos creates problems for the story itself. But if the title Adolf Hitler in Oz intrigues you at all, I’d say give it a try.

So what’s next? Idi Amin in Oz? Pol Pot in Oz? How about Jim Jones in Oz?—I’d be first in line to read that one.
Posted by David Maxine at 3:42 PM

Now I can say I've seen everything.

This book isn't mentioned in "the Oz Project"!

This seems pretty bizarre! I read another review of this book and it seems interesting.
Having both Hitler and Oz in the title of a book makes me have so many mixed emotions though!
Thanks for the review!

The title certainly caught my attention, but this review has me feeling that I can skip it. That is a shame, as I was rather looking forward to seeing a nice new Oz story that actually fit in with the canon.