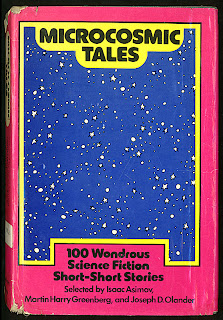 Many of you know that Rachel R. Cosgrove, author of Hidden Valley of Oz (1951) and The Wicked Witch of Oz (1993), wrote romance novels as well, usually under her married name Rachel Cosgrove Payes. It's less well known that she also wrote science fiction, sometimes under her own name, and sometimes under her pseudonym, E. L. Arch (an anagram of Rachel). In today's blog I discuss an unusual SF short story included in the anthology Microcosmic Tales - 100 Wondrous Science Fiction Short-Short Stories, published by Taplinger Publishing Co. in 1980 and selected by Isaac Asimov, Martin Harry Greenberg, and Joseph D. Olander.

Rachel's contribution is called "Mattie Harris, Galactic Spy," first published in Vertex, April 1974. The story tells the tale of a voluptuous young woman named Matilda Harris (some word play on Mata Hari) who, as the title states, is an Intergalactic spy "with a emphasis on the gal." Matilda must prevent an assassination. Her suspects include a hot-blooded folk singer from Betelgeuse IV and an unsavory attaché - an arthropod named Ontha Lefnik - who is from an unfriendly planet in the Caroline series. In the end it's a very (deliberately) silly story.

Among the other ninety-nine tales are several written by people with strong Oz connections: two by Harlan Ellison (big Oz fan), one by Robert Payes (Rachel's son), one by Oz club charter member Ruth Berman, one by Philip José Farmer (author of Barnstormer in Oz), and a story by Lester Del Rey (part of the Del Rey publishing line responsible for the mass-market Baum Oz books and a dozen or so trade-paperback Thompson Oz books). The volume also includes stories by such icons as Isaac Asimov,  Arthur C. Clarke, Robert Silverberg, Larry Niven, William F. Nolan, and many others.
Posted by David Maxine at 11:14 AM

Speaking of her books, does anyone still sell Wicked Witch of Oz new? The prices on Amazon are outrageous!

Also, I had an unrelated question: has Eric Shanower ever illustrated a picture of Betsy Bobbin? I seem to recall a cover of Oziana having her on it, but I was wondering what color he has done her hair to keep it from clashing with Dot and Trot's?

@ saintfighteraqua
a) I got my copy of "Wicked Witch" from . . . Hungry Tiger Press!

b) Yes, Eric has drawn Betsy Bobbin, notably in "Wicked Witch". While all that book's images are black-and-white, he did mention (and show) in his Deluxe Hardcover edition of "Adventures in Oz" that he did two limited edition colour plates - one of which shows Betsy with blonde hair that is slightly more orange (and straighter/less-curled) than Dorothy's. Plus she's taller and a bit more grown.

With Shanower, you can NEVER get Dorothy, Betsy or Trot mixed up!

Thanks so much Sam! I checked though and Hungry Tiger seems to be sold out or no longer carrying Wicked Witch.

Also, I really appreciate you telling me about Shanower's Betsy.
I am really glad to hear he also draws her as a blonde!

Sorry we only carried WICKED WITCH for a year or so. @ I agree Sam, It's always east to tell the three girls apart when Eric draws them.

Ah, that's too bad. But I understand.
Thanks for the info you guys!