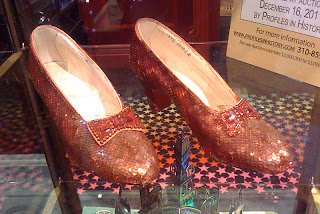 Last Tuesday I set out on an unexpected journey to Los Angeles to see the Ruby Slippers for the first time. This wasn't just any pair of Ruby Slippers - these were the "Witch's Shoes," the best preserved pair, the pair used in close-ups, the pair worn by the dead Wicked Witch of the East, and the pair worn by Dorothy when she clicks her heels three times to go home.

I arrived at the Solange Azagury-Partidge jewelry gallery on Rodeo Drive. I spotted the slippers in a four-sided glass case at the back of the small gallery and approached them, these magical icons of Hollywood and Oz, and, well, they were just shoes.

I sensed no magic, my heart didn't race, they were just shoes. I felt an Ozzy exhilaration when I met Margaret Hamilton. I felt excited the first time I got to see the rotting remains of a flying monkey miniature from the film. But why nothing special for the shoes? Maybe I'm just not into feet. Or perhaps the idea of the Ruby Slippers is just so magical that the real thing can't help but disappoint with the loose sequins, the splitting seams, scratches on the orange paint on the bottoms. These aren't magical shoes - they didn't go to Oz. They're a half pound of leather, cloth, and cardboard, a pocket full of glass geegaws, and they're gonna sell for over two million dollars in a few weeks. 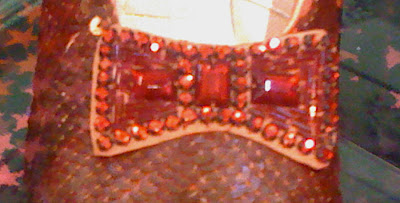 They also looked really old and not nearly as pristine as legend would report. I wondered if there was a protective layer of cloth or plastic over the sequins, as they looked so faded and gray. There wasn't. But they sure looked like they needed a good dusting! 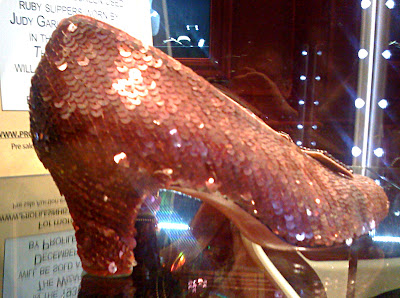 Interestingly, the shoes have come out much redder in my photographs than they looked in person. And, of course, they were designed to be photographed, not to be studied with a magnifying glass. Who am I to complain of sloppy sequin work on the heels when the shoes were never meant to be seen up close from the back? And when I got home and looked at my photographs, I started to feel some rush of magic - the shoes sparkle and the color deepens, they start to work their enchantment.

I really had a wonderful time and I can think of no better way to see the slippers. The gallery set up a very attractive display so the shoes could be viewed from any angle. The store was empty the entire time I was there, so I could look and study and take pictures to my heart's content. The store itself with its bright red interior, carpeted in a rainbow of stars, couldn't have provided a more lovely setting. 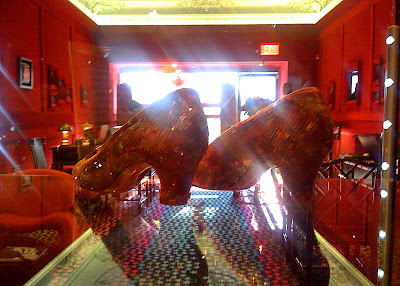 When the staff saw how interested I was they started talking to me. They couldn't believe I'd driven up from San Diego only to see the shoes. The publicist came out and talked with me for a while. They brought me a Coke and a chilled glass, and we chatted a bit more. The gallery even took a few additional photos for me with their good digital camera (mine in this blog were taken with my iPhone). As I was leaving, the store offered me a few parting gifts - a handsome hardcover gallery catalog and a 2012 Solange datebook.

It was a magical afternoon! 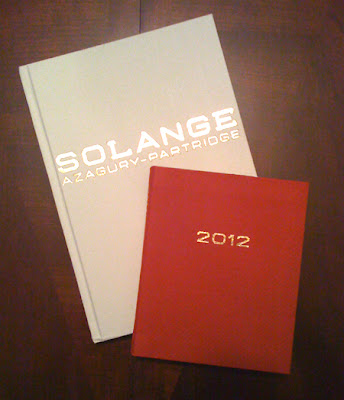 They do look rather mundane. But still, I guess they are important for MGM fans! I suppose there are few things from the 30's that look good these days.

Were the Silver Shoes also preserved? The ones Judy Garland wore with the pointy toes?
I've never heard and assume they were tossed out as soon as they decided on Ruby Slippers.

Judy's pointy-toes shoes (based on Denslow's silver shoes of course) do survive but they were also ruby-colored. They just sold at auction a couple months ago for a hefty sum.

I agree with most of what you say, David.

About how the Ruby Slippers look different, less glamorous and more plain than detailed, in person and on retrospect or full display than for fleeting seconds on film/video.

Good that you got a little sense of magic afterwards, but yeah it does seem a bit disappointing and like " . . . That's it?" on a look like this.