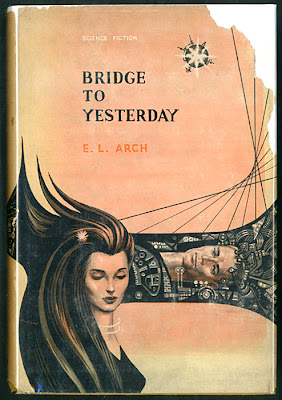 If you've been eating your Magic Muffins and using your memory you probably know that E. L. Arch is in fact Rachel R. Cosgrove, author of The Hidden Valley of Oz (1951). E. L. Arch is an anagram of "Rachel."

Rachel wrote quite a bit of SF in the early 1960s under this pseudonym and a fair amount of short SF under her own married name, Rachel Cosgrove Payes, throughout the 1970s and '80s.

A few passages in Bridge to Yesterday really jumped out at me. Early in the book the two main characters go to Jupiter's moon, Ganymede, in search of a man working on a cure for cancer. Ganymede is covered by a dense jungle. One of the characters quickly discovers that he is literally taking root in the Ganymede soil - the scene is clearly inspired by Rachel's memories of the Magic Isle in The Magic of Oz when Trot and Cap'n Bill start to take root. With no "magic" to rescue the hero the only solution is the one Trot and Cap'n Bill were so fearful of - he has to be pulled out by brute force, tearing the roots from his feet. What's particularly resonant if one knows much about Rachel's life is the fact that someone was on Ganymede looking for a cure for cancer. A few years before she wrote this book Rachel had a serious battle with cancer herself - she survived by undergoing a very early form of chemotherapy. The chemo saved her life, but did serious damage to an ankle and foot.

Later in the book the two main characters must go undercover in a prison. To my mind, the prison seems vaguely reminiscent of Tollydiggle's prison in the Emerald City. It's presented as a rehabilitation resort and treatment is referred to in the slang as "the rest cure." There are no fences or bars, and each prisoner wears a special robe and is assigned his own special guard called the "friend."  But the "rest cure" is presented as a form of torture in many ways. One is supposed to just rest and think about the crime one has committed. The prisoner is to do nothing but relax and meditate - period! The "friend" takes the prisoner out for a walk on the grounds every afternoon - but the prisoner is on a stretcher, lying prone, wheeled around by his "friend."  Even meals are spoon fed by the "friend." While on one level this seems like a parody of Tollydiggle's Oz prison - it also must surely be a satire on Rachel's long weeks in the hospital while she battled cancer. She no doubt hated her own "rest cure" with a passion.

There's another curious bit. Several times Rachel uses the phrase "shrinking violet."  This must be a phrase she liked, as "shrinking violets" became a plot device in one of her final Oz short stories, "Percy and the Shrinking Violet," published in Oz-story No. 1.

The germ of the story was interesting, and it was an easy read, yet I couldn't help feeling frustrated that I was several steps ahead of the characters a lot of the time - especially for the last third of the novel.

A strong editor could have helped Rachel turn this story into a much better and tighter book with little effort. Alas, I suspect there was no editor and I know Rachel was paid a flat fee of only $300 to write it. Despite the fact that the book was probably written very hastily, I felt I could see Rachel enjoying herself: sometimes engaging in word play, writing a few subtle jokes, perhaps showing off some of her background as a biologist in describing the medical laboratory and the effects of the cryogenic process on the human body.

Rachel must have enjoyed SF to some extent. I don't know for certain, but I suspect she attended several World Science Fiction Cons. She told me once that she felt very dismissed as a Science Fiction author. But she added, with a chuckle, the only time she was ever treated with respect - and a little deference - in SF circles was when her SF writing colleagues learned that she had written an Oz book.

You can read a blog review of E. L. Arch's The Deathstones by clicking here.
Posted by David Maxine at 1:34 PM

It's very interesting to find out that Oz influenced her other works.

One of my favorite non-Oz books by an Oz author was The Moor Child by Eloise Jarvis McGraw.