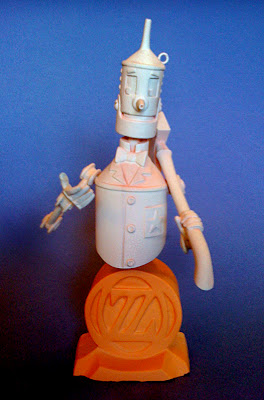 A number of years ago a nice company considered issuing collectible resin statuettes of Eric Shanower's versions of the Oz characters. A splendid idea, IMHO!

They were going to begin with the Scarecrow and Tin Woodman, the company got as far as having sculpts made, and even ran off a few plaster casts for exhibiting at trade shows and toy conventions. Then the project was abandoned.

The sculpts were great! They really did capture the essence of Eric Shanower's versions of the two characters. There was some debate over whether the finished statuettes should look like stone or be fully painted - the base was to be emerald green as I recall.

The next two characters were going to be Dorothy and the Cowardly Lion, and then the set might start to branch out with Princesss Ozma, Tik-Tok, Jack Pumpkinhead and the Patchwork Girl, etc. 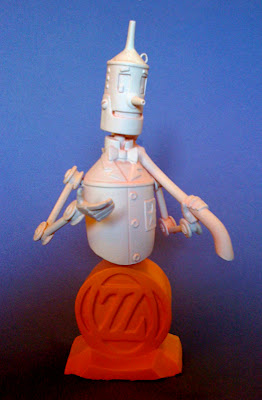 Personally, my opinion was that starting with the main four characters was partially what killed the project. The point in licensing Eric Shanower's versions was to do sculpts of Baum's Oz, not the movie-loving general public's Oz. It seemed like the company loved the idea of presenting the "real" Oz characters - but then they tried to market them to the general public who mainly knew the film. The Scarecrow and Tin Woodman might have worked ok for that, but the next two scheduled were going to be a tough sell. The Cowardly Lion would just be a lion with a bow, and Dorothy a non-descript girl with short blonde hair.

I suggested they focus on the fantasy/sci-fi and comics market instead of the gift-shop trade they were looking at. I also suggested they might start with Princess Ozma in the first release - to clearly show where the series was going. But the project was abandoned and that's that.

But they do look great sitting on a book shelf!

It's too bad that these were never produced. I would have bought them. The tin woodman looks great!

No fair I want him! He's very detailed :)