Today's blog features a fascinating interview with L. Frank Baum from an unidentified San Francisco newspaper in 1913. The original article contains a number of errors. Baum refers to Maxfield Parrish illustrating Father Goose when in fact Parrish illustrated Baum's Mother Goose in Prose. The producer of the 1903 Wizard of Oz musical should be Fred Hamlin, not Frank Hamlin. Baum's colorful exaggerations have been left to stand on their own. Enjoy! 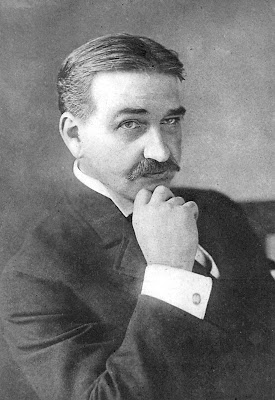 L. Frank Baum, the man who invented the word “Oz” and all the lovely images that go with it, didn't seem at all worried at noon today over the fact that his brand new musical extravaganza, The Tik-Tok Man of Oz, was to have its first performance tonight.

Baum sat in the office of the Cort Theater and gossiped about fairyland.

“I’ve written twenty-six books of fairy tales now,” he said, "and I suppose I'll write Oz stories until I die. The children won't let me write anything else; I tried another sort of fairyland once, but I got thousands of letters from children who said they wanted Oz and lots of it and nothing else."

Baum is entirely disrespectful toward the old style fairyland.

"I invented a fairyland that was a new sort of fairyland," said this modernized Hans Andersen. "The old-time winged fairies are all right, you know, but they're just a little beyond the children.

“I brought to life a whole lot of people that I hadn't any business to bring to life; but the children understood them. They could get on good terms with the clockwork man that wound up with a key; and the result is that, besides being about the only fairy tale writer in America today, I have sold more books than any other living writer. I am very close to the four million mark."

Baum's white vest, tall figure and good tailoring don't serve at all to smother the dry personality which he learned many years ago in Aberdeen, South Dakota. You can see the fairy tale writer in the extraordinarily mild pair of blue eyes which look straight at the person addressed.


THOSE FOUR "TADS.”
“Twenty years ago I was running a weekly paper in Aberdeen." said he. "I used to go out and rustle up my own ads and set 'em up, and when the tramp printer would desert me I would take a fling at the type case, and then I would go out and deliver the papers to my advertisers on a Saturday afternoon so I could collect enough money for a ham sandwich and a cup of coffee.

"And I had four little 'tads' and a big fireplace. We all used to lie on the floor around that fireplace, and I’d tell the 'tads' stories.

"One night my wife, who was sitting near sewing, said: 'Why don't you write some of those stories down? You might make some extra money by sending them to children’s papers.’ And extra money looked awfully large just then. "I wrote a book and sent it to a Boston publisher. A long time afterward I got a letter: 'My dear sir: After long consideration we have decided that we cannot bring out your book. You treat fairyland in too familiar a manner.’

“I let the book lie for a full year before I got over that. Then I picked it up and sent it to the Century Company. I hadn't any business to send anything there, but I did. Three days later I received a telegram: 'Book accepted.’ It sold like wildfire—selling yet."


OLD KING COLE.
The first book Maxfield Parrish ever illustrated was my Father Goose which I wrote next. You know that famous picture of 'Old King Cole’ of Parrish's? That was taken from my Father Goose and this was the book where he first showed those spires and distant castles which are characteristic of his work.

Ten years ago I was persuaded by Frank Hamlin to turn some of my stories into a play, and I wrote The Wizard of Oz, a musical extravaganza. This play isn't anything like the one I'm giving tonight, except that both are musical extravaganzas based on the Baum books. I wrote this last one at the request of Oliver Morosco. Now you know how much of a dramatist I am.

“I write one book a year: at times I have done a little more, but I find it is just that much more brain fag, and one a year just fits children's birthdays and Christmas presents. And one or two of my very best books are tucked away unpublished in safe deposit vaults, so as to give my family something to go on when I die. The children will take care of them."
Posted by David Maxine at 1:24 PM

Wow - it helps to explain the inconsistancies in the Oz books, when Baum can't keep his own history straight! : )