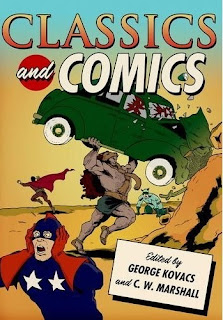 Here's a heads up to all of our Age of Bronze and Eric Shanower fans! Oxford University Press has just released Classics and Comics, a critical study of the way the comics medium has dealt with classical texts and mythologies. Of special interest to our readers is a 12 page comics-essay written and drawn by Eric Shanower.

"Since at least 1939, when daily-strip caveman Alley Oop time-traveled to the Trojan War, comics have been drawing on material from Greek and Roman myth, literature and history. At times the connection is cosmetic - as perhaps with Wonder Woman's Amazonian heritage - and at times it is almost irrelevant - as with Hercules' starfaring adventures in the 1982 Marvel miniseries. But all of these make implicit or explicit claims about the place of classics in modern literary culture.

"Classics and Comics is the first book to explore the engagement of classics with the epitome of modern popular literature, the comic book. The volume collects sixteen articles, all specially commissioned for this volume, that look at how classical content is deployed in comics and reconfigured for a modern audience. It opens with a detailed historical introduction surveying the role of classical material in comics since the 1930s. Subsequent chapters cover a broad range of topics, including the incorporation of modern theories of myth into the creation and interpretation of comic books, the appropriation of characters from classical literature and myth, and the reconfiguration of motif into a modern literary medium. Among the well-known comics considered in the collection are Frank Miller's 300 and Sin City, DC Comics' Wonder Woman, Jack Kirby's The Eternals, Neil Gaiman's Sandman, and examples of Japanese manga. The volume also includes an original 12-page "comics-essay," drawn and written by Eisner Award-winning Eric Shanower, creator of the graphic novel series Age of Bronze."

Below you can see a sample page from Eric's comics-essay. It's really great! As you can see, it's a sort of drawn-documentary on the creation of Age of Bronze and it's narrated by a cartoon version of Eric Shanower himself!  I highly recommend the book - please note that it is available in both hardcover and paperback. The hardcover is ridiculously expensive! The paperback on Amazon is a bargain! 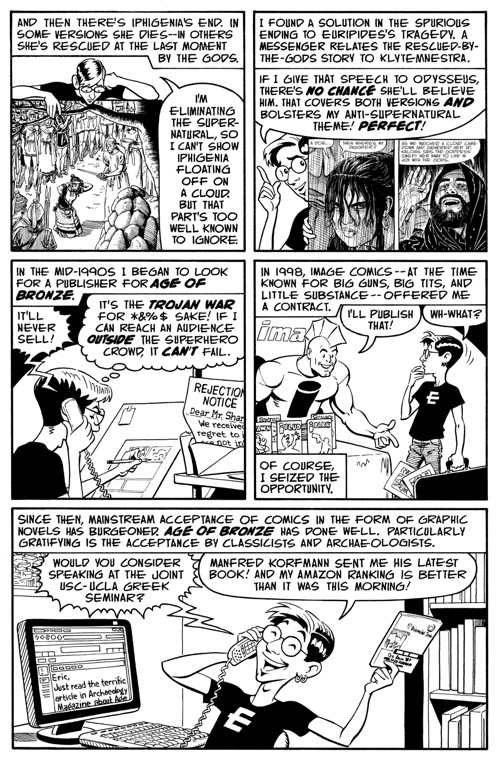 In the words of the internets: this is relevant to my interests.


The ineteresitng thng about Age of Bronze is while it's abundantly clear from his author notes that Eric wants to leave the supernatural elements out via death of the author when I first read it before reading said notes I just thought it was meant to be more sublte.

Storms still appeared when people prayed for them, sacrifices made to the gods cause the winds to return...

When I read volume 2 I thought Iphignia's fate was meant to be ambiguous and that Klytemnestra's disbelief in Odysseus story was meant to provide her grounds for her actions during the Myceanaen saga's continuation after the Trojan War ends.

In fact having read volume 2 first I was suprised when I picked up volume 1 and see that Cheiron wasn't an actual Centaur... there had been nothing which made me say, "hey the gods aren't in this story" until I read Eric's notes.

And when I read it I still see the gods in the background, even knowing what Eric intends... just because thats how my mind works.

If you want to see the gods working behind the scenes in Age of Bronze, that's perfectly okay. After all, throughout history and still today, plenty of people without any evidence have believed they've seen gods at work. It's natural to assume that coincidence and natural occurrences are the gods in action in a story that traditionally includes gods interacting with humans. It's not what I, as the author, intend. But I'd be pretty foolish if I thought I could control readers' reactions.

Using yourself as a character? I don't know.