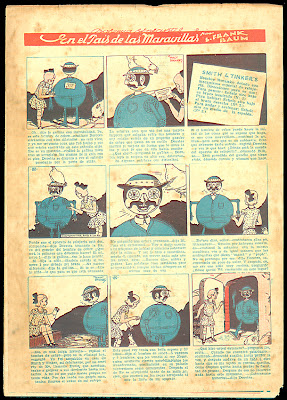 This of course is The Wonderland of Oz, the comic strip by Walt Spouse, which adapted Baum's Land of Oz, Ozma of Oz, Emerald City of Oz, Patchwork Girl of Oz, and Tik-Tok of Oz in the early 1930s.

Shown at right is a sample of the rare Spanish version of Wonderland published in Cuba in 1932. The Cubans printed it with minimal color. In the US, the strip was black and white and ran in daily newspapers, four panels per strip.

Spouse also didn't use word balloons, instead printing large blocks of text below each panel. As always, you can click on any image to enlarge it.

Hungry Tiger Press has been restoring this long-lost comic strip and we currently have three volumes available: The Land of Oz, Ozma of Oz, and The Emerald City of Oz. Click on any of the titles to take a look! 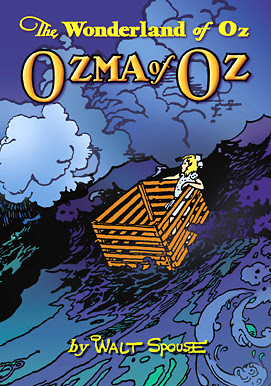 This week only, we are offering all three Wonderland of Oz titles at 20% off! It's a great chance to discover the very first comics adaptation of the Oz books!

And for our Hungry Tiger Press reissue, Eric Shanower has prepared a new script - based on Baum's original text - that uses traditional word balloons.

Both Land and Ozma also include short appendices featuring samples of the strip as it originally ran in the newspapers and also as it appeared in its collection in the strip-reprint book The Funnies. I'll give you a few more cool peeks into the Wonderland of Oz later in the week!


Click here to visit our on-line store!
Posted by David Maxine at 8:13 PM