One of the favorite books I've published is Edward Einhorn's The Living House of Oz. It's a very traditional Oz book in its way: it prominently features traditional Oz characters like Ozma and Glinda, we visit a small kingdom existing around a single theme, and both the adventure and whimsy quotients are high. But it is unusual in certain ways, too.

The main character is Buddy, a thirteen year old boy. Unlike most Oz book protagonists, Buddy is not from America and is not an orphan. He lives with his mother in a typical Oz house - typical in every way except that the house - and everything in it - is alive. But Buddy behaves like a real kid, with some growing pains and a family that's not perfect. One of the main themes of the story is a debate over whether Ozma's rule forbidding anyone except herself, the Wizard, and Glinda from practicing magic is fair. If you lived in Oz and could work magic, would you like to be forbidden from practicing your craft?

In the course of the book we revisit several Baumian places and peoples. This is one of the things I like best about the book. It adds a verisimilitude to the Ozian universe. In many Oz books - especially Thompson's- once we've visited an odd little town or village, we know we'll never hear of it again. It might as well have vanished once the adventurers have continued on their way. In Living House we encounter the former Flatheads, Reera the Red, the three Adepts, the Phanfasms, Tollydiggle the Jailor, and much more. We meet them again not just as Baum last showed them to us, but with a full recognition that life has continued on with these people in the last eighty or so years. Einhorn presents them as real people in a real Oz.

There are some serious issues discussed in the book, moral and social responsibility, good versus evil, ugly versus beautiful. But none of this is slathered on with a trowel. It's all perfectly balanced by the pervasive humor and exciting action. The Living House of Oz is still a book for kids - and kids at heart.

Eric Shanower provides beautiful illustrations. One of my favorite is the full-color endpaper design (below) showing all the inhabitants of the Living House whooping it up!

So come on, if you've never read it, give the book a try! To help things along in these tough times The Living House of Oz is being offered at 25% off the cover price for the next week.Also, illustrator Eric Shanower will be happy to autograph any copy sold this week. You can request such in the "Special Instructions" field during check out.

Take me to The Living House of Oz! 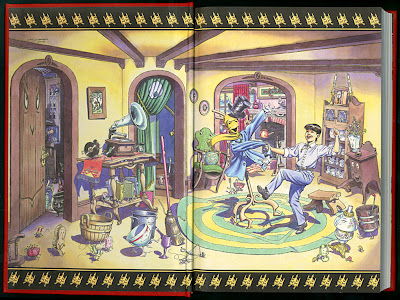 That book sounds right up my alley, in some ways it's similar to what I'm trying to do with "The Ozma Confessions" (if someone can help me come up with an "of Oz" title instead of Ozma Confessions I'd be greatful), with looking at the magic ban (as well as other issues surrounding Ozma)...

I will deffinitly check this one out, thanks.