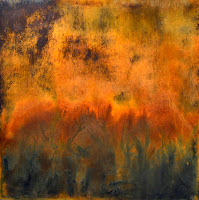 A few weeks ago I posted about meeting Fairuza Balk at a screening of Return to Oz in Santa Monica.

That got me into a Fairuza mood and I immediately ordered her new Limited Edition CD single, Stormwinds, by her group Armed Love Militia. My CD just arrived! The four and a half minute song was written by Fairuza, and she provides the vocals and plays guitar on it as well.

The single is very enjoyable, well produced, and Fairuza sounds great. One can imagine the title Stormwinds might refer to Dorothy's Kansas tornado but there is nothing in the lyrics to indicate such. 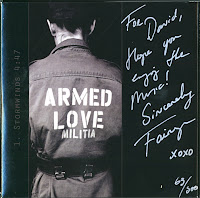 The album's cover art (above) is from a painting by Fairuza in her "Rust" series. The CD came with a signed print of the painting as well. The CD single was limited to only 500 copies and is nearly sold-out at this point.

So, congratulations, Fairuza on a great CD debut!
Posted by David Maxine at 7:42 PM