Return to Oz on the Silver Screen 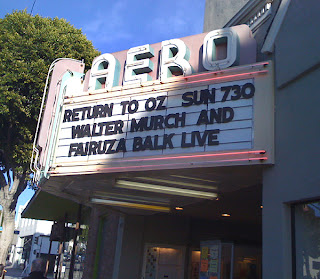 This last Sunday, November 28, 2010, Eric Shanower and I had a marvelously Ozzy day!

First we made a visit to L. Frank Baum's grave in Forest Lawn. This was the first time we had been there. It was really nice and I'll talk a bit about that in a blog later this week.

The reason for our day out was to attend an Ozzy double feature. Both the 1939 MGM Wizard of Oz and the 1985 Disney Return to Oz were being shown at the Aero Theatre in Santa Monica. And if that wasn't draw enough, Return to Oz Director Walter Murch was scheduled to be on hand for a Q&A session after the screenings. However, Sunday morning it was announced that the star of the film, Fairuza Balk, would also be appearing!

It was very interesting to see the two films back-to-back. And I liked Return to Oz better than I ever have before, too. Maybe I'm just so aware of its few shortcomings that I'm just not as bugged by them anymore. It was a great day, a great evening, and several other Ozzy friends joined us for the fun.

Of course Eric and I dug a few things out to be signed by Fairuza and Mr. Murch.


I was happy to find the photo (above) among my Return to Oz images. It shows Murch directing Fairuza on set during the shooting of the film - so it seemed perfect! As you can see they both signed it! Hah!

In the Q&A Murch showed a surprisingly thorough knowledge of Baum's life and career. He also told of reading The Tin Woodman of Oz when he was a kid and how strongly he was affected by the scene where the Tin Woodman has a conversation with his old "meat" head.

Fairuza told of her audition process for the film, and of reading the Oz books as a kid, too, and most interestingly told of a dream she had just before shooting on the film began, where Judy Garland was scolding her and demanding the return of her shoes! Fairuza also told of a day she'd been tired and frustrated and ran away from the set. She went and hid on the back lot at Elstree Studios. She was very generous with her fans afterward, too.

It was a great evening.
Posted by David Maxine at 9:59 AM

Sounds like a fun event. Remembering how tough it was to make that movie, and how it was received, it's pretty amazing that there are happy retrospectives like this.

Thanks for sharing. I am have been on of the biggest fans of Fairuza since I was about five and saw Return to Oz on VHS in the 1980s. I wanted to thank you for sharing this story. I met her and thought she was one of the kindest people I've ever met. Glad you had a great experience, and thanks for sharing those fascinating Oz stores. Great blog, too.

@Robin - Thanks for the kind words. She was really great!

What were some of the questions people asked?

Well, after Murch talked about all the bad reviews they got when people compared the film unfavorably to the MGM movie; I asked him if he'd had any second thoughts on creating the Kansas/Oz parallels and using the Ruby Slippers in RTO.

To me the Ruby Slippers just SCREAM "Please compare this film to Judy Garland's classic.

Murch didn't seem to really get my point - he said they were gonna compare it to Judy Garland anyway and he didn't think the slippers had anything to do with it.

Eric and I both wanted to ask why hew had Ozma send Dorothy home to Kansas face down in the mud - but we didn't get the chance. I chalk it up to either Murch viewed Dorothy's journey as a dream; or else Ozma has REALLY bad aim.

Yeah, I thought Ozma splashing Dot down in the mud was pretty rude. Unless, of course, it was all a dream. In which case did the girl/Ozma, who escaped with Dorothy in the rain, drown in the river, or not exist? After the electroshock Tik-Tok the drowned blond is the movie's second most memorable creepy touch.

Don't forget the Ozma+Billina cameo in Dorothy's new bedroom MIRROR at the end of the movie. To me this proves this was not a dream.

Oh how I WISH I could have been there to see the movie on the big screen and the 2 important people of this film!

Thanks for the post. I agree that using the Ruby Slippers was a mistake--as was the title, "Return to Oz" as they were just asking for comparisons with the 1939 movie.

If Dorothy's visit to Oz was supposed to be understood as a dream--thus answering the question of why Dorothy wakes up in the mud rather than safely at home--then Ozma and Billina appearing in Dorothy's mirror in Kansas clearly tells the audience that Dorothy is hallucinating. That Dorothy hallucinates Ozma telling Dorothy not to mention the hallucination to Aunt Em shows admirable self-preservation on Dorothy's part--considering that Aunt Em had agreed to electro-shock therapy (though she couldn't know the ramifications)--but does indicate that Dorothy does need the mental help that Aunt Em is so anxious to provide her niece.

This view of the film I find disturbing, so I prefer to not see it as a dream. But I still want to know why Ozma plops Dorothy onto a muddy riverbank, dirty and dazed.

I saw the movie again last spring (actually I've sat through it several times this year of its 35th anniversary), and I finally came up with the most logical answer as to why Ozma plops Dorothy facedown on that muddy riverbank, dirty, disheveled, and dazed. My full answer is printed in the OzCon International 2015 Souvenir Book, but the short answer is that Ozma didn't want Aunt Em and Uncle Henry asking awkward questions. Ozma wants to preserve Dorothy from any other misguided "cures."