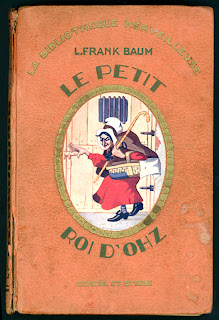 I have been collecting foreign translations of the Oz books since I was about fifteen.

I recently found one I have wanted for a very long time - the 1933 Le Petit Roi d'Ohz - a French translation of L. Frank Baum's Marvelous Land of Oz. In fact this is the second earliest translation of any Baum or Oz book, preceded only by the 1932 companion translation of The Wizard of Oz called Le Magicien d'Ohz.

The book was published by Les Éditions Denoël et Steele in Paris. The translation is by Marcelle Gauwin. The French title translates as The Little King of Oz. The titular character is in fact the Scarecrow - the "little king" who is deposed by Jinjur.

This is a full translation of Baum's text, and the book contains many of John R. Neill's original illustrations. But the translator has made a number of subtle changes. 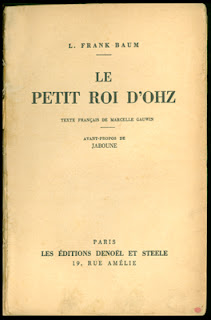 Tip becomes Cadet and he lives with an old witch named Malencontre (also a French noun meaning bad luck or misfortune). Cadet builds a creature to frighten her which he names Thomas Lampion (Jack Pumpkinhead). The Sawhorse is aptly named the Cheval de Bois. Jellia Jamb becomes Bergamotte. General Jinjur becomes General Fine Aiguille, named for a fine needle. The Wogglebug becomes Baron Puceron, H. D. M. A puceron is essentially an aphid or plant louse. They all escape in the Cerf-Volant (the Gump) and travel to Glinda who is named Argine. All ends happily when Princesse Papi (Ozma) is restored to the throne.

There are at least a few subtle changes in the story, too. Instead of Mombi turning into a gryphon, Malencontre turns into a Kangaroo!

I am very happy to have found this edition at long last. It will be fun to read as I'm working on improving my French! 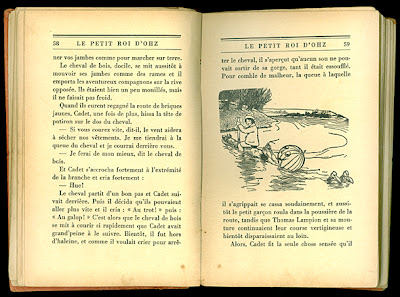 So I can't believe I haven't come across this site before. I am an avid Oz fan (well, personally, of the original Baum books) and I speak and read French. I have a small paperback copy "Le Magicien d'Oz" but I was wondering WHERE you found Petit Roi? Any help would be appreciated!