The popular comic book series Fables, published by DC Comics's Vertigo imprint has featured Oz characters since the very first issue. But the Oz characters have long remained in Fables's background, letting other characters from fairy tales, folklore, and nursery rhyme take prominence. Recently two Oz characters moved much closer to center stage since the Fables business office in Manhattan was destroyed by the Dark Man: Ozma and Bufkin the winged (now wingless since the showdown with Baba Yaga) monkey. 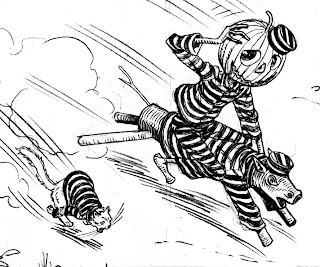 If you're an Oz fan and you haven't been reading the award-winning Fables, a perfect time to start is approaching fast. The very next issue of Fables,  #101, features some characters you might possibly recognize. And if the style they're drawn in looks familiar, that's because the guest penciler for issue #101 is longtime Oz illustrator Eric Shanower. To the right is a sneak peek at some of his pencil art for Fables.

Fair warning - the multi-issue story arc that begins in Fables #101 will be one that Oz fans will want to read. So don't get left behind! 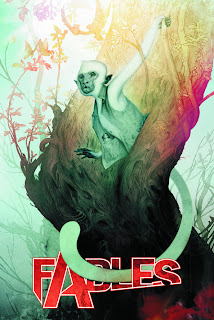 Fables #101 is written by Bill Willingham.
Pencils are by Eric Shanower.
Inks are by Rich Friend and Andrew Pepoy.
Color is by Lee Loughridge.
Editing is by Shelly Bond.
And here's the cover by Joao Ruas, featuring Bufkin the (formerly) winged monkey.
Posted by David Maxine at 5:59 PM

I'm a big fan of Fables and have read the entire series up through the end of the 'Great Fables Crossover,' but in the past I've waited to read them after each story arc has been collected into a trade paperback. But thanks for the heads up on the Oz story line and Eric's illustrations. I may have to start buying these issues as they come out.

The regular "Gang Of 4" Oz characters were featured in-&-out of the Jack Of Fables series. The Gnome King was also an ally of the Advesary.

That Jack is so Neill-esque that for a mo I thought, is there a Neill illustration I'm not remembering? The cat, too.