Jack Snow and The Magic Sled

A couple days ago Jared Davis's Oz blog featured a free on-line recording of Jack Snow's Christmas short story, The Magic Sled. I encourage you to go check it out. Listen to The Magic Sled here!

Snow of course was the author of The Magical Mimics in Oz, The Shaggy Man of Oz, and Who's Who in Oz. After Snow lost his job working at NBC he was hired as a staff writer for the Associated Hospital Service of New York and he edited their in-house newsletter, Inside AHS. It is very probably that Snow named the newsletter himself, as the AHS initials in the title could well be pronounced as "Oz". Jack Snow wrote The Magic Sled for the December 1955 issue of Inside AHS.

The illustration (at left)  is signed Richard Rodriguez. There is some very circumstantial evidence to suggest the illustration might be the work of one of Jack Snow's boyfriends. Yes, Snow was gay in case you hadn't heard. The original AHS printing of the story includes a very brief introduction by Snow, too. If you click on either of these images they will expand to a much more readable size.

Hungry Tiger Press reprinted The Magic Sled in Oz-story No. 5 where it was newly illustrated by Eric Shanower (see below). 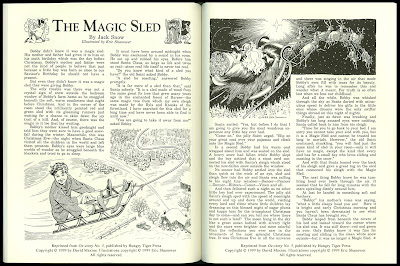 It's a cute story, and one of those background bits that really flesh out the Oz mythos I'd like to know more about the magic sled, why it was made and how it came to be lost, and find its way to an American boy, I have an idea on it I might put into my own Oz story (even though I mostly stick to Baum).

The "our Saviour" line is interesting... not that a gay man can't be christian cause there are tons that are, but I was just wondering if writing like that was part of his cover, I very much doubt Baum would ever put a line like that in one of his stories.

Thanks for the linkage, AND the illustrations!

Bobby in the Richard Rodriguez picture reminds me of my baby brother Daniel, who voiced Bobby in the podcast. (He visited one day, and I pulled him into my room and got him to record the two lines.)

I blogged about the story last year, where I argued that the whole story is likely Bobby's dream, as that's the way the story reads, and that although Santa mentions Burzee, his reindeer have the same names as they do in "A Visit From St. Nicholas." Also, he's Santa, and not Claus.

But still, a very lovely story!