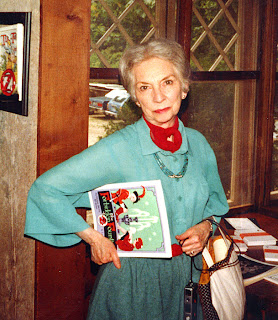 I first wrote to Eloise Jarvis McGraw in 1979 when I was in my mid-teens. Her Oz book Merry Go Round in Oz was almost impossible to find and, on a long-shot, I sent her a note asking if she had any copies. I had also recently acquired a few of her non-Oz books and I asked if she'd be willing to sign them for me if I mailed them to her with return postage. She quickly wrote back and explained that her "author's copies" of Merry Go Round were long gone but that she'd be happy to sign the other books. I packed them up and sent them. In no time they were winging their way back to me. I was very excited! I'd made a connection with an actual Royal Historian of Oz!

I wrote her a thank you letter, she wrote back, I wrote her, and somehow we became pen pals. At first I assumed she was just being friendly to a non-adult "fan". But there seemed to be more going on than that. By the time we'd exchanged half a dozen letters some of hers were getting to be four typed pages - single spaced!

She was writing me about projects she was doing, her upcoming trip to Europe,  messing about the house, her print-making (she was trained as a fine artist before she ever started writing). I lapped it all up! It sounded so great! I wrote her about my life, too, but somehow I didn't know exactly what to tell her because my life was a chaotic mess. My parents had divorced two years earlier, we'd had a terrible house fire the month my parents' divorce was finalized. I was overly shy, somewhat chubby, and very inhibited.

A year later we finally met face-to-face at the 1980 Ozmopolitan Convention. Eloise and I talked a lot, and my mom, sister and I drove her to the airport at the end of the convention. Bad traffic and bad directions caused us to get to the airport just in time for Eloise to miss her flight. I was mortified! I was also still overly shy, somewhat chubby, and very inhibited. We continued our correspondence though. I sent her stories I'd written, and told her about my gourmet cooking class in high school. Eloise was a gourmet cook in case you hadn't heard.

In 1983 I was going to go to the Winkie Convention in California by myself for the first time. My family and I lived in Minneapolis at the time so this would be my first major trip without a parent. Eloise was going to be attending too, with her daughter (co-author of their two Oz books) Lauren Lynn McGraw. Eloise wrote and suggested that if I could fly into Sacramento the day before the con we could stay at a motel in Sacramento, have dinner, and drive into Yosemite Valley for the Winkie Con together. Of course I accepted.

I landed in Sacramento in the afternoon and took a shuttle to our motel. About 4:00 Eloise and Lynn arrived. Eloise came to my door and said they wanted to clean up for a bit and that I should meet them at the bar in the hotel for a drink at five o'clock. The drinking age was eighteen in 1983 Hooray! [Apparently not! See comments] I wandered over to the bar and Eloise was already there. Lynn joined us a few minutes later. I ordered a Vodka Tonic.I must have been copying either Eloise or Lynn's drink order because I'm fairly certain I didn't even know what Tonic Water was! We went out for dinner to a Chinese restaurant that was a favorite of Eloise's. We had a relaxed and leisurely "grown-up" dinner with a bottle of good wine.

The next day we met for breakfast. Eloise showed me the distinct way she ate waffles. She ate the center first, leaving the outer ring for last. Then we drove into Yosemite Valley for the Oz convention. We got there fairly early and the Oz club's president, Peter Hanff, asked if I wanted to help greet the conventioneers at the registration table. I'd never been asked to help like that before.

The 1983 Winkie Con was great; and it had a huge impact on my life. It was while sitting at the Registration Desk that I met Eric Shanower for the first time. I was convinced he and I should become the best of friends. But apparently I was a little full of myself (I had just arrived at the con in the Royal Historian entourage in Eloise's white Mercedes) and Eric found my gloating to be a bit much. He eventually got over it and we've been together for over twenty years now. But that's another blog post! The whole con was great! Especially the Saturday night party (click here for a report).

Mid-day Sunday, the convention was over and Eloise, Lynn, and I headed back for another night in Sacramento. The next morning they departed for Portland and I flew home to Minneapolis. It had been a wonderful trip! But I couldn't bear one more wasted second of being overly shy, somewhat chubby, and very inhibited - and I determined to change my life.

This is now my favourite of your blogs, the last one was the 1983 Winkie Con, how fantastic an experience to talk to Eloise in that way and be part of her entourage and the life changing experience for you afterward.
Who wouldn't be a bit full of themselves after that day :)

How exciting to exchange words with something of an idol and actually become friends with them. I'm really looking forward to the continuation of this story and seeing how you changed your life.

You don't look too chubby in the picture.

Great post!
And I don't see any chubbiness in that picture either--you should have seen me in 1983.
But I have to question you on 18 being the drinking age in 1983--it certainly wasn't in California. But I won't turn you in.

Thanks. Peter Hanff wrote me about the CA drinking age too. I have no idea what happened! I was NOT 21 yet in '83 and I DID drink at both the bar and the restaurant. Maybe because I was with two adults (one the right age to be my mom, and the other the right age to be my grandmother) they assumed all was fine. Some states do allow for underage drinking with adult supervision - I'm not sure how California viewed such things.

Also, to all of you that see no chubbiness. Thanks! Actually I dont see any in that photo either - though I do in a few I'm not posting.

However, I'm using the word as I understand it- to mean a little bit overweight, which I was. I was not using it as a euphemism for obese. As I remember it, I'd say I was about 15 to 20 pounds overweight.