A couple weekends ago Eric Shanower and I were in Los Angeles to see the latest preview of Debbie Reynolds's Hollywood costume auction. Two friends joined us, and after breakfast and a proper perusal of Debbie's old clothes, we set out on an Ozzy adventure to go find the grave of Toto from the MGM Wizard of Oz film.

It seems that Toto's original grave was paved over when they built the Ventura Freeway in 1958. Since then there has been no way to visit or pay tribute to Dorothy's little dog. But a few months ago someone rectified the situation. JP Myers created a Facebook page and publicity drive to get Toto a proper memorial, and on June 18, 2011, it was unveiled at the Hollywood Forever Cemetery.

Alas, Toto's remains are still under the Ventura Freeway, but there is a nice bronze version to commemorate the canine hero. It was a bit of a chore to find the little dickens. We walked around for a long while looking for him, but had no luck.  After we found no help at the cemetery office or in the flower shop we finally brought up a video of the dedication ceremony on my iPhone and saw it was near a high wall. Once we knew that, we set out walking the perimeter of the cemetery and we eventually found him. He is just in front and to the right of the huge Douglas Fairbanks grave and not too far from Johnny Ramone. 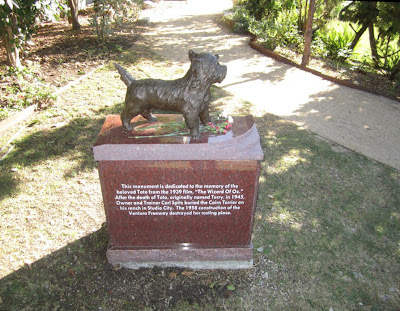 The marker is very handsome and I'm sure Toto would be very pleased. This was a very spur of the minute visit and I really had no idea what this cemetery was, but many movie stars, composers, and artists are buried there. Take a look at the website link above and plan to spend some time walking around after you visit Toto. And remember Toto prefers dog biscuits over flowers! 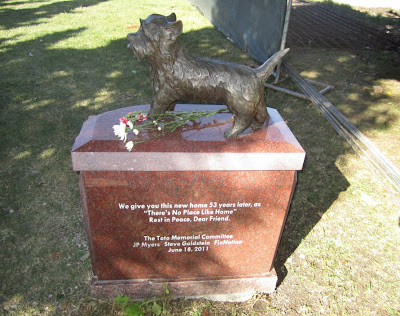 That's a beautiful memorial, but it's a shame they left his remains under the Ventura freeway. I wonder who or what else is still under the freeway.

If only there was a way or person that would allow Terry/Toto's actual buried remains to be taken to its new and lovely grave . . . but I know digging up a grave is illegal.

It's just not very realistic to disrupt traffic for weeks in one of the largest cities in the world, rip up a freeway and replace it at the cost of several million dollars to move little Toto. And it's highly unlikely anything is even left after being buried for sixty+ years. Nice thought though :)