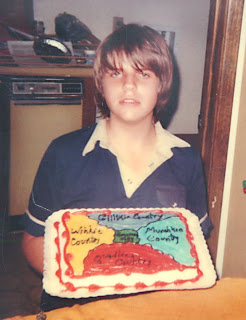 My parents divorced in the summer of 1977, and within a few weeks of that, our house burned down. The family badly needed an escape. So my mom and sister and I went to the Winkie Convention in Yosemite, California. It was a life-changing experience.

I returned home full of courage and very Ozzed up. My childhood love of Oz shifted into high-gear. I began to eat, sleep, and breathe Oz - whether it was pleading for an advance on my allowance to buy a another first edition or requesting an Oz map on my birthday cake. And it wasn't enough to buy every Oz book in sight and turn my bedroom into the Royal Oz Museum of Greater Albuquerque, I wanted the entire family to be Ozzy. I suggested to Mom we needed a custom license plate for our car. For some reason mom agreed. 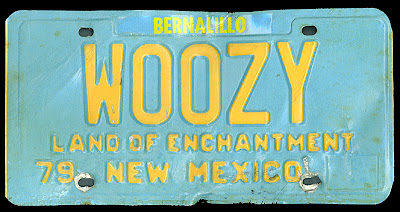 As you can see, I picked my favorite character's name. But also because I knew the custom plates in New Mexico were blue and of course were rectangle-shaped. The day it arrived I rushed out to the car to bolt it on. It got a lot of attention! People would honk and wave, they'd also give our car a wide berth. It took several weeks for us to realize that "Woozy" had a very different meaning to the average schmo on the streets of Albuquerque than it did to me (and my Ozzy family). But the car remained Woozy until we sold it several years later.

In 1978 we returned to the Winkie Convention with our Woozy mobile. And to make it even Ozzier, I made an Oz flag to go on the radio antenna. It came out exactly as I'd wanted except that I didn't know how to embroider an "Oz" in the center - so I left it off. When it was finished I carefully folded it and put it in the glove compartment so we wouldn't forget it. After we entered Yosemite and were about five miles from the Wawona Hotel where the Winkies met back then I had mom pull the car over. I got out, attached the flag to the antenna, and we sailed on in to the Wawona, Oz colors flying. 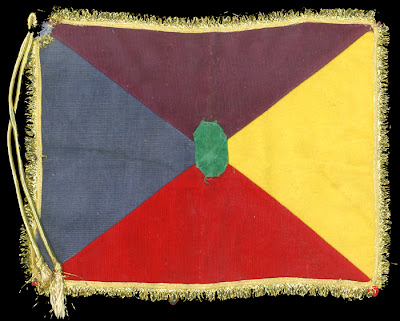 Mom is gone now; but I still have the license plate and Oz flag. I don't like to admit it, but it seems pretty obvious to me now that I used Oz to replace the family that was dissolving before my eyes. It quite probably saved my life.
Posted by David Maxine at 7:00 AM

Wow, what an emotional and speechless post you made.

Sorry for your losses.

I hope you've found some solice (?) and/or relief . . . *sorry, don't quite know how to word this situation properly*

Gosh Sam - I wasn't expecting condolences on my parents divorce, or the burnt down house, or anything really. All this stuff happened thirty four years ago! But I appreciate the sentiment none the less :)

Very moved by your post. My family had a similar experience around Lord of the Rings, of which my mother made a lifetime study. She encouraged us all to read them when they came out in the Ballantine PBs in the late 60s, even paying us 25 cents (or as I thought of it, two comic books) per book to do so, despite the poverty resulting in Dad's refusal to pay child support for his five kids.
When her health was failing, I took her to the films.
She didn't make it to the third movie, and to this day i can't bring myself to watch it all the way through.
So your Oz family story rings true for me too.

david, this was an amazing post. you probably dont remember me, we were friends on facebook back when i had one.
i related to this so much on so many levels. oz also helped me through my first years of life, including a very, very nasty divorce my parents had when i was eight. once we moved my mother decided to take us to see the wizard of oz in a run down theatre outside town. i always consider seeing that beautiful old print churn out on the big screen a fitting end to my childhood. i devoured all of those oz books again and again, they gave me strength during some truly traumatic times. through all my endless moves and loss, i've managed to keep the copy of the first book with illustrations by denslow from when i was at least four (loved halfway to death, no doubt) and will treasure it forever.

thank you, thank you thank you.

Hi Thomas - remind me who you were on MySpace - I'm sure I'll know who you are.