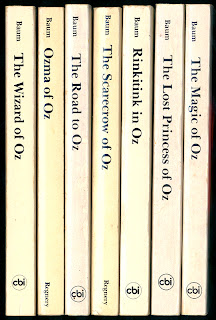 A friend and I were recently discussing the Henry Regnery/Contemporary Books releases of the L. Frank Baum Oz titles. These books were available for a short time in 1978-79. They look much like undersized versions of the better-known Rand McNally paperbacks from the 1970s.

Regnery had owned the rights to the Oz books for over twenty years and had tried very hard to reinvigorate the series by issuing abridgments, a new Oz book, major publicity, and finally repackaging the fourteen Baum titles into the "white editions" we all know from the 1960s and '70s.

Around 1971 Regnery struck an agreement with Rand McNally to issue paperback versions of the "white editions." They were the same size as the hardcovers, but much less expensive, retailing originally for only $1.50.

By 1978 Regnery's attitude toward the Oz books was somewhat ambivalent. But not wanting to sever their long association with L. Frank Baum, they decided to cut costs and reissue the Oz books as undersized paperbacks and put the cloth-bound "white editions" out of print. The paperback rights were withdrawn from Rand McNally. Fred Meyer announced that the Rand McNally paperbacks were officially out-of-print at the 1978 Winkie Convention.


These new Regnery paperbacks were quite small, measuring only 5" by 7 1/2", and retailed for $3.95, double the then $1.95 Rand McNally had charged for the full-size paperbacks. Regnery created new cover art for the new paperbacks - simplified versions of Dick Martin's "white edition" covers. Some shading lines are removed from the images and the faces are rendered a bit simpler and more "modern" looking. The title and credits were replaced too with more modern looking type.

The new mini-Oz books dropped the back cover illustrations used on the backs of the "white editions" and replaced them with the front cover artwork sans type. The interiors of the books are just a down-sized version of the hardcovers with the end papers eliminated. The mini-edition of The Wizard of Oz has the illustrations printed in colors just like the "white edition."

I bought these little books when they came out. I recall two releases a few months apart. But I was surprised when I noticed the publisher info had changed. Some were published by Regnery. These say Regnery on the spine, "Henry Regnery / Chicago" on the title page, and list Regnery's address (180 North Michigan Avenue) on the copyright page. Other have CBI on the spine and list the publisher as Contemporary Books, Inc. on the title page and copyright page at the same 180 North Michigan Avenue address. Exactly what's going on is unclear. It is my memory that the Regnery imprint came first, followed by the CBI imprint. I bought one each of the books I found. My understanding is that CBI owned Regnery which owned Reilly and Lee.

Just as all this is happening in 1978-'79 Judy Lynn and Lester Del Rey (of Del Rey books) have a notion they would like to try issuing the Oz books as mass-market paperbacks. Regnery/CBI agrees and the mini-Oz books are quickly put out of print, thus ending the last connection between L. Frank Baum's Oz books with their original publisher.

I began this blog by saying a friend and I were discussing these little books. The debate point was how many of the mini-Oz books were issued. I was actively trying to obtain them as they were issued and went so far as to try and keep track by getting on the CBI catalog list. I never found evidence of more than seven of Baum's fourteen being issued - the seven you see in the photo above. Over the years I have kept my eyes out for others, scanned shelves of friends' books, and I have yet to find any evidence the others were ever published in this format.

I did however notice that some of my friend's copies (he doesn't have all seven) have differing publisher imprints than mine: he has CBI versions of Ozma and Rinkitink, showing that those two titles at least got more than one printing. My friend immediately pointed out that the 1988 revision of Bibliographia Oziana says all fourteen were issued. I found it hard to believe that in decades of being on the lookout I had never once seen one of the missing seven titles. And in my opinion it doesn't even seem like there was enough time for the series to have been completed before Del Rey took over. I have asked Peter Hanff and Douglas Greene, who together did the revisions for the 1988 edition of Bibliographia Oziana, about their claim that all fourteen were issued. Neither had much interest in these late printings and the claim that all fourteen were issued seems to have been unverified.

So here's my little query: Does anyone out there have Regnery or CBI paperbacks of Land, Dorothy and the Wizard, Emerald City, Patchwork Girl, Tik-Tok, Tin Woodman, or Glinda? If you do, please comment and let me know what you have. I'd also be happy to hear if you have any different combination of publisher imprint. You can see which titles I have as CBI and which I have as Regnery by looking at the first photo above.

I neglected to mention that Rand McNally did keep their WIZARD and LAND paperbacks in print as these two titles were in the public domain.

I do have a question: in later Reilly & Lee color plate-less editions of "Dorothy and the Wizard in Oz," a number of color plates were obviously redrawn as black and white illustrations. Did Dick Martin do these? They were also used by Del Rey.

@Jared - Yes Dick Martin redrew several of the color plates as line art for the white edition. They're pretty good but one can see the Dick Martin style in them nonetheless.

Interestingly, Marcus Mebes and Peter Hanff recently discovered that some of the earliest "white editions" of DOROTHY AND THE WIZARD used up some old 1950s text blocks.

Also, Dick supplemented almost all of the white editions in some way: using the MAGIC endpapers as text illos in MAGIC, adding the map of Oz to LOST PRINCESS, adding the original "cut"ownership leaf to DOROTHY AND THE WIZARD, etc. WIZARD was actually wholly reworked by Dick Martin and he added in a few new Denslow illos from the comic page and a non-Denslow drawing of Dorothy and Toto from a 1901 ad.

I remember when these started to appear, because they published Lost Princess and Rinkitink, the two titles that Rand McNally never published. But, they were smaller than my R/M paperbacks! Consequently, I never bought them and finally picked up Reilly & Lee white cover editions of those titles. I don't think I've ever seen all fourteen titles in this format - but I'll admit, I wasn't looking too hard...

@Bill - I'm surprised you never had RINKITINK and LOST PRINCESS before 1979. I'd broken down and bought white editions to fill in the non-Rand McNally titles before these little ones started coming out. I had to byt hardcover editions of TIK-TOK and GLINDA, too, as those Rand McNally titles continually eluded me.

I guess I've just always had an odd fondness for these weird little editions as they were in effect the very last Oz books published by the original publisher.

My first copy of "The Magic of Oz" was very similar to these, but it was published by Scholastic. And we probably know what their deal is.

Is this Regenry the same company that publishes exclusively right wing books now?

I was missing those two titles for a long time - in part because I didn't realize they weren't available in the same format as the other books I'd picked up. I always assumed I'd run across them some day. It had taken me a while to find the other Rand McNally titles - it was around 1974, and I used to hit every bookstore I ran across looking for them. For whatever reason, Oz books just weren't that available around me!

@Scott - Alas, Henry Regenry was extremely right wing, and his publishing house published a lot of anti-commuunist crap along with the Oz books.

I only discovered this today when I ran across his autobiography on Google Books:

MEMOIRS OF A DISSIDENT PUBLISHER

Just goes to show that Oz fandom cuts across all political beliefs...

Or perhaps, deep-down, everyone loves a socialist utopia that understands money is inherently evil ;)

Well, from e-mail comments and feedback thus far none of the other seven have turned up yet.

This is very interesting.
I'd be happy if you could continue to show us various Oz covers through the years.
Does anyone else remember the Aerie titles? The cheap 2 for a dollar walmart books?

I hope you still have someway of checking for newer posts!

As I child I bought both of the scholastic Regnery/CBI books available (in fact, as I sit here, they are sitting at my right elbow!). How does one even find the other 5 ones? :)

I'm slowly collecting the Books of Wonder edition, and am having problems acquiring editions with the spine art on the dust covers. Do you have any suggestions on how to go about this: