Picnic with the Royal Historian

I recently ran across a little stash of photos that has prompted me to continue the blog-story I began last December about my friendship with Eloise Jarvis McGraw (author of Merry Go Round in Oz, The Forbidden Fountain of Oz, and The Rundelstone of Oz.) You can read part one by clicking here.

I returned home from the 1983 Winkie Con, determined to change my life. I had always loved the theatre and while I didn’t know exactly what I wanted to do, I started taking acting classes at the Guthrie Theatre's outreach program. Within a few months I was working there, first as a stage management intern, then as Production Assistant and stagehand. By the next summer I felt I had my life by the tail and could hardly wait for the 1984 Winkie Con. Eloise had invited me to fly to Portland, Oregon, and stay with her and her husband Bill for several days before the convention, and then the three of us would drive down the west coast to Winkies, which was being held for the first time at Asilomar.

Eloise and Bill (who also wrote children’s books under the name of William Corbin) picked me up at the airport and drove me to their home in Lake Oswego. After being shown the guestroom I was to occupy, Eloise gave me a tour of the house, which she and her husband had designed. It was a multi-level home, lots of wood and glass, very inviting.


She shared a writing room/library with her husband. One wall was lined with books: books they had written, reference works, and other children’s books. Near the big window at the end of the room were two facing desks (or was it a partner’s desk?). In any case, it was clear they worked easily in close proximity. One thing Eloise showed me was her computer, one of the first home computers I’d seen close up. Eloise had switched from her Selectric typewriter to the word processor a year or so before. She loved it! I was quite impressed that a woman of almost seventy had made the shift to this new technology so easily and happily.


That night Eloise cooked dinner - she showed me all of the neat little bits of architecture she had worked into her kitchen. Eloise was not very tall, and I recall that she had designed the kick-boards under the kitchen counter-tops to pull out as a sort of "stepping-stool" so she could knead bread and do food prep more comfortably - she was a gourmet cook. Alas, I don’t recall what we ate that night, but she had baked a loaf of French bread and she took me down into the wine cellar to help her pick a bottle of wine. The McGraw wine cellar was built into a natural cleft in the rock that the house sat upon, cooled by the earth, a true wine cave. I joked that it looked like her own private entrance to the Nome Kingdom, which she thought very funny.

Eloise was an artist and print-maker. The lowest floor of the house was her art studio. She was preparing what would be her only Oz print as a donation to the Winkie Convention auction. She had a little work left to do on it and she showed me how all the various print blocks worked, the different colors, etc. She had a big stack of proofs and samples and little sketches for the Ozzy print. She was planning to throw out these preliminary materials - I volunteered to take them home with me and still have them

The print was a design for a coat-of-arms for Bzz-antium, a kingdom of bees featured in an Oz manuscript Eloise was writing at the time. That manuscript was never published.

I especially enjoyed breakfast at the McGraws. There was a sort of breakfast nook, very sunny, and we just had coffee, juice, and a couple slices of Eloise’s homemade bread, which we toasted. Eloise had me try some very nice marmalade she had brought home from England. It was the first time I’d ever liked marmalade.


Hanging on the wall in the breakfast nook was a very large watercolor self-portrait of Eloise’s daughter, Lynn McGraw, co-author of Merry Go Round in Oz and The Forbidden Fountain of Oz.

At one point I asked Eloise if she still had her childhood Oz books. She took me upstairs to look at them. They mostly dated from the 1920s when she had received them as a child. A few more were acquired for her own kids, Lynn and Peter. As we looked through them she decided she ought to give one to the Winkie Auction - I think she asked my advice. She settled on parting with a first edition of Scalawagons of Oz, a book that had crept into the collection via a cousin when Lynn had been a child. That copy of Scalawagons played an important part in Oz book history, but I’ll save that story for another blog. (Click here to read) 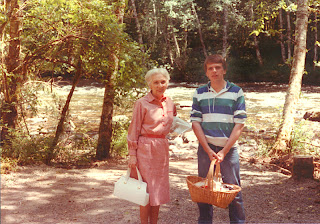 My last full day in Lake Oswego was the Fourth of July. Eloise proposed we drive up Mount Hood and have a picnic. She packed a grand lunch and we spent the day on the mountain. That evening, after we got back to Portland, we all went over to Lynn McGraw’s house. I think Eloise and Bill dropped me off and I visited with Lynn for the evening. She showed me her paintings (she is an artist) and I bought two watercolor studies. Then Lynn and Willie (her partner at the time) and I had a light picnic dinner and watched the fireworks.

Lynn drove me back to Lake Oswego. When I went in I found Eloise had already put on her pink flannel nightgown. I was struck by the informality of it, how comfortable Eloise had become having me around. We stayed up and talked for a bit and listened to James Galway playing in a Fourth of July concert. The next morning we began our drive down to the Winkie Convention.

For the most part I’ve been relating all the stories and anecdotes that relate to Eloise. What isn’t included here is the interest she took in what I was doing with my life: the acting classes, my job at the theatre, my story writing. My visit with the Royal Historian turned into more of a visit with a new grandmother.

I read in a Bugle about people visiting Ruth Plumly Thompson and loved hearing them. I made a point to ask Ruth Berman about her visit to RPT as well in an upcoming podcast.

In the same vein, I'm glad to see this about Eloise McGraw. It's easy to see the Royal Historians as untouchable legends, so it's enlightening to see them as real people. Thanks for sharing, David, and if you got anymore, I'm reading! (As always.)

What a fine reminiscence.

Thanks Jared - I remember being struck by those BUGLE reports of folks visiting Thompson, etc. and felt much the same way.

Nice photos here, and I like your shirt there, David!

I'm sure you had a great time there and then, but I can't help but notice you looking a little solemn. Nervous?

Sorry . . . too bad about Eloise's unpublished Oz manuscript as well.

@Sam - I noticed that, too. I think I just have a big solemn streak. Also, this is just before I got braces on my teeth and back then I think I seldom smiled very wide. I don't remember feeling solemn at all! ;)

Thank you for sharing the photos and memories, David. I really enjoyed them.
While Dan and I were living in San Diego at the time, we did visit Portland every once in a while. On one of our visits, we did visit with Eloise and her husband, Bill, for an afternoon. I do remember being shown their beautiful house near the Lake.
We brought some of our Oz books (along with a few others that Eloise had written) and she kindly signed them. It was a perfect afternoon and Eloise was a perfect hostess.
Dan did visit with RPT several times while she was alive.
Again, thanks for the memories! I do really enjoy your blog.

I never knew Dan had met and visited with Ruth Plumly Thompson! I'd love to talk with him some time about that.

I always enjoy these tales of meeting Eloise what lovely memories to carry with you :)

Very interesting remembrances! It's amazing how your story parallels with Justin Schiller's relationship with Jack Snow, and how the Oz authors were indeed creating more than just fictional characters on a page.