The Scarecrow Goes to College! 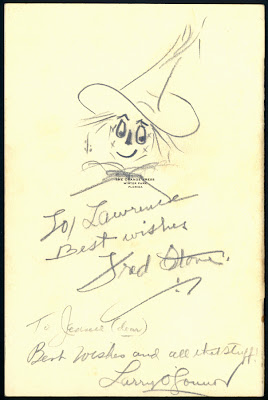 In doing much research on the 1903 Wizard of Oz musical for my 2 CD set of Vintage Recordings from the show and my current book project, I have become a fan of Fred Stone who created the role of the Scarecrow. While I have only read of his amazing, amusing, and acrobatic antics on stage, I have seen quite a few of his films from later in his life, and I've got quite a little scrapbook of photos, clippings and odd bits relating to Fred Stone.

One thing I did not have until today was one of his Scarecrow sketches. Occasionally when he signed his autograph he would doodle a Scarecrow. I've seen a dozen or so of these over the years, but either lost out in the bidding, or thought the asking price was too high, but I knew I'd eventually find one.

I'm quite happy with this one. It is large, measuring about 6" x 9" and drawn in pencil which I think adds some subtlety to Stone's drawing. This particular sketch is on the back of a guide book for Knowles Memorial Chapel at Rollins College in Winter Park, Florida dated 1937.

I have not yet deciphered the second autograph. Any guesses?
Posted by David Maxine at 10:45 PM

It looks like it could be Larry O'Connor? At any rate, what a fun piece!

It's a coffee-table type book on the 1903 Wizard of Oz musical.

The news of your book project is most exciting. I have long been fascinated by the 1903 production and after purchasing your 2 CD set of the music I know you will do a fine job. I can hardly wait!