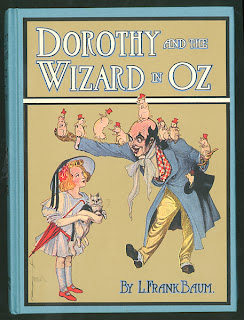 If this was just an attempt at a lovely edition of Dorothy and the Wizard in Oz, this review might be a rave. I keep trying to be positive about the Bradford Exchange "facsimile" series, but after four books, the fact that they still can't get one right has greatly disheartened me. I will begin by saying that this is almost certainly the most handsome edition of Dorothy and the Wizard in Oz currently in print. It's the first of the Bradford books that is at least on par with the Books of Wonder edition and Bradford's lovely cloth and paper-label cover gives Bradford the win.

But when Bradford has stuck its chin out so far with claims that "no detail has been overlooked in recreating the precise specification of the original editions, from the quality of the paper, to the printing of the art plates" and their even more over-the-top "This masterpiece collection is 100% authentic to the ground-breaking first editions of the Wizard of Oz book series in every exacting detail," well, it's hard for me to give a passing grade to the at-best adequate reproduction and sometimes very poor design choices.

As usual with these reissues, the cover is quite lovely and authentic in feel. The color of the cloth, the spine printing, and the gold in the label are very similar to the original 1908 first edition, but the reproduction of the figures is a bit grainy. Another minor quibble, the 1908 first edition is bound in horizontally ribbed cloth and the BE cloth is not ribbed. I realize I'm being picky here - but I'm not the one that claimed the books were "100% authentic to the ground-breaking first editions."

The other problems are a lot more serious than a lack of ribbed cloth. The paper choice is not good. Bradford seems to like choosing bright white paper for these books when the originals just weren't ever printed on such stuff. The paper in Dorothy and the Wizard also suffers from pretty severe show-thru - something the original editions of the Oz books have certainly never had.

The reproduction of the color plates is generally adequate, but they could have been much better. The comparison below shows one of Bradford's more successful color plates, yet it is still far from ideal. Make sure to click on the images below to see the comparison in detail.


You'll notice the decided graininess in the Bradford plate at left. The colors seem dirtier, less pure. The figures in the doorway seem more gray than blue as seen in the original at right. Perhaps you've noticed that the Bradford image is bigger, too. Well, for some reason Bradford has enlarged all the text pages and color plates. For my money, that just shot any claims of "100% authentic" out of the waters of the Nonestic. What possible reason can Bradford have for enlarging the text and illustrations? Did someone use a wonky scanner?


Compare the two versions of the text illustration above. Again you can see how much the illustrations have been enlarged. But look how much detail Bradford is losing! The fine shadows in the Wizard's face, the subtlety in Dorothy's eyes, the fine lines in the Wizard's silken hat all dissolve into blobs and murk. I do want to point out that Bradford's reproduction of the line art is much better than the 1960s Reilly and Lee "white editions," yet why is Bradford's so sub par to my quickie 600dpi scan of the first edition for the blog? If you can scan something; you can print something. Plain and simple.


On first glance the end papers look pretty good, but then one compares them to the original and one starts seeing the deficiencies in reproduction. Why can't Bradford reproduce fine lines? Look at Eureka's whiskers, the finer lines in Dorothy, the delicate speckling of the trees in front of the palace. I can tell you Bradford made it hard on themselves by reproducing these endpapers in a rather idiotic way - they are printed in full color, not in just black and yellow as they should have been.


A close-up comparison of one of the towers shows how crude the Bradford reproduction truly is. The line art has swollen into a caricature of the original. How did John R. Neill's evenly speckled dots in the tower roof at right turn into the scruffy mess seen in the tower roof at left? It's just a crappy, crappy scan. The blobbiness and softness are no doubt worsened by printing the image in full CMYK color. If you enlarge the image above and look closely at the tower at left, you will see the bits of cyan (blue) and magenta lurking around. This image should be printed in black and yellow only. There would have been nothing wrong in Bradford's scanning the original endpapers in full color, but it's utterly ridiculous to have not split the channels and deleted the magenta and blue from the printing plates. It would have made a crisp clear image, printed in black and yellow just like the first edition. But why bother? What is this, a facsimile?

Bradford claims that their Oz book reprints are faithful reproductions of the first printings, but that's clearly not true. Some aspects of these books make it seem like they're trying to do a good job. The slapdash results of other aspects make it seem as if no one at Bradford cares. Their edition of Dorothy and the Wizard in Oz is an attractive book - much prettier and satisfying than their Ozma of Oz (my review of that book here) - but as a fulfillment of their promises of authenticity, Dorothy and the Wizard falls between the cracks.
Posted by David Maxine at 12:20 PM

My only hope is that some company who could do proper "replicas" decides to do their own series of the Oz books.

In all honesty, some of the BE pictures look like they were upscaled from little better than web resolution. I know that's definitely not the case, but the finished item speaks for itself.

"Trees"? I thought those were clouds!!

And I thought the same thing for the b&w image where Tiger attacks Jim, not realizing it was dust/dirt.

Yup, trees :) The shapes and speckled texture are much more tree like than cloud like. Besides Dorothy is at wall of the emerald palace and its the royal gardens between her and Ozma's palace. They trees are green after all when this drawing gets reused as the cover of EMERALD CITY OF OZ :)

Looks like BE is just trying to make a quick buck.
Shame they are just throwing these things together like this.

I hope they don't ruin Road's detailed illustrations or the "glitter" and detail in Emerald City...