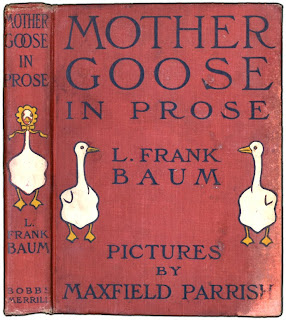 A few months ago I was perusing Paul Beinvenue's very fine Book Collector's Guide to L. Frank Baum and in the section on Baum's Mother Goose in Prose (1897) I saw the image Paul chose for the 1905 Bobbs-Merrill edition and said to myself, "Why did Paul use some odd-ball variant with the goose on the spine missing it's white stamping?" (See image below.)

Well, I read through the description of the 1905 edition in Paul's book and found no mention of any copy of the 1905 edition as ever having a white goose on the spine! Yet my copy, (see image at left) which I have had for years, is sitting on the shelf with its sunbonneted goose as white as can be! I contacted Paul (and a few others who are interested in such bibliographical peculiarities) and it seems I have an unusual variant. All other reported copies have a plain red goose on the spine (see image below). I like to think my "white goose" variant is earlier than the other "plain goose" copies.

Aside from just sharing an unusual copy of an already rare book - I blog about this to show that sometimes an interesting rarity is sitting right on your shelves and you don't even know it!  The moral, of course, is: pay attention to your books, learn a bit about book collecting, read the pioneering work on the subject, Bibliographia Oziana, and get a copy of Bienvenue's lovely and informative Book Collector's Guide to L. Frank Baum. 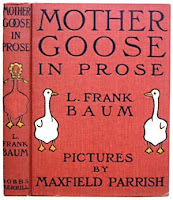 Mother Goose in Prose was Baum's first published childrens' book; and it was also the first book illustrated by Maxfield Parrish making the book doubly collectible. The rather prosaic title is quite apt in that Baum was in fact retelling some of the most popular Mother Goose rhymes in prose. He gives short story accounts of the entire backstories for Humpty Dumpty, Old King Cole, and many others. In our FREE Tiger Tales you can read the Three Wise Men of Gotham and Pussy-Cat Mew, though our on-line version of Pussy-Cat Mew is Baum's slightly revised version from L. Frank Baum's Juvenile Speaker (1910).
Posted by David Maxine at 12:41 PM

Thanks for letting us know about your very unusual Bobbs-Merrill variant of the 1905 Mother Goose in Prose. My copy lacks the white coloring of the goose on the spine.

The area that should bear the white was blocked in blind (stamped by a hot brass to create an indentation in the shape of the goose). That kind of stamping normally precedes the blocking in color, so I had assumed that the white had chipped off my copy. But I was glad to be told that most copies lack the white.

I hope others will check their own copies closely in response to your blog. It would be good to discover additional copies like yours.

I'm curious, too, as to how many other white geese copies migth be out there. After all, I didn't know my copy was unusual until I got Paul's book!

I think it would be nice if we discussed other unusual blbliographic oddities in future blog. If you ever want to pose any questions or queries - drop me a note!