The Lost Army of Cambyses 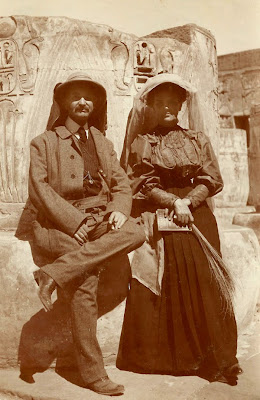 Today's BLOG is written by Egyptologist and Baum scholar David Moyer, who wrote the foreword to our new edition of Baum's 1908 adventure novel Sam Steele's Adventures: The Treasure of Karnak.
THE LOST ARMY OF CAMBYSES


In my foreword to the new edition of The Treasure of Karnak, I noted that in one of the letters Maud Baum wrote during the Baums' 1906 Egyptian tour, she refers to the Persian "invasion" of Egypt being the reason the priests of Karnak Temple threw the temple treasure into the temple’s Sacred Lake to save it. She does not mention Cambyses in that event, but does write that it was he who overthrew the colossal statue of Rameses the Great at his mortuary temple, the Ramesseum, on the West Bank of the Nile. I also noted that according to the Greek historian Herodotus, Cambyses set out from ancient Thebes across the Sahara Desert to consult the oracle of the god Amun at Siwa Oasis, but that the king and his army were lost in a sandstorm. Over the years, there have been many attempts to find remains of this army.

The latest attempt is that of two Italian archaeologists who have been working in the Sahara Desert for the past thirteen years and recently announced that they have found artifacts that may pinpoint the location where the mighty Persian army was swallowed up by a sandstorm in 525 B.C. If the brothers’ discoveries are proved correct, they will have solved one of the greatest mysteries of antiquity. According to Herodotus, Cambyses’s army, 50,000 men strong, traveled across the desert for a week reaching the oasis of El Kharga, 200 km west of the Nile, but after leaving there, nothing more was heard of them. The inhabitants of Siwa Oasis, however, claim that a few days later as the soldiers were eating their midday meal, a powerful and deadly wind rose up from the south bringing with it vast columns of swirling sand, engulfing the soldiers, causing them to completely disappear.

In 1996, while exploring to the south of Siwa, the two brothers found a pot buried in the sand with human remains lying nearby. Close by, a bronze dagger and a number of iron arrowheads were found. Although small items, they are extremely important as they are the first Achaemenid (Persian) objects (thus dating to the time of Cambyses), which have emerged from the desert sands in a location close to the Siwa Oasis. Also found was a silver bracelet, several small spheres - probably pieces of a necklace - and an earring, also of silver, dating to the time of the Persian king. In October 2009, the brothers announced their finds in a documentary film shown at a film festival in Northern Italy rather than through an archaeological journal, making it more difficult to corroborate their claim. Dr. Zahi Hawass, head of the Egyptian Supreme Council of Antiquities, regards it as "unfounded and misleading," adding that since the brothers had not been granted legal permission to excavate in Egypt, their story is not credible.

This is not the first time that claims have been made that remnants of the Persian army have been found. In fact as far back as the early 19th century, pioneering Egyptologist Giovanni Battista Belzoni searched in vain for clues to the whereabouts of the vanished army. In 2003, Paul Sussman, well-known writer of mystery novels, published The Lost Army of Cambyses, a thriller that mixed stories of the ancient legend with the politics of modern Egypt. Just recently, the head of Iran’s Cultural Heritage, Tourism and Handicrafts Organization announced that a group of Iranian archaeologists have been granted permission by Egypt to come there to study the remains. The organization has specified that they are not laying claim to the finds and that they belong to the Egyptian Government. This news, seen on the internet’s EEF Egyptian News site, also included a picture of skeletal remains, including skulls and miscellaneous bones. Like all reports of exciting discoveries in Egypt, including the very latest news of DNA studies to determine King Tutankhamen's lineage, which has the Egyptological world in a tizzy so to speak, one has to take this claim of finding the remains of the "lost" Persian army of Cambyses with a grain of salt until further corroboration. Personally, I’d love to see it proved, but must adopt a "wait and see" attitude.

Professor Moyer's foreword and all of Maud Baum's Egyptian correspondence are included in Sam Steele's Adventures: The Treasure of Karnak.
Posted by David Maxine at 5:00 AM