On July 10, 2010, the 1903 musical The Wizard of Oz will receive its first confirmed full-scale revival in over ninety years.  In this case "full-scale" means that it is the first production to use the original orchestrations and a twenty-eight piece orchestra. The single performance is taking place at the Canton Comic Opera Co. in Canton, Ohio, under the direction of Joseph Rubin. The image (at left) is a handbill from the last time the show played in Canton on August 28, 1908.

My infatuation with this long-forgotten show began about fifteen years ago when I discovered that period recordings of songs from the show survived on 78 rpm records and wax recording cylinders. This discovery combined four passions of mine: musical theatre, records, history, and Oz. I was utterly hooked! In 2003 I produced a 2 CD set of these Vintage Recordings from The Wizard of Oz. It is one of the projects I am most  proud of - and it was nominated for a Grammy Award as "Best Historical Album."

In honor of the Canton revival, our FREE Tiger Tune this month is the song "Carrie Barry" which was sung by Dorothy in Act I of the 1903 Wizard of Oz.. You can read more about the song, listen to a charming mp3 recording, and see a couple photos by clicking on the link above. The recording was prepared by James Patrick Doyle for my multi-media recreation of the show at the Centennial Oz Conference in Bloomington, Indiana, in 2000. The recording features an orchestration by Doyle and vocal by Stefanie Lynn. The original orchestrations (those being used in the Canton production) were only discovered a few months after my Bloomington talk in 2000 and they will eventually be the basis of our critical edition of the score.

You'll get a full-report on the Canton revival in about two weeks. Personally, I can hardly wait! In the mean time, listen to Dorothy Gale sing "Carrie Barry." 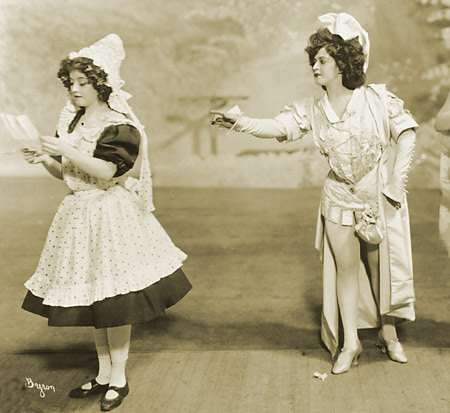 Was wondering where or how who found this great piece of history, considering it is being shown in Canton, Ohio.

good news CantonComicOperaCo added sammy, football, and the traveller and the pie to youtube. i hope they add more