25 Years of RETURN TO OZ 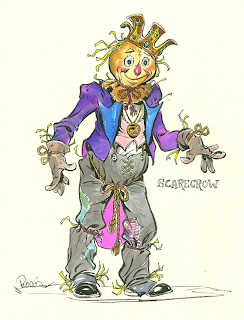 It's hard to believe that it's been twenty five years this month since the premiere of Walt Disney Studio's Return to Oz.

Many Oz fans have a sort of love/hate relationship to the film. The truly wonderful elements, Tik-Tok, Jack Pumpkinhead, and Fairuza Balk, are overshadowed by so many bad choices: electro-shock therapy for Dorothy, a Nome King in Ruby Slippers, and the film's murky ending. Is Oz just a delusion of Dorothy's or is Oz real and Ozma's aim with the Ruby Slippers really so bad as to send Dorothy home to find herself face down in the mud? The movie is such a disaster in so many ways! Yet the middle section of the film, from when Dorothy meets Tik-Tok until the Gump takes flight, is really terrific.

Presented here is a production design drawing of the Scarecrow from the film. It was drawn by comic book artist Michael Ploog who also drew the graphic novel version of L. Frank Baum's Life and Adventures of Santa Claus (1992).

There were several Return to Oz drawings I could choose from when I bought this one. But this one won out as it showed the Scarecrow in a different costume than he wears in the film. I especially like the purple tailcoat and Oz medal around his neck.

So happy Twenty-Fifth Birthday to Return to Oz!
Posted by David Maxine at 1:52 PM

THANK YOU for this!

Now I - and everybody else - can finally see this image in Full COLOUR, after so many sites of b&w!!

Perhaps I'm biased-- because Return To Oz is my absolute favorite movie of all time. Yet, even as a longtime Oz fan, I really can't think of ANY misstep with this movie, not even the ones you mentioned.

- If the Cowardly Lion has always been portrayed with his mane in a big bow like an oversized Shih Tsu, I have no trouble seeing the Nome King wearing the Ruby Slippers. Much like the early 1900s itself, Oz has a very different definition of masculinity than our current idiom.

- Ozma sending Dorothy to a field is kind of a nitpick, but it's not like Ozma knew where she lived-- so she presumably sent her to a safe distance from the clinic where they'd met, which neither of them knew had already burned up.

- The electroshock therapy was, in my opinion, an inspired extrapolation from the 1939 movie's ridiculously contrived "it was all a dream" ending. No one has dreams as realistic as Oz unless they are in fact severely disturbed, after all. Some people say it's too dark-- to which I respond, darker than the 81 decapitations in the original book?

Happy 25th anniversary to the movie that made me love Oz. Each time I watch it I see something new-- just yesterday I picked up for the first time on how Uncle Henry's limp is forgotten in his excitement to find Dorothy at the end. Rather than dating itself with corny jokes and timely musical numbers, Return To Oz is truly timeless.

(Yeah, this totally isn't the place to start an argument, I know, but I was inspired)

Don't get me wrong - I'm not saying I don't recognize RTO is many people's favorite film - but my criticisms weren't based on personal preferences but general assumptions about quality film making. These same problems have been stated by the director, producer, and other friends who worked on the film.

One of my absolute favorite films is PUFNSTUF. Would I pick it to take to a desert island over CITIZEN KANE? Absolutely!! Is PUFNSTUF as good a film? Not in a gazillion years.

I love much of RTO - but IMHO to use the aspects of the MGM film that have been the most HATED parts: the Kansas counterparts and making it all a dream were very poor choices. This is also one of the box-office killers It set up a direct comparison to Judy Garland and MGM and had the film tried to stay as separate as possible it would have gone down much better.

No beautiful long shots of the Emerald City is a bad flaw (caused exclusively because Disney cut the $$$ for it) And the Nome King wearing the slippers is just distracting - and that is not good film making. They are women's shoes and at the height of the drama you shouldn't have to block fleeting thoughts that the Nome King is a cross-dresser and looks a little silly.

And the bad final-cut of the film makes it impossible for anyone to understand the Director's premise that Dorothy and Ozma are the same person!

I appreciate your comments and totally understand how hard it is to accept one's favorite isn't perfect - defending PUFNSTUF isn't easy! But in the end RTO was a box-office disaster. And while a small percentage of the world LOVES IT TO DEATH, far more think it's a weird, terrifying, and poorly made film.

RTO had a LOT of wonderful stuff - but it isn't gonna be anyone's example of a well-made film.

Regarding Ozma as Dorothy: You're right, I certainly didn't get that premise at all. Not even the novelization, which includes so many aspects of the movie left out of the final cut, acknowledges this idea that Ozma and Dorothy are one and the same. Are you sure this was an intention at all of the filmed version, and not an abandoned concept from an early script? Is there a deleted scene anywhere that makes this idea clearer?

I can't contest your other points because they come from such a different viewpoint than mine. Having been five when I saw the movie, it never occurred to me that the Nome King, or anyone, would balk at wearing magic ruby slippers-- perhaps if I'd known more of the gay Oz fan community's slipper-fetishizing ways, I'd see it from your perspective, though. After reading the books later, though, Roquat always seemed like the kind of guy who'd wear a full length ballgown and Disney mouse ears if it would make him more powerful, so it's difficult for me to fault him in any respect. (Besides, Ozma never seemed to have a problem with wearing that oh-so-masculine mud-gray magic belt!)

Thanks for your thoughtful and respectful rebuttal!

I wasn't really talking as someone with a slipper fetishist but more from what I perceived as well-made film making.

When the film was new and in the theatre, when the audience saw Nome King's ruby slipeprs it got a huge laugh and a lot of titters. IMHO, it hurts the film for the audience to be pulled away from it's identification with Dorothy and a big dramatic moment.

The Dorothy.Ozma thing was first brought to my attention by Walter Murch at an Oz Con and by Craig Miller one of the film's publicists I think. You can see the intent once you know about it - and it's even more evident in the rough-cut RTO that's going around.

I didn't intend any personal implications with the slipper thing, sorry!

Sadly, I contributed to the film's failure by not having seen it in theaters. Perhaps I'm glad I didn't, though-- the thought of the other viewers laughing at that crucial scene fills me with such impotent rage.

Still, I can't help but think that the movie was ahead of its time in that respect. Since it's my favorite movie, I end up showing it to all my friends, and although there's plenty of laughing at the corny parts, I've never heard anyone laugh at the dramatic reveal of the slippers.

For that matter, look at any of the quasi-ironic reviews on YouTube-- the Angry Video Game Nerd, Nostalgia Critic, etc-- and there's nothing but awe for what they perceive to be a lost classic. What 1985 audiences apparently considered a "Narm" moment doesn't even register on these sarcastic hipsters' radar. Perhaps my generation simply grew up more prepared for this kind of stuff, I don't know.

It sounds like movie viewers in 1985 were a-holes, though... which should be obvious, since the dummies skipped out on this movie!

No prob re slipper thing - I'm not offended in the least ;)

You are right about one thing - the movie would do much better today. There has been so much "dark Oz"and so many alternate rethinkings, and WICKED, and much else that RTO would just not be a problem.

In 1985 it was unprecedented and the studio seems to have had a huge conflict over whether to just make a cool Oz film or try and cater to the general audience who knew ONLY Judy Garland's movie. I just think the catering to the MGM crowd was a mistake. Those people still hated the movie even with Ruby Slipeprs and the stupid dream idea. If RTO had ignored MGM completely I think it would have been a stronger and probably more successful film is all.

Thanks for the intelligent and thoughtful comments :)