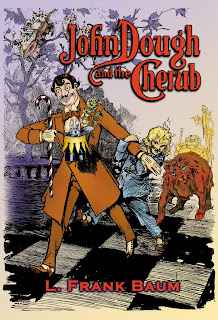 One of my favorite projects at HTP was our beautifully restored edition of Baum's 1906 fairytale John Dough and the Cherub. The book had been long out of print and it really deserved to be made available once again.

The illustrations were prepared from a 1906 first printing and were then meticulously cleaned up removing much dirt from the original engravings so the book actually has better reproduction than the rare original. Our edition of John Dough also has a great foreword by J. L. Bell. It's a thick oversized book and it just feels like a fairytale novel should.

As part of our 2008 publicity campaign we prepared some John Dough bookmarks featuring a recipe for Gingersnaps by the second Royal Historian of Oz Ruth Plumly Thompson. I've tried the recipe and it's a pretty good cookie! The recipe is given exactly as Thompson wrote it. But do read the "Modern Notes" at the end of the recipe!
GINGERSNAPS
by Ruth Plumly Thompson
Did you ever come out from bathing or come home from a long ride and find a plateful of hot ginger snaps and a glass of ice cold milk waiting for you? If you did, you will never forget how good it tasted, and because I want you to know, here is the recipe:

One cup of butter, one cup of molasses, one cup sugar, three-fourths cup of milk, one teaspoon of saleratus, two teaspoonfuls ginger.

Mix together with enough flour for a pretty stiff dough. Roll out thin, cut out into little round cakes and bake quickly.

You can eat just as many as you want, too, because they won’t give you the mullygrubs or the doldrums or anything like that!

Modern Notes by David Maxine
Saleratus is just an old-fashioned name for baking soda. Dough requires five to six cups of flour and is best chilled before rolling. Bake at 375 degrees for 12 to 14 minutes. Modern tastes may desire a teaspoon of salt. The recipe can easily be cut in half. This is a subtle, old-fashioned cookie. Enjoy!
Posted by David Maxine at 11:35 AM

I first saw the word "mullygrubs" when Thompson used it in Lost King. It was some years later that I realized it was an actual English word.