Happy Thanksgiving from Hungry Tiger Press!  Did you know that L. Frank Baum was a champion turkey carver? Well, he was, as you will see in the photo below.  Baum and his turkey are at the far right in the photo.


This undated newspaper article appeared in the Los Angeles Examiner; it probably dates from 1916. This soiree was an event put on by the "Uplifters," a sort rich boy's group connected to the Los Angeles Athletic Club. 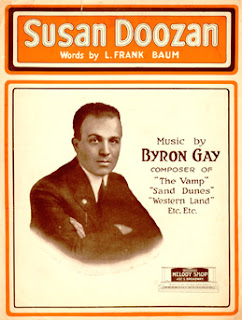 You might also note that the gentleman second from left is Byron Gay, who wrote the music to Baum's song "Susan Doozan." And at the end of the article one sees another name Oz fans will be familiar with, Fred Woodward, who played Hank the Mule in The Tik-Tok Man of Oz and the mule and other animals in all the Oz Film Co. movies. It's nice to know Mr. Woodward could kick up his heels with the best of them!

Another cool thing mentioned in the article is that after dinner the group watched some home movies of the "Uplifters Jinks" at Del Mar. Wouldn't it be fun to find those home movies and possibly catch a glimpse of Baum on film!

Read the full newspaper article below. It seems Baum's competitors thought Baum had an advantage having the smallest turkey. But in the end Baum and his carving knife won out!