Map of Oz Monday - Origins of the Oz Club Maps 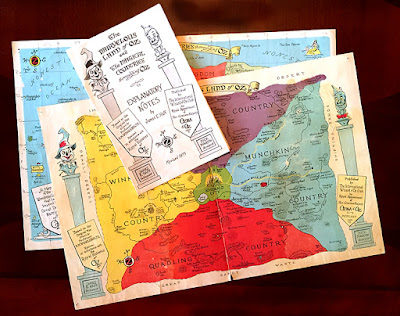 If any Oz maps can come close to challenging Baum's own maps of 1914 it is the highly detailed set produced by the International Wizard of Oz Club. We will spend the next several weeks discussing these maps' evolution, and their many pros and cons.

But I think a look at some of the origins of the Oz Club maps might be in order before we begin our in-depth analysis. The Oz Club maps were researched and designed by James E. Haff and drawn by Oz illustrator Dick Martin.

The Oz Club's maps were first published in 1962. Jim Haff certainly had an affinity for this sort of meticulous note-taking and puzzle solving; indeed he was a civilian cartographer for the U. S. Air Force. But the Oz Club's map project was begun by Robert R. Pattrick, who was already making notes and preliminary Oz maps when he died in August 1960 at the age of thirty-three. The Oz Club, and especially club secretary Fred M. Meyer, did all they could to honor Pattrick's legacy, and the "Explanatory Notes" for the Club's map set pays homage to Pattrick's preliminary efforts, stating:


The International Wizard of Oz Club is especially indebted to the late Robert R. Pattrick, whose enthusiastic and scholarly studies on Oz geography blazed the trail for the maps and were of immeasurable aid in their compilation.

Above you can see the only Pattrick map I know of that still survives. You will note that he has flipped Oz so that the Munchkins are on the right hand side of Oz and in the east. While there is no compass rose, Pattrick regarded Baum's 1914 compass as an aberration. Oddly, Pattrick did not flip the rest of the continent, thus it still generally matches the 1914 "Surrounding Countries" map. I believe he did this mainly to keep the map consistent with the text of Ozma of Oz where the Land of Ev is supposed to be across the desert from the Munchkin Country. Correcting for this minor textual inconsistency plays havoc with many of the later Oz books, but that seems to be what he did. I am unsure why Pattrick, the supposed Oz and Baum scholar, failed to make Hiland and Loland into an island and has made Regos and Coregos much smaller than Pingaree, when in the book Rinkitink in Oz it is quite clear they are much larger islands.

A few other things to note in Pattrick's map: he has added Thompson's Corumbia, Corabia, and Samandra to the northern Winkie country. Their shape and placement is nearly identical on the Oz Club map but Corabia and Samandra have switched places. Pattrick has also added Pumperdink, Mudge and Ragbad to the map. As we'll see when we get to the Oz Club's map of "Surrounding Countries," Menankypoo will be where Pattrick placed it, yet yet Jim Haff will have chosen to move Rash to the north

Several choices made by Pattrick were preserved in the Oz Club's maps, most obviously the combining of the Land of Ev and the Nome King's Dominion. Note the cute sign pointing the way to Ozamaland. Dick Martin and Jim Haff used that same solution for dealing with the very distant location (and indeed Pattrick's same little sign buoy!) on the club's "Map of the Countries Surrounding Oz".

One other aspect of Pattrick's map to take note of is that he has drawn the entire continent of Nonestica, though it is a bit uninspired, essentially just a modification of the original 1914 rectangular map (see his map above).

Now, there is one map that I still need to share with you as a progenitor of the Oz Club maps. This is the map drawn by Dick Martin for The Visitors from Oz (1960).


While this map is only part of an illustration, it holds many interesting details. First it is clearly a modified photostat of the1914 Baum map; the lettering matches the original map exactly. But Martin has also provided a coastline for Nonestica and a much more interesting one than Pattrick had drawn. I especially like the long peninsula jutting out from Merryland (click the map above to see it more clearly). For me, details like that spark the imagination! There is no good textual reason to add it (no such peninsula or harbor is referenced in Baum's Dot and Tot of Merryland), but it adds detail; and detail makes for reality. And to me, believing in the map is critical to me if said map is purporting to be the real Land of Oz. One oddity in the map is that Martin has moved Pyramid Mountain to the land of the Mifkets, just south of the Quadling Country. I suspect Martin simply moved an existing detail (here obscured by the Scarecrow's hat) to a more visible location to add detail to the map.

More interestingly, Martin is the first person to have added Baum's Isle of Yew (from the 1903 The Enchanted Island of Yew) to the Ozziverse (see map above), though it is shown here in a different location (south of the Forest of Burzee) than it will be on the Oz Club map. But note, too, that Martin has also added some unidentified islands both off the coast of Merryland, and also in the vicinity of Pingaree. There is another detail I had not spotted until I enlarged this section of the map below, which is that Martin has indicated the mainland extends out to the east at the southern border of Rinkitink (see below).


When I joined the Oz Club in March 1977, the first thing I ordered was a set of the Oz Club's maps. My parents were in the midst of separating; and I was burying my anxiety in Oz research and Oz collecting. A year or so earlier I had begun a large four-foot-wide topographical Oz map with lichen trees and salt-dough mountains. Mapping the fairyland I was taking refuge in made it seem all the more real I suppose. Below you can see young me with my Oz Map birthday cake!


Oh, what a photograph! I had also begun requesting sale-lists via SASE from the Club's "Oz Trading Post," and as the Ozzy fates would have it, the first two things I bought were purchased from Oz Club map designer James E. Haff: a copy of Magical Mimics in Oz and a copy of the 1920 Reilly & Lee Map of Oz. I was very excited to see and own a "real" and "old" Oz map! The club's map set didn't arrive until after my mom, sister, and I had moved out of my childhood home at the end of April.

I must admit I loved the Oz Club's maps. They went up on my wall and stayed there pretty much throughout my teen years. One aspect of the maps that Oz fans today might not take into account is that the maps also functioned as a window into the post-Baum Oz series. Back then all of the post-Baum Oz titles were out of print and difficult to find. I had never yet read any of the post-Baum Oz books when the maps arrived and I remember spending lots of time trying to imagine what book each odd location might be from, and then, following along on the maps as I eventually read each of the later twenty-six Oz books.

Next week we will begin our detailed look at the Oz Club's "Map of the Marvelous Land of Oz" as originally released in 1962. So pack your rucksack, a canteen of Ozade, and make sure you have your compass, I'm sure it will come in handy at pointing us in the right direction!

Take me to the next Map of Oz Monday blog!

You may also go back to the beginning of this multi-part series by clicking here.
Posted by David Maxine at 12:00 AM

My parents separated around 1972, at a time when I lived out in the country and had only Oz, comic books, and an incipient interest in science fiction to get me by. But I had only Baum's books--I didn't even find out any other Oz books existed, or that there were any Oz fans outside of the MGM movie, until around 1980. It was a pretty lonely time to be an Oz reader.

Martin's VISITORS illustration is also the first map to make note of The Enchanted Isle of Yew (whose role in Baum's overall fairyland geography and universe in general has been debated). The map also includes some islands off the coast of Merryland and Noland.

While I already had the reproductions of the maps included in the 1979 edition of the book AN ATLAS OF FANTASY, I ordered them from the Club at the end of that year. They ('75 version) took a while to arrive, and Haff sent a short apology note along with them. I thought it was nice and much later I learned he was not well (he died not too long thereafter).

Thanks, Marc - I have restored my paragraph on the addition of Yew and the other unnamed islands. It got deleted at some point in rewriting. And in so doing I spotted another Martin touch, the coastline just south of Rinkitink seems to extend out into the ocean indicating a portion of the continent we are unfamiliar with!

Indeed, Jim Haff always had the responsibility to mail out the Oz Club maps. He died on October 15, 1981.

As you'll no doubt discuss, the Oz Club maps got updated to reflect locations in the books it published. I remember looking at the editions I had on my wall and thinking whether they were proper maps of Oz anymore. I imagine some earlier Oz fans with copies of the TIK-TOK maps in some form had similar experiences every year.

The Club's maps held pride of place on my bedroom wall, too.