Dick Martin and Me

In the late 1970s I was in a sort of teenage overdrive to build up my Oz collection. And with a desire to feel important, perhaps, I began a concerted effort to get most any book that I could autographed by its author or illustrator. Whether this compulsion to get these books autographed was simply about improving my collection, or was a chance to feel special (or was it grown up?) it allowed me to make contact with the likes of Russell MacFall, Margaret Hamilton, Edward Wagenknecht, and Philip José Farmer among others - not to mention Rachel Cosgrove and Eloise Jarvis McGraw.

I had assumed I would meet Dick Martin when I went to my first Oz convention, Winkies 1977, but I found that Dick was not in attendance. He only rarely traveled to Winkies. But in 1979 I finally got a copy of Dick’s Visitors from Oz and sent him a fan letter asking if I might send him my copy of Visitors to get it autographed. A few days later I got a postcard in the mail! 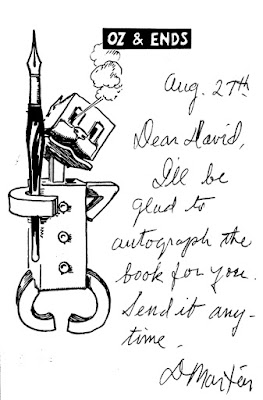 Not only was it a postcard from an actual “Royal Illustrator,” but it was an Ozzy postcard. Dick gave a very friendly go ahead to sending my copy of Visitors to him. A week or so later it arrived back to me, all nicely signed with an Ozzy inscription and a little drawing of a moon.


As an extra little present, Dick also included one of the very rare Reilly & Lee advertising Gumps for me! We exchanged letters, I told him about my collection, he told me about his Oz projects. Not only was he in the midst of illustrating the new McGraw Oz book, The Forbidden Fountain of Oz, but he was also just starting his series of cut-and assemble Oz activity books for Dover. From 1979 through the mid-1980s Dick was in a kind of Oz illustrating renaissance.

When I asked if he ever sold any of his original art, he wrote that it was all gone, as he’d given it away to friends. A few months into our correspondence I found a box of unused greeting cards at Goodwill—the cards featured his little “DM” as a signature. I sent him one and he wrote back confirming it was his work. He also included several other examples of his greeting cards, all from the mid-1950s.

We finally met at the 1980 Ozmapolitan Convention. He was cordial but very quiet and reserved. But after dinner on Friday evening before the programming began, Dick came over to me and asked me to come up to his room. I must admit I tensed a bit. Even though in 1980 I was not out (even to myself) I somehow knew that Dick was gay. Perhaps it was his rakish photo in The Oz Scrapbook? Perhaps it was because he reminded me of Tony Randall in a sort of dapper way? We went up to his room and he shut the door. He pulled an envelope from his suitcase and from it all of the original art from The Forbidden Fountain of Oz spilled onto his bed. He said: “Pick one you like—I’m letting you have first choice!”


I chose the drawing above. Then he asked me to please not tell anyone at the convention about the gift or they’d all be bothering him. I thanked him. Before we left his room he said, “I often have a few quiet friends up to my room to talk and have a drink after the programming is over. If you’d like to join us, you would be most welcome.”

I did go to Dick’s room for a while that night and several other nights at later Ozmapolitan Conventions, too. Dick was very quiet at his parties. He was always the center of attention, drinking a good deal, telling complicated jokes, performing magic tricks; he was quite simply holding court!

I’m still unsure why he pulled me into his inner circle so quickly - perhaps he just saw some of himself in a quiet (eventually-gonna-be-gay) teenage boy Oz collector. Who knows? In any event he made me feel very special at my first Ozmapolitan Convention.

I'm editing a podcast with a guest who recounts the time Dick Martin let her pick a piece of artwork from an illustration project.

Thanks for sharing this, David!

It's moments/reasons like this that make me wish I could (have been able to somehow) meet Dick Martin ... he sure sounds like a swell guy!

I'm certain I already read this in a Baum Bugle or Winkie Con Programme, but it's nice to re-read it online.

I look at that picture of Dick Martin at the auction and think, "Is that my Woozy?" I know Karyl Carlson has made many Woozies over the years, but I like the possibility that the one on my bedstand now was once held by Dick Martin.