A couple weeks ago one of my readers asked why there seemed to be so little information on 1950s Oz and Baum illustrator Dale Ulrey. Indeed, no Oz folk seem to have ever even seen a photo of her! Might something be done about this? While a basic internet search proved rather fruitless, popping into a couple of Eric's and my genealogical resources turned the trick!

Mildred Dale Conner was born January 1, 1904, on a farm near Sulphur Springs, Texas. Her father was William Madison Conner (1870-1936) and her mother was Nellie Nichols (1872-1949). The family moved to Dallas in 1916 where her father became a salesman for Butler Bros., a department store and mail-order firm.

Young Mildred seems to always have drawn. The Dallas Morning News, September 2, 1939, wrote of the small brunette: "Before she was old enough to enter school, the future artist drew sketches of people. Her consuming ambition as a child was to 'write a book and draw all the pictures.'" She finished grade school at John S. Armstrong School in Highland Park, Texas, and spent all four years of High School at Oak Cliff High. She graduated in 1921.


Her year book says: "Some one has described Mildred as the little girl with the 'come hither' eyes and it's not such a bad description. Besides being very easy to look at, 'Cricket' can draw almost anything on earth - even a crowd." So little Mildred had the nickname of "Cricket." Oh, the things one can discover online! Cricket spent all four of her high school years on the staff of "The Acorn," the Oak Cliff High newspaper.


She apparently adored her art instructor, Nellie Clement, and according again to The Dallas Morning News, two of her classmates also found art careers: Commercial artist Jewel Brannon of Fort Worth, and Lansing "Lance" Nolley, who went on to have a very full career working for Walt Disney Studios. See the "comments" section below for more information on Lance Nolley.

She spent another year in what the newspaper calls "post-graduate work" at Oak Cliff High studying art and Advanced French; and spent a year at the University of Texas "concentrating on line drawing and technical drawing." She also studied anatomy and life drawing with Vivian Anspaugh. While still studying in Dallas she began work in the art department of the Palace Theater.

Dale must have enjoyed her movie theater art work as she moved to New York (for the next twelve years) where she worked for Hap Hadley's theatrical art studio, handling publicity for many of the major movie studios.

Her earliest cartooning work seems to have begun when she started working for Martha Orr, creator of  the comic strip Apple Mary, later renamed Mary Worth's Family. In 1937, Orr married, and turned over all of the drawing chores to Dale.

You can read the entire and fascinating history of the transformation of Apple Mary into Mary Worth, here, in this Comics Journal essay. But Conner's reasons for departing from the strip are best summed up here, in a letter she wrote to fellow cartoonist Milton Caniff: “I’m so heart-sick over what Apple Mary has turned out to be. Working on it has become a chore. There’s no action to draw, only dull and childish conversation, and the plot is so inane that I gag as I try to make something of it. I dread seeing the proofs each week for my feeling shows in them.” 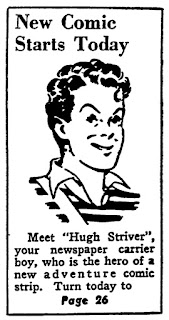 Sometime between September 1939 and April 1940 Dale Conner married Frank Herbert Melville Ulrey (1898-1958). The 1940 census shows them living in Chicago. Herb Ulrey was a navigator in World War I and after the war continued his work as a navigator, working for Sir Thomas Lipton, the famous yachtsman. A 1942 Dallas newspaper article states that Herbert Ulrey had previously drawn his own comic strip about a "G-Man," but I can find no information on or evidence for this claim.

Soon after their marriage, Dale quit Mary Worth's Family and she and Herb developed a new strip called Hugh Striver, relating the adventures of a newspaper boy; it debuted October 5, 1942.

Hugh Striver seems to have been only moderately successful. It came to an end in February 1945. You can see the first strip below:


For a time the Ulreys lived in Barrington, Illinois, (on Bateman Road) and in August of 1943 they had a daughter, Dale Caroline Ulrey.

In April 1945 Dale Ulrey launched a new "adventure" comic strip that she both wrote and drew called Ayer Lane, about a young man with an airplane. This strip ran until sometime in 1947. 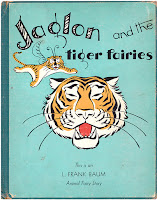 Dale Ulrey began her association with Oz publisher Reilly & Lee in 1953 when she illustrated L. Frank Baum's Jaglon and the Tiger Fairies. The cover has always struck me as extremely dull. I suspect the blame should be placed with Reilly & Lee, not Ulrey, as anyone with Ulrey's skill and gifts at composition simply could not create such an uninspired cover.

Compare the cover to one of the interior illustrations shown below. It is lovely, beautifully executed, and thoroughly charming. 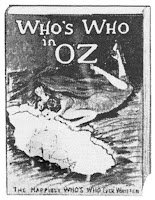 In 1954 she designed a dust wrapper for Jack Snow's Who's Who in Oz, but it was used only in advertisements for the book, being replaced by the yellow and red jacket based on the endpapers of The Royal Book of Oz.

There are a number of drawings by Ulrey for Ozma of Oz. No such edition was ever published, and given the fact that they were executed in varying techniques, I suspect they were work samples. You can see more of these on Bill Campbell's Oz Enthusiast blog. One of the prettiest is seen below. 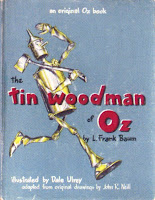 Reilly & Lee must have liked the samples because in 1955 Ulrey began a project to re-illustrate the Oz series with a new edition of The Tin Woodman of Oz. Presumably the publisher thought more modern illustrations would help invigorate sales.

While most Oz fans would argue that Neill's original illustrations are inseparable from Baum's text, Ulrey produced a very handsome volume. You can see and read much more about Ulrey's edition of The Tin Woodman of Oz in this previous blog post.


The next year, in 1956, Ulrey got the honor of illustrating the first edition of The Wizard of Oz to be published by Reilly & Lee.


Ulrey's illustrations are handsome, though not as successful as those she did for Tin Woodman. They were all printed in two colors.


Herbert Ulrey died on January 29, 1958, of a cerebral hemorrhage. At the time he and Dale were living in Hickory, North Carolina, on 450 3rd Avenue Drive, S. E., though I can not yet find when or why the family had moved to North Carolina, but it was after 1951.

After her 1956 Wizard of Oz, Dale Ulrey may have retired, as I can find no evidence that she did any additional work in either comics or illustration. Dale died October 14, 1989, in Dallas, Texas. It seems an absolute crime that no one ever interviewed her for The Baum Bugle or tried (as far as I know) to get her to a convention. Such missed opportunities! We will take closer looks at Ulrey's edition of The Wizard of Oz in the coming weeks.
Posted by David Maxine at 5:53 PM

Thanks for the tip, John!

So my readers, Dale Conner's high school classmate, Lance Nolley, who is mentioned in the above blog post, went to work for Disney just before the premiere of SNOW WHITE. He is credited as an Art Director on FANTASIA and THE RELUCTANT DRAGON; and as a Layout Artist on MAKE MINE MUSIC!, MELODY TIME, MR. TOAD, CINDERELLA, ALICE IN WONDERLAND, PETER PAN, and LADY AND THE TRAMP. His IMDB credits are even more extensive: http://www.imdb.com/name/nm0634486/

Huh. Who knew that she was a DFW girl? I know Peter Hanff mentioned to me that there was (or is) a major Oz book collector in Dallas...maybe they spoke with her? The name completely escapes me now, sadly.

I wish I could form a solid opinion on Ulrey. There are times where I really love her artwork and think "Man! I wish she had done more Oz!" (Like her work in Tin Woodman, or what I've seen from Ozma) but then there are times (some of her work in Wizard) that I think "Well, no wonder it didn't sell..."

I think THE WIZARD OF OZ is a very intimidating book to many illustrators. Between Denslow's very distinct original illustrations, and the iconic imagery from the MGM movie, there is a lot of very different criteria that folks are going to judge you on. I'm sure Reilly & Lee weren't much help "probably" insisting that the pictures look very modern and "up-to-date."

I absolutely agree it is a shame no one contacted her while she was alive. I like her 'modern Oz' better than Copelman's (who fortunately was interviewed before her death). I wonder if any of her descendants could be contacted?

My copy of Dale Ulrey's "Wizard" has red in the illustrations (and my dustjacket is in a much poorer condition in comparison) and a Map of Oz in the front endpapers (which has the cactus and bones).

One thing I definitely wish is that (aside from Dorothy's hair length and a few other moments) the final illustration of reunited with Aunt Em wasn't covered up by the final chapter's text.

Sam, as it turns out you have a first printing of the book, which had red as the secondary colors in the entire book and the Oz map endpapers. I don't actually have any jacket at all for my copy. The scan in the blog isn't from my collection.

I wonder if the copyrights on her WIZARD and TIN WOODMAN illustrations were ever renewed. If not, would they be public domain now?

I have an original drawing that was sent as a "get well card" to my dad in September,1941. The return address and post Mark are both Marengo, I'll, which is near Barrington. If you are interested, I can email a photo.

THANKS! That would be super! You can email me directly at: orders@hungrytigerpress.com

I am so trilled to find this blogpost. I am looking right now on my wall at an ink drawing of Dale's living room and her dog Beauregard and cat Lucy in Hickory, North Carolina from the 1950s.. I always called her my second mother and she called me Daughter II. I have some of her drawings and letters. She really had a salon in a conservative southern town in the 1950s and 1960s. I went to nurse her as she was dying in Dallas, where she had gone to care for her sister. She helped many of us in some difficult years and we called ourselves Chez Hickory. After she died, I found a large number of her letters with Milt Caniff, which I have given to her daughter in Ithaca, NY. I don't have time to write much more now, but a Katherine Bowell friend has a large collection of her books in Salt Lake. I can give contacts if anyone is interested. Email me at magrange @me.com (major) or alternate: magrange18@gmail.com Maggie Range