One of the pleasures of attending World Con last week was the chance to browse the bookshelves in the Dealers Room. I found several neat little books and quite a few more books at a couple bookstores and antique shops on the drive up and back.

One of the books from World Con proper was Enoch the Philistine by LeRoy Hooker published by the Rand McNally Co. in 1898. I bought it because it features a rather elaborate cover design by W. W. Denslow, illustrator of The Wonderful Wizard of Oz. 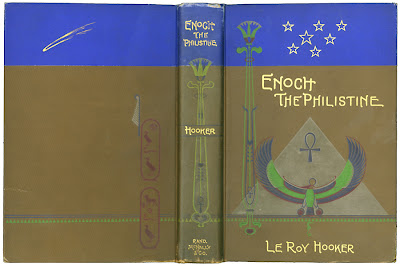 I have a number of books with Denslow covers, but what struck me about this one in particular is the unusual use of a second cloth to create part of the image. The royal blue evening sky is created by applying a blue cloth over the desert brown cloth. There is also quite a bit of gilt stamping: the title and author's byline, the stars at the top, and the comet on the back.There are also four stamping colors in addition to the gilt: dark blue, bright green, a bloody brick red, and the light sandy gray of the pyramid which seems a bit faded.

The book is subtitled "A Traditional Romance Of Philistia, Egypt And The Great Pyramid." The announcement in Publisher's Weekly of November 5, 1898, says, "the story of the spiritual significance of the Great Pyramid is supposed to be told in the words of Enoch, a shepherd of Philistia, who superintended the erecting of the monument according to directions supposed to have been found in the Roll of Enoch the son of Cain. This builder was a great astronomer and arithmetician, who also built the great Egyptian canal and changed the current of the Nile. He live to be one hundred and four score years. His tender love for his wife Zillah furnishes the romance of the story, which is really a historical picture of the days of Abraham and Melchizedek."

If by chance that blurb has piqued your curiosity enough to want to read the book, here's a link to a free online version.

I'm more intrigued by the cover, which features not only a comet (my favorite sky subject), but what I believe to be the Pleiades, or Seven Sisters constellation. I'll have to read the story to see if they play a role in the story. I do know that Orion the Hunter is aligned with the pyramids in ways that would take too long to explain here. Perhaps another day...

That's very interesting - I never noticed the actual two fabric aspect of the cover before. Of course, I had to run and check whether the same technique was used on any of the other titles I have, but none appear to be done this way.