The Bradford Exchange has begun reissuing the fourteen Baum Oz books in facsimile editions. They are a bit pricey, but considering the limited sales potential, I think they are fairly priced. The closest any other publisher has come to facsimiles is Books of Wonder's hardcover series - though they never claimed to be true facsimiles. Please click on any of the images to enlarge them to look at the details.

The Bradford books are handsomely produced - especially the stamped covers. But their reproduction of the color plates is sloppy and IMHO inept. Now some might say there isn't anything better out there, and I'd have to agree. But Bradford wasted a huge opportunity to do it right. Considering the money spent producing these volumes, it's a shame they didn't have a better graphic designer prepare the scans of the color plates.

For the sake of this critique I'll focus on a single plate from The Marvelous Land of Oz. I picked it at random. It shows Jellia Jamb serving as translator when Jack Pumpkinhead meets the Scarecrow. The Bradford printing is shown at left. At first glance it doesn't seem awful by any means.

In the original 1904 printing you can see there is some plate damage on the left hand side of the image, as well as that dark greenish blue edge. The original plates are also a little bit out of registration (the four printing plates for the different colors are not perfectly aligned). Now perhaps the Bradford Exchange, in their desire to create facsimiles, felt a need to reproduce the plates "out of register" as indeed they are in the original edition. But the Bradford image is even more out of register (than my copy anyway) and the throne, canopy, and Scarecrow are all much darker. The Bradford plate above is very grainy, too, probably from too much "sharpening" by their graphics person. Both images were scanned at 600 dpi with the same basic settings for this blog.

But in my opinion the most disappointing difference between the two is the loss of all the detail in the original line art. Here is a close-up of Jellia Jamb's face. The original is on the left, the Bradford is on the right. These are both unadulterated scans from the two books. 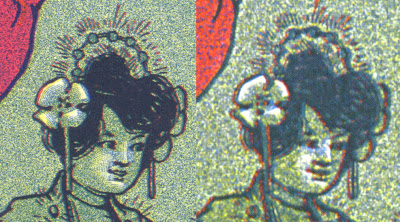 It's just not good enough - and when one compares section by section, ALL of the color plates suffer from this problem of grainy, blobby, detail-less reproduction. Some of this loss of detail comes from the aforementioned poor registration of the Bradford printing. But if my basic scan above can capture the detail, then they should have been able to do so as well. Is Bradford deliberately not fixing things like bad registration because the first edition is also out of register? If that's the case, I wonder if we will get an ugly glue blob on page 221 of the Bradford edition of Ozma of Oz. The registration in Bradford's The Marvelous Land of Oz could have easily been fixed. Just to see if it were possible, I took my basic scan of the original plate above and attempted to bring the four colors into registration.


It took me seven minutes of work, including scan time, to align the image - and my results would have been better still had I scanned it at 1200 dpi instead of 600. Personally I would prefer the color plates looked good rather than accurate. Sadly, Bradford's color plates are neither.


[A review of the Bradford Exchange edition of Ozma of Oz can be found here.]
Posted by David Maxine at 5:57 PM

When someone like me, who doesn't even own a first edition Baum, can point out there's a problem, THERE'S A PROBLEM!

Thanks for those Jellia close ups. I love your "correction." It looks wonderful!

Might I add that Books of Wonder was able to reproduce the color plates adequately for their mass-marketed edition?

Thanks, Jared. I feel bad to be coming down so hard on the Bradford series. I want to be supportive. So much is really good about these reissues but when I look at that example of Jellia I created it makes me want to pull my hair out.

It's like buying a Rolls Royce with Naugahyde upholstery.

Oh, my Books of Wonder is in storage or I'd have added their repro to my line of Jellia too. How does it compare?

Had the Bradford Exchange thought it through, they would have contacted the Oz club and eventually found you folks, who could have offered your expertise and knowledge. Thus we would have gotten a much better product. I, for one, could not afford these, so I'll just stick with my first editions that I bought over the years through ebay when I had more money.

I wonder what they did to mess it up. Are they attempting to do the multi-plate process without using the actual equipment used in 1904?

If you were to make three versions of the plate: the cyan, red, green, and black, and then attempt to print them over each other, I bet they wouldn't look very good.

As for the BOW edition, as I set up a new scanner today, I went ahead and scanned it in at 600 dpi. It must be noted that BOW used a very different method of printing, due to mass-marketing. https://picasaweb.google.com/lh/photo/1xXxsaoeW1bbSRmBXl2qjQ

Actually Jared the printing process is almost unchanged from 1904 and the original, BOW and Bradford books would all have been printed the same way. What's different is how the source material is created.

In all three cases there are still four passes thru the printing press - one for each color ink. In most color printing in the 20th century the original would have been separated into four plates photographically by using different colored filters. These were transformed into the four printing plates and voila! full color. It's actually much easier now as traditional book printers have almost universally switched to digital source material. So to print my "improved" Jellia plate all one need do is scan it, save it as a CMYK file, create a PRESS quality PDF file and email it to the printer. The separations are created directly from the PDF now. So what the designer sees on screen is what the printing press is going to spit out generally speaking. I'd guess the Bradford books are printed on the same WEB style press BOW's books were printed on. But in any case, from the designer's point of view, he'd be submitting the same PDF whether it was going to be a huge mass-market press or Lulu or any other POD printer.

Thanks for that. It just boggles my mind on how they got the rest right (except the dust jacket, but let's not go there) but not the color plates.

This is fascinating, David. I immediately wondered how the Books of Wonder illustrations had compared, as that was the edition where I first saw a lot of the color work from Neil, and I thought they were wonderful. But I didn't know enough to be critical, and still don't, for that matter. Then again, I loved the illustrations when all I saw were black and white Neil art in the public library copies in the 60s. But I'm glad to have the explanations in these comments about the BOW copies, and I gather a scan from someone else that I'll try to look at. --David Lenander, d-lena@umn.edu

I'll try to add another row of Jellia's with the BoW version tomorrow.

After listening to both yours Jared and others comments I think I'm not forking out money on this set and will with my BOW set.